Hazard has been enhanced using nanotech. His speed, agility, reflexes, endurance, strength and most of his senses are now superhuman.

Hazard is also a top bounty hunter, with lots of experience and talent for his job. Unlike many skip tracers, he’s highly skilled and experienced in combat, armed and unarmed. He’s also pretty good at improvising under pressure.

Carolyn, his assistant, is a skilled researcher with solid computer skills.

Alex Hutton lost his parents when he was eight. They were going to appear as witnesses in the trial of corrupt cops in Chicago when a bomb blew up their car. He was raised by his grandfather, a hunter and tracker who lived in the Rockies.

The old man was an hermit. He distrusted organisations such as police departments – a dislike he transmitted to his charge, along with various hunting skills.

When the old man died, Hutton came back to civilisation in his grand-da’s Range Rover. He eventually became a bounty hunter, working out of the rich market of Las Vegas. Hutton rapidly became known as a formidable manhunter.

Hutton was singled out by Doctor Emilio d’Oro, a scientist working for Kaizen Gamorra. Hutton was deemed an excellent test subject, with top-notch physical fitness and great skill and experience. The goal was to produce a perfect assassin for Clan Gamorra. D’Oro intended to reach this objective using his experimental solution of nanites .

An ambush was mounted, replacing Hutton’s current prey with a cadre of Hunter-Killers. D’Oro shipped Hutton to Gamorra Island, then successfully transformed Hutton into a superhuman within a few days. He named his creation “Hazard”. He then demonstrated to the bounty hunter how he could create great pain in him at will, or even kill him.

Furthermore, he told him that the nanites would replicate themselves at a sustained pace and kill him within two weeks, unless d’Oro were to administer further treatment.

The initial plan was to send Hazard to kill Weatherman One, Stormwatch’s commanding officer. However, at that point, a huge rebellion broke out in Gamorra. A fierce superhuman battle erupted, resulting in quakes.

One such quake allowed Hazard to flee the lab. From there he found his way back to the US via plane. D’Oro simply fled, knowing Hutton would have to track him down soon or die.

After various adventures, Hazard zeroed in on d’Oro. He discovered that the scientist was planning to take control of Los Angeles by spraying a new version of his nanites over the town.

Hazard chose to destroy the abandoned oil rig on which the Gammorran had made his base. That would take out d’Oro and thus Hutton’s chances of survival, as well as some unfortunate guards, but was the only way to save L.A. At that point, 14 days had gone by and Hazard was on his last 24 hours.

However, the nanites simply didn’t do what they were supposed to – or maybe d’Oro had lied all along). Hazard is still active today, acting a bit like a super-hero but paying his bills with his bounty hunter job.

Hazard usually wears a blue jean trousers and vest, and a black T-shirt.

The ideal hero for your average 13-year-old boy boy whose imagination has been fed entirely by bad American TV series and B-movies from the 1980s. He’s super-cool, assured, manly, always gets the girl, says cliché threatening things, has cool guns, is ultra-competent, etc..

He doesn’t like to kill, but does if he has to ; he pretends to be just mercenary, but obviously care for the underdog, etc.. And, of course, he’s a Cool Loner™ who doesn’t work with organizations and does things his own way while looking seven shades of good.

“Cut the small talk, guys. I came here to pick up Leo Kyle.”

Just drop him in DC’s Las Vegas. No need to get sophisticated about it.

His assistant has Scientist (research): 05 and Scientist (computers): 05. 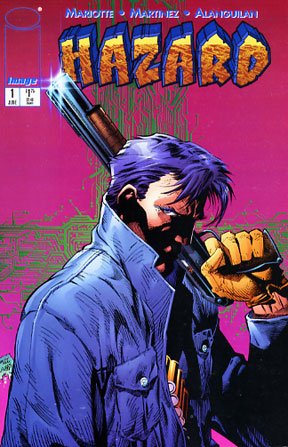 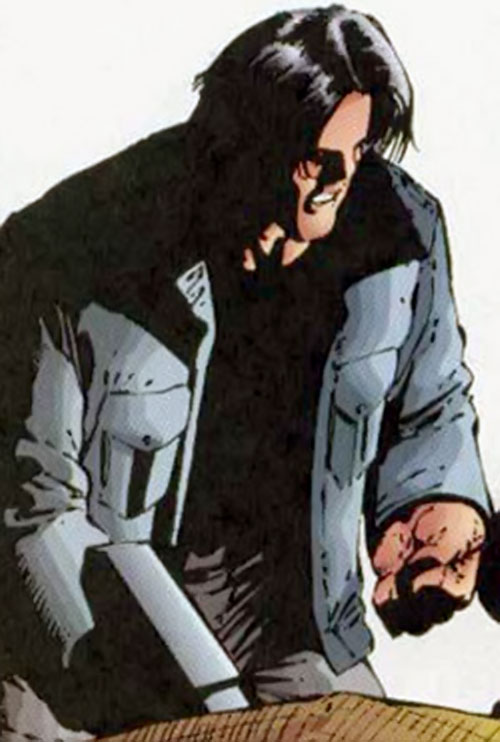 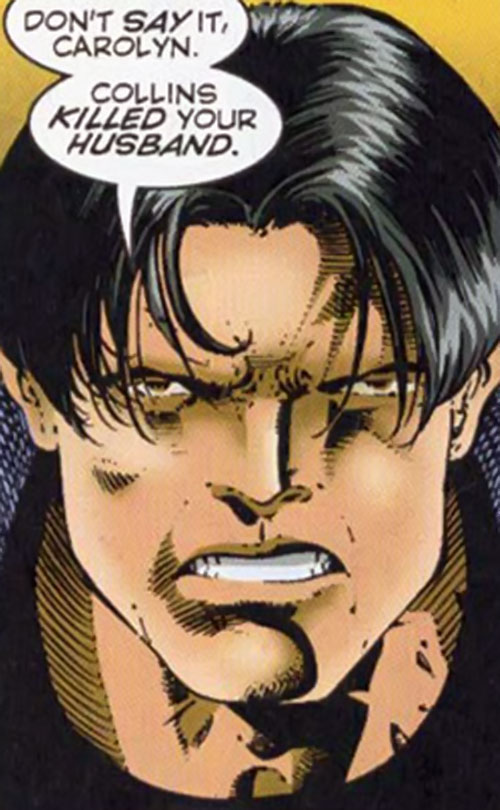