The Headsman appeared some 1996/97 Spider-Man stories, but the bulk of his appearances was in 2009/2010 Thunderbolts story arcs. Being associated with Norman Osborn, Headsman had returned during the Dark Reign arc  during these years.

If you’re not familiar with this era of Thunderbolts, you’ll want to first read our Thunderbolts team profile for context.

He’s a big tough henchman with a big tough axe, and simple but working aesthetics. As such he’s quite handy to have.

He’s a competent brawler, physically powerful and fast. The Headsman is also skilled with his axe.

The axe he wields is charged by the power pack on his back, sometimes via a cable connecting them. That enhances its cutting ability. In his hands, the blade can thus slice through brick, stone, steel, and even Spider-Man’s webbing.

He also flies about on a hover platform. This is an early design of the Green Goblin’s glider, which can fly up to 75 mph. His mask contains a noise cancellation device, protecting him against sonic attacks if he can activate it in time.

His equipment had failsafes in, which allowed Osborn to deactivate them whenever he wanted. It’s unclear whether these have since been removed.

Growing up the runt of the family, Cleavon felt the need to prove himself. This eventually led him into a life of crime. He was recruited by a secret figure (actually Norman Osborn) to field test the technology which would later be used by the Green Goblin.

When sent to recruit the Enforcers, Cleavon, now the Headsman, fought Spider-Man and forced him to flee. Spider-Man tracked them down, and managed to damage the cable connecting Headsman’s axe to his power pack. This forced the criminal to flee.

Taking umbrage at the defeat, Headsman decided to take revenge on the wall-crawler. His equipment fixed so the axe and power pack were no longer connected, he attacked Spider-Man. Believing he’d killed him, Headsman gloated to a potential employer about it, only to become enraged when he found out he’d been fooled.

Going on a rampage after Spider-Man, he was beaten when the Green Goblin confronted him, deactivated his equipment and beat him up for ruining his plans. Arrested, Twain went to jail.

Years later he was pulled from jail by Osborn, who recruited into his new black ops Thunderbolts team. Osborn’s main motivation was to have someone to impersonate the Green Goblin to throw suspicion of recent sightings off him. Cleavon’s experience with the technology, and his limited ambitions, made him a suitable agent.

After impersonating the Goblin on their first mission, Twain soon reverted to the Headsman identity. But he continued to serve with the team. The Ghost revealed to him that he’d fixed a fault with his Green Goblin equipment before the mission, implying Osborn had set him up to die during the operation.

He got along best with Ant-Man (O’Grady) and Paladin. On the other hand he had confrontations with Mister X, who enjoyed needling him. X was aware that Cleavon wouldn’t want to back down even knowing how outclassed he was.

His career was cut abruptly short. A suggestion placed in Scourge’s mind by the Uranian forced Scourge to try shooting Osborn when he next saw him. Unfortunately the team were standing around a hologram of Osborn when this triggered, and Scourge shot through it. The shot caught Headsman square in the head and killed him instantly.

Shortly after the team disintegrated during the siege of Asgard, O’Grady tracked down Cleavon’s brother, Cody. Ant-Man told him how Cleavon had lived and died, leaving him the Headsman equipment.

Feeling the need to prove himself, Headsman never backs down from a fight, even if he knows he’s outclassed. Instead he lets his temper have free reign, and he can become easily frustrated and enraged in combat.

Relatively easy-going out of costume (unless riled), he was among the more sociable of the Thunderbolts.

Despite his desire to be seen as a tough guy, he does have a certain moral line he won’t cross. For instance he was the first to act against Osborn’s orders when it came to executing Songbird and the Black Widow. He even turned against his team mates even though he had little chance (if some of the others hadn’t joined him).

“I’m the Headsman ! And mine will be the last name you will ever hear !”

“Okay smart asses, what do you call a chicken that crosses the road, rolls in the mud, and crosses back over ? A dirty double crosser.”

“If you killed Mr. X, well — my hat’s off to ya, is what. But you’re still going ta get busted up, Headsman-style.”

Some sources claim his suit enhances his strength. But there’s insufficient evidence to confirm this. 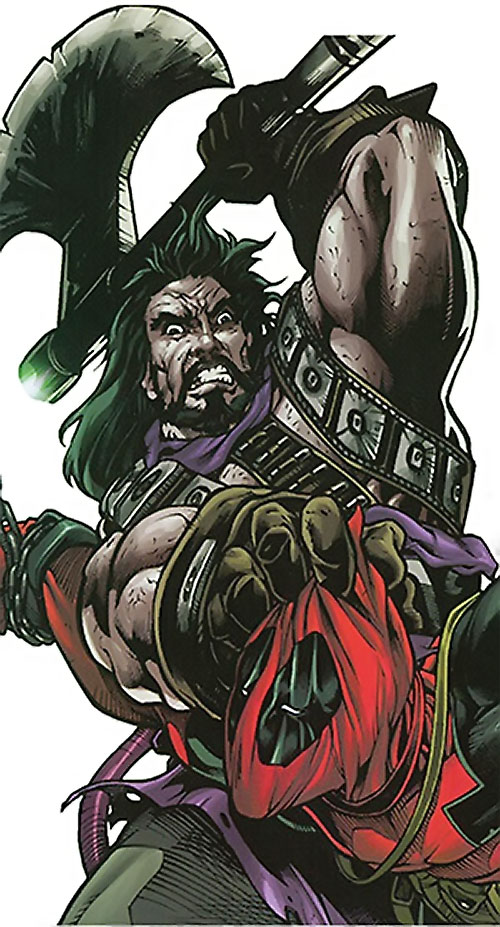 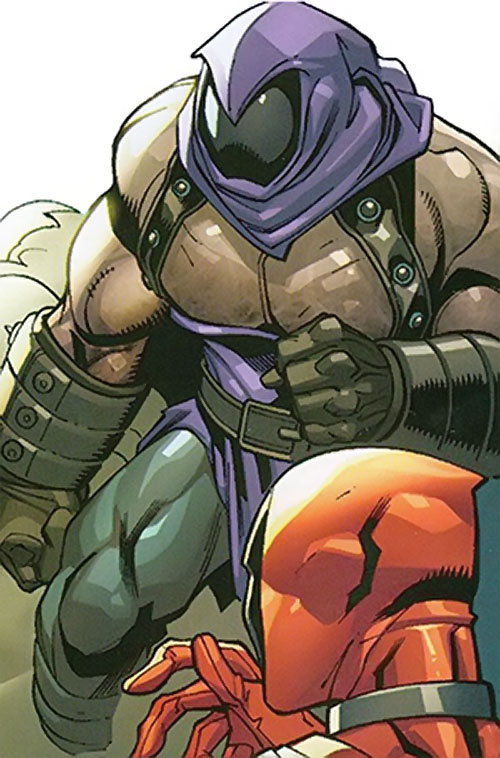