Heat Wave’s only weapon is his unique flamethrower gun, powerful enough to melt steel. His asbestos suits protects him from the fire and heat (allowing him to often be partially covered in flames, resulting in DC Heroes terms in the Flame Being power for the suit), and also contains the concentrated liquid reserves to recharge his gun.

Heat Wave also wears in his left wrist a projector device charged with a fire-control liquid. As a veteran Rogue, Rory is a master when using his gadget and also an OK thief and hand-to-hand fighter.

Mick Rory was fascinated with fire from his childhood on a farm outside Central City. He would stare at flames, and try to hold them even if holding the flame got him burnt. His obsession came to a head one night when he set his family’s house on fire. He couldn’t take his eyes of the flames long enough to run to a neighbor for help.

His uncle raised him after that, though he continued to be obsessed with heat. One day, on a school field trip to a slaughterhouse, a friend locked him in a walk-in freezer as a joke. Mick escaped, and was compelled to lock his friend in his house, and set it on fire.

While Mick Rory recognized himself as a pyromaniac – an actual, obsessive-compulsive pyromaniac, not the neighborhood kid who just likes fire. He often cited this freezer incident (leaving his friend’s death part out of it) as a trauma that left him cryophobic and desiring heat and flame. Knowing he couldn’t stay, he ran away from home, eventually joining a circus as a fire-eater.

He thought he had his obsession under control and enjoyed having friends and the circus lives for many years, but he broke down again, and burned down the circus.

Desperate to fight his insane impulses, Rory was inspired by news footage of Central City’s Rogues to channel his obsession into a new identity. He invented a handgun-sized flamethrower, put on an asbestos suit, and began committing crimes as Heat Wave.

Naturally, he became a regular opponent of the Flash (Barry Allen). He also developed an intense rivalry with Captain Cold, who introduced him to the rest of the Rogues’ Gallery.

After some years in and out of jail, Heat Wave seemed to win his struggle with his pyromania. He went straight and even became friend with Barry Allen (Flash), having unmasked the unconscious hero some time earlier.

He began working as a firefighting consultant, using his knowledge of heat and flames from his former criminal career. He didn’t know he was under the influence of the Top’s mental powers, though.

When Barry Allen died saving all of reality from a vast Crisis the Rogues realised that they had lost their passion for crime. Without their old adversary it wasn’t the same, despite a new Flash emerging. Heatwave had some half-hearted confrontations against the new Flash and also Green Lantern and Green Arrow but soon grew tired of a life of crime.

Even Rory succumbed to temptation, though, when Abra Kadabra made him and four other Rogues an offer that would bring them respect. An offer that would “guarantee that they would be remembered forever not as has-beens… but as the most infamous villains of their age.” What Kadabra did not tell them was that it would cost them their lives.

The five died, and unleashed the demon Neron upon Earth.

Heatwave returned when Neron animated his body, along with the other Rogues, in an attack against the Flash in Central City. Heatwave had vastly enhanced powers and an avatar of flame to aid him. Flash managed to trick Neron into repairing the damage caused and restore the Rogues’ souls to their bodies. Heatwave saw this as an opportunity to retire.

However, he was later called back into a life of crime by his fellow Rogues. This time the Rogues were searching for a Zhutarian religious artefact, designed to protect them from Nero’s power. Vastly outclassed, the Rogues were rescued by their sometime ally the Trickster, who convinced Nero to leave them be.

Heatwave then saw another reprieve in his life and so left the Rogues to join the Zhutarian monks, hoping to make amends for his criminal ways and avoid another trip to Hell. After leaving the monks, Mick retired his Heatwave persona and worked for Project Cadmus as an agent.

After leaving Cadmus, Mick left for the Quad City area in Illinois, occasionally acting as a crimefighter. Recently Rory was hired by the F.B.I. to help the reformed Rogues (led by the Trickster) to apprehend the psychopath Murmur, who escaped only thanks to Heat Wave old nemesis, Captain Cold.

When the Rogues War between the Reformed Rogues and Captain Cold’s Rogues was at his peak (and in the middle of a furious duel between Cold and Heat Wave), the Top appeared and started to “correct” the mental changes he did on Rory.

At this stage of his career, Heat Wave is 40.

Mick Rory’s life has been a struggle between his desire to live a normal, happy life and his severe pyromania. Despite having apparently successed in ocasions, his illness is always waiting for a moment of distraction to emerge again and destroying his life.

Not being a bad person, Rory has often felt guilty about that, but he now admits the illness is stronger than him, and that the Rogue life is the only way to unleash his love for uncontroled fire in a semi-rational way… and also the have friends who can survive his outbursts.

While working he has a cold, controled behaviour. But Rory’s façade disappears in the presence of sudden, violent flames, which trigger a paralyzing ecstasy in him, from which he can only wrench himself with great efforts. When not on the job, Rory is a nice guy, popular with girls, and makes friends easily.

During his Silver Age career, Heat Wave and Captain Cold kept a rivalry going, mostly due to their opposite weapons. Rory also resented Cold’s leadership and enthusiasm for the criminal life.

“They say I’m only an ex-con with a handheld flame thrower. They’re wrong. I’m a man who has seen Hell. I’m a man who’s been surrounded by Hell. And a man who raises Hell. It’s what I do. It’s what I’ve always done. Because I don’t have a choice.”

With Spider-Man being the most Flash-like character in the MUverse, Heat Wave can become simply a Spider-villain, joining the Sinister Six. Rory probably reformed after Inferno (like some other second-string rogues trapped inside that hell), and was helped in his recovery by Peter and MJ. He then joined Project Pegasus, keeping in line the villains and monsters jailed there.

But Rory’s recovery was a trap, organized by a demented Harry Osborn, the Green Goblin. Osborn unleashed the villains just before the “Child Within” saga, trying to show Spider-Man how one can’t just suppress one’s evil side. Heat Wave may now act as a hero or villain, depending on campaign needs.

Heat Wave’s pyromania works in two differents ways. First and most obvious is his passion for see things burning and start fires and using his flamethrower. The second is the shocking epiphany he experiences any time he sees a sudden, strong, violent flame, someone extinguishes a big fire and other fire-related issues.

This works mostly as a Traumatic flashback, keeping Rory’s shocked or acting insanely ; for example when the Flash extinguished a fire, the then-reformed Rory attacked him saying “you killed the beautiful flames !”

During the time Heat Wave was in the side of angels, his motivation was Unwanted Power and he had the following Connections (in chronological order): Flash II (High), Cadmus Project (Low), Zhutanian monks (High), Reformed Rogues (High).

Rory also had the Mistrust drawback most of the time, as most people weren’t aware that he was reformed. 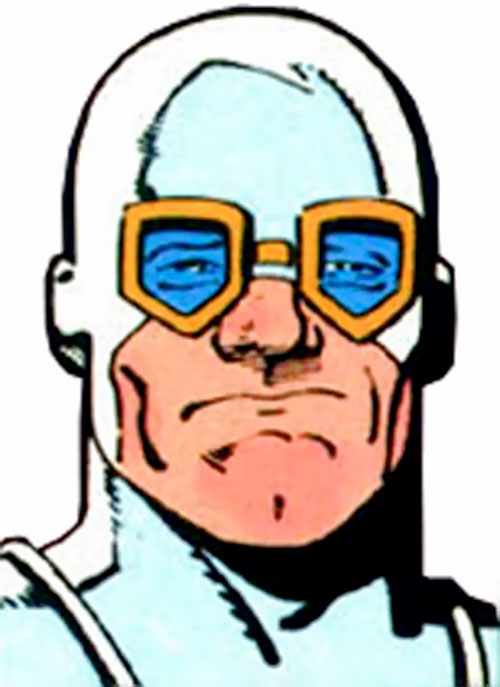 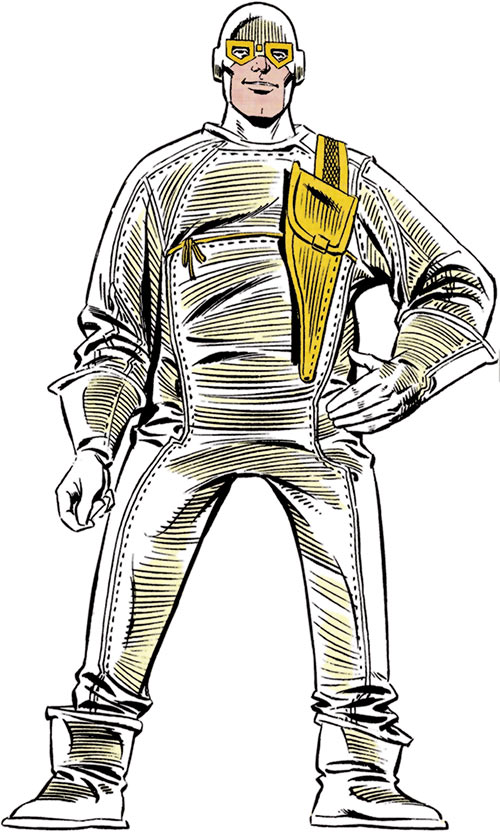 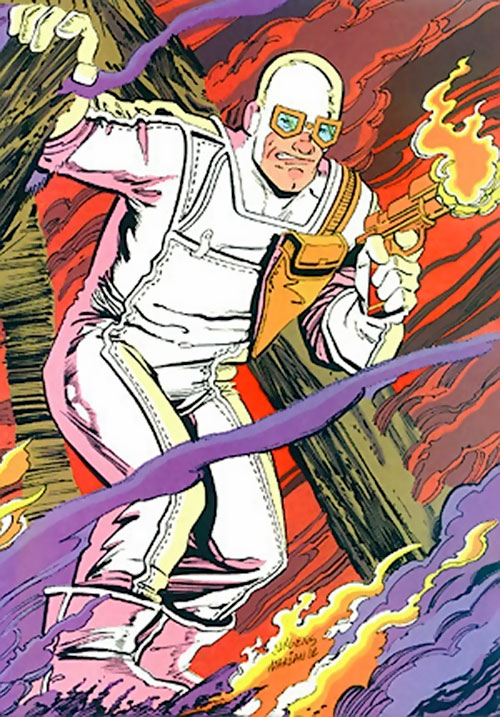 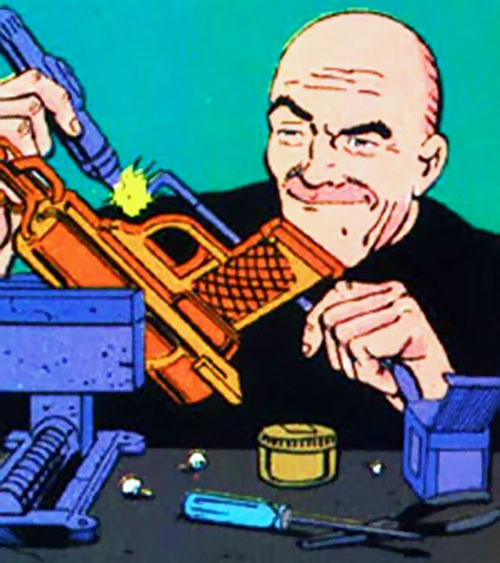