This profile is intended to be read after the Masters of Disaster team profile. Which explains all the background.

Trust me, it’ll be great. Just bring a bottle of water and a fan.

Our game stats assume that she’s resilient toward heat and flame. But that was never demonstrated.

Heatstroke’s body temperature is extremely high. Touching cold objects may result in frostbite. Physical contact with Coldsnap results in even bigger thermal shocks, which has significant odds of knocking both of them out.

On the other hand, Heatstroke and Coldsnap are good at coordinating their attacks and tactics. 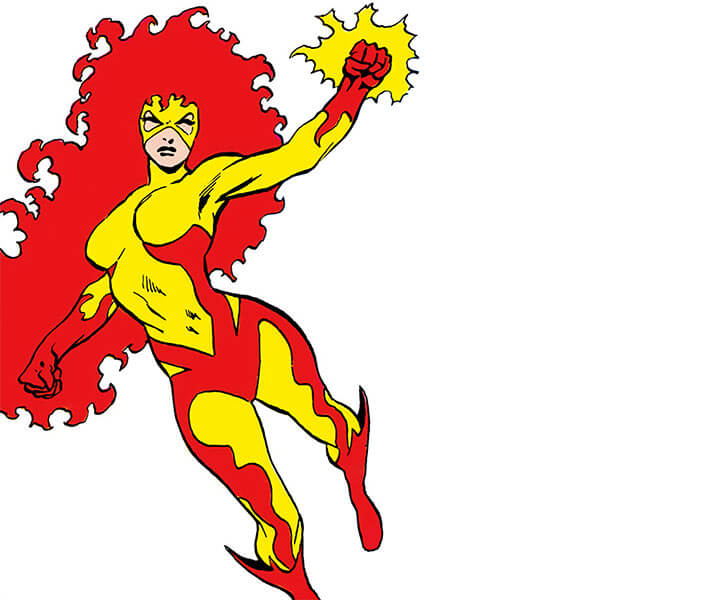 See the team entry for much of the history.

And see Coldsnap’s entry for the rest of the history, since they’re always together.

When she wore power inhibitors in prison her hair was shorter (about mid-back) and the shade of red wasn’t as bright.

Perhaps her hair serves as a radiator to shed excess body heat. Over the years, it looks more and more flamelike when she’s flying. 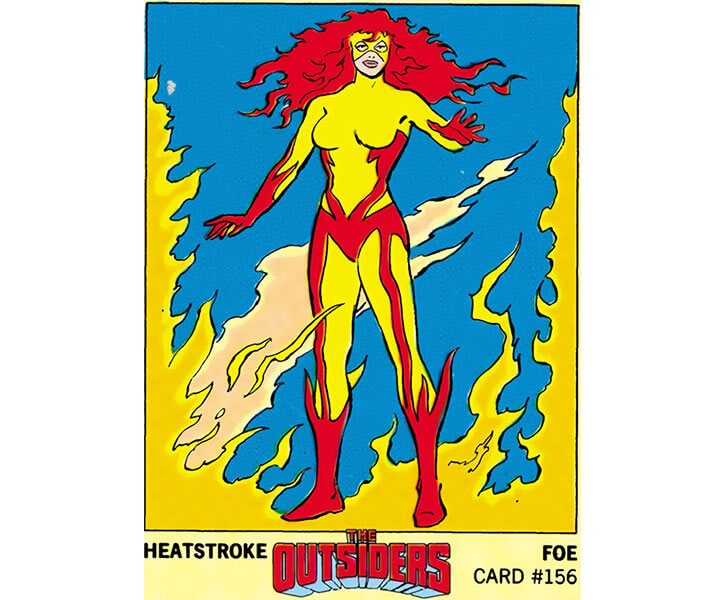 Originally, Heatstroke was a bit bimbo-ish. She wasn’t the deepest thinker you know (well, I hope) and acted somewhat girly. I suspect that she was still in her teens.

Over time she became more pragmatic, focused and experienced

Like Coldsnap, she often goes for disarming shots. But she has no problem with killing people. In fact, she seems more bloodthirsty than her partner.

During the 1980s, the Masters of Disasters had a thing going where they all did bad puns about their respective “element”. Heatstroke wasn’t really into it, though.

Joanne and Darrel deeply care about each other. All they want is to be together, and that they can’t touch is the biggest problem with their lives.

Wanting to protect each other may result in accidental contact. Such as reflexively catching the other when they’re knocked back by an attack.

All Powers are Contingent Upon Flame Project.

Here again I tried to inherit the Mayfair stats, but had to tone scores down to reflect the material. Heatstroke and Coldsnap don’t achieve that much, and usually go down in one or two attacks.

They both tend to focus their Hero Points on offence, though this is less true for Heatstroke.

They occasionally Team Attack, which isn’t common among this type of villain.

One panel can be interpreted as Heatstroke using thermal vision. But you have to be pretty determined to reach that conclusion.

In one 2010 panel, it looks like she might have one or two APs of Flame Being on.

We see very little of the couple in this state – not that I’m complaining. DEX 04 STR 05 BODY 05 are possible Physical Attributes.

When seen they were buying a rifle approximating their normal powers. [BODY 02, AV 05, Ice Production (cold attacks only): 06, Flame Project: 07, Range: 04, Ammo: 10, Limitation: Neither Power has Range, use the listed Range instead] are possible stats.