This is a first draft, without additional research, to establish new style stats for some common weapons needed in character profiles.

And as a reminder it’s meant to model weapons *in fiction*. And whilst keeping things simple at that.

Special purpose, heavy melee weapons will be covered in another article.

Essentially a bigger, heavier spear with multiple heads – or a more specialised head. Gary Gygax  liked these, so they’re important.

A halberd would be a typical example. In part because halberds stuck around as ceremonial weapons.

In most stories, polearms are used by ordinary guards and soldiers. They are seen as requiring less training and tend to be used in formation fighting. So they lack that image of rugged, manly, noble individualism. But in actuality, it’s a pretty dynamic weapon !

DCH (WORG) Polearm [BODY 04, Enhance (EV): 03 (cap is 06), Descriptor: Usually piercing and slashing, but quite varies depending upon the head(s)].

The Enhance numbers mean that the weapon is beneficial to those with with a common EV (02 or 03) for the weapon to boost. Characters with a more heroic EV (say, from high STR) will not find polearm as good a proposition. To help model the typical polearm user in fiction.

Polearms with a hook

Some designs (such as guisarmes) include a metallic hook, often in the back.

It seems possible that these were used to bring down an armoured horseman. Though one assumes that this is only practical if you can do it from behind (because, say, the horseman is surrounded) and have a plan (say, ransom).

In DCH, this can be done as Stretching: 00 with the No Fine Manipulation Limitation. This lowers the Base Cost to 5, since with 0 APs there’s no Factor Cost to affect. Then add Enhance (EV): 01 (cap is 08). The EV in question is only usable in specific kinds of Wrestling Combat Manoeuvres – where one yanks people toward them, or sweeps them prone.

The Stretching bit will also feature in many polearms’ stats using Skilled Use, even if they don’t have a dedicated hook. By using the bottom crescent of an ax-like blade.

Closeup on a typical guisarme head with the hook, the spear tip and a spike.

It requires two hands to be wielded, though it is possible to strike some blows one-handed (primarily when on horseback). The “Bastard sword” or “hand-a-half sword” terms are thus sometimes used, though they don’t work well with the way we’re drawing sets here.

(Likewise, in early decades, the word “longsword” was used in RPGs for what we now call a broadsword. World of confusion, indeed.)

The most well-known design may be the Japanese katana, but there are various European swords that are roughly the same, if straight-bladed. The Scottish claymore may be the best-known example.

Such swords are used within full-featured fencing systems. These are preoccupied about ways to control space between fighters, ways to parry attacks, feints, the strengths and weaknesses of different stances, ways to batter aside the enemy’s blade and how to follow through, etc.

These swords are fast enough to manoeuvre, and the historical manuals include plenty of dirty tricks to leverage opportunity. Disarming, pommel bashes to the face, low kicks, arm locks, half-swording to ram the blade into the guts like a short spear, etc..

But these techniques are chiefly useful in a judicial duel context, without body armour.

Having a big pommel to be able to do Bludgeoning damage as well is common enough in European swords, but less so in Asian ones.

Archetypal XVIth century Scottish claymore longsword. The word “claymore” historically was applied to many kind of swords in Scotland (most of them one-handed) across the centuries, and this longsword design probably wasn’t that commonly used. But for fictional purposes it matters little.

In the stats below the durability gets inflated, as well as the blade’s ability to slice through hard materials. And if such an exaggerated, badass blade is forged by a top-tier legendary swordsmith, it could have BODY 09+ !

You could also use these stats for a fantasy longsword forged out of “star iron” (a meteoritic ferrous compound). Or something equally impressive but not out-and-out magical.

People who get to use a badass katana will usually have Martial Artist APs, bolstering their Initiative and their armed EV. Note that the Sharpness is thoroughly cinematic. A realistic katana doesn’t perform well against hard surfaces.

People who get to use a badass katana will usually have a bunch of combat-centric Advantages. These might be packaged as an Easily Removable (Requires a katana) Power if they are specialists in kenjutsu, iaijutsu and the like.

This type is even longer and weighs about seven pounds (3.5 Kg).

In the real world, the primary examples are specialised Renaissance swords, such as the German zweihander or the French espadon. These normally were used by strong specialists with a specific job.

Usually, said job was to engage pike-wielding formations, by attacking the wooden poles. As can be imagined this is high-risk work, and with the sword being so long and so heavy one a/ has to know what they’re doing and b/ won’t be able to do it for long.

Other jobs may have included breaching duty during sieges.

These swords often have several guards, with the biggest one being large and thick. These can efficiently parry strong blows.

In a fantasy environment, a weapon such as an espadon could have more of a role due to the presence of giant creatures. Such as trolls, or something. An exceptionally long and heavy blade wouldn’t be overkill.

Perhaps there would be tactics mixing an expert with a giant sword with polearm-wielding soldiers. The giant sword would be wielded more like a spear until the other fighters can create an opening, wolf pack-like.

Most examples of giant swords may actually be ceremonial, status-marking, or intended as a religious offering. They’re not practical weapons. Though of course with heroic, peak human or superhuman fighters…

Likewise, some animé and animé-inspired genres (say, Bleach) feature absurdly large swords in semi-common use. As always, it is important to go with evidence-based statting. Do these actually, consistently do more damage than being hit with a katana or claymore do — assuming similar levels of strength and skill ?

Many sorts of obstacles will also be eligible for the +1 bonus, if they are something an axe would be good at hacking. That includes non-metallic doors, or most modern interior walls.

Dane-style two handed axe with a larger and more decorated head than usual. A realistic model would have a head about ⅔this size. The decorative engraving is based on a real one, though.

Such weapons tend to be used against well-armoured fighters.

Mind, Bludgeoning impacts work well against humanoids. These are gracile compared to many quadrupeds, and thus easier to break. But through the wonderful magic of blood loss, cutting and stabbing works even better.

A long and stout stick, possibly with ends lightly shod in metal.

Length varies significantly, but “about as tall as the wielder” isn’t uncommon.

Beyond being cheap to make, a staff like this is also useful in hiking, to carry buckets or bundles, to check for traps, to help aged people get around, etc.

It is also a versatile weapon with two business ends, an excellent reach, good parrying power, a wealth of techniques, etc.. Yet in the end, you’re just hitting people with a bit of wood. Still, in less lethal stories that could be enough.

As always, the more impressive fight choreography bits are chiefly a result of the wielder, not the weapon. A Character with, say, superior APs of the Evasion Skill contingent upon wielding a staff will be able to deflect attacks in an impressive manner. Joe Sixpack won’t, even with a really nice staff.

Various kinds of hardwood and shodding will increase BODY. Which becomes important when you’re Blocking blades or facing weapon-cleaving attacks. 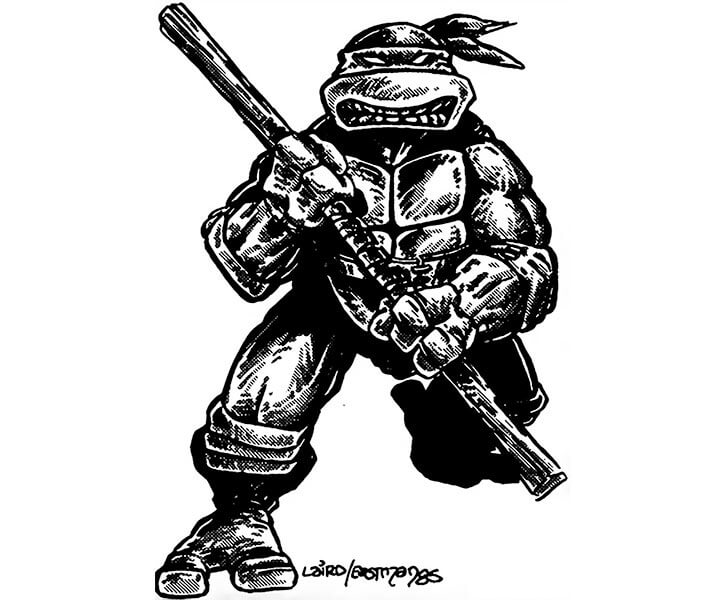 Donatello of the Teenage Mutant Ninja Turtles, with a turtle-appropriate staff.

A wooden two-handed club, chiefly used in the Colonial version of rounders. A typical bat is 42″ (1 metre) long, made of ash or maple, and weighs about one kilo (two pounds).

Though they are intended for precise ball-striking techniques, such bats also make good, well-balanced clubs. And since they are so common in US households, they likely are the most common two-handed melee weapons in Anglophone fiction set in modern settings.

Outside of baseball-loving countries (mostly the US, Japan, Cuba and Taiwan), baseball bats tend to be bought for street fighting.

It is included among the “heavy” weapons since it’s normally used two-handed. They can be used one-handed, but in this case they are stats-wise indistinguishable from truncheons. Unless you’re Kevin Matchstick.

Bats made of hickory or aluminium may have a BODY of 03, and conceivably a higher Enhance cap. Characters who use bats, such as Casey Jones, the Sportsmaster, modern versions of Harley Quinn… may have bats with a BODY of 04 or so even if they’re supposed to be ordinary ones from the shop. 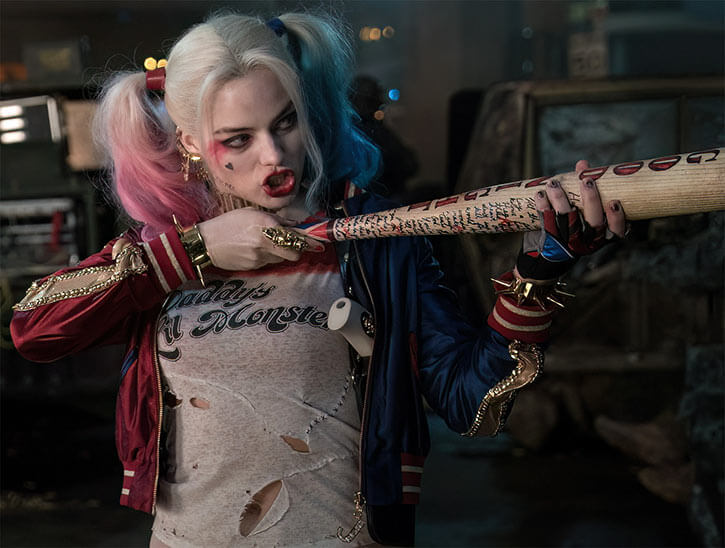 It was primarily used in formation fighting. From Ancient Greek phalanges to the pike-and-shot formations of the XVIth century.

A rank of pikemen pointing their weapon at you is… difficult to approach. And the pikemen on the second rank will also be able to attack, since pikes are so long.

This also works in single combat, with proper technique. One the other hand, if an opponent with a shorter weapon gets past your spike’s head… There are techniques with the haft and butt, but the weapon could easily weigh 9 or 10 pounds (4.2 Kg). So, transitioning to a side arm instead would be sensible.

Within less than 10 minutes, this robust documentary based on period fighting manuals shows how pikes were used.

And here are historical techniques to get past a pike’s head. Of course, the *issue* is usually that pikes are used in formation, with the pikemen supporting each other and constantly shifting between two or more of the stances from the previous video.

Naginata and other light glaives

A sword at the end of a stick.

There are various designs from various cultures – the naginata being a family of Japanese designs. But to fall in this category they must have a fairly slim and long blade — slimmer and longer than a polearm — giving them a superior balance.

Such light, long glaives can thus be wielded with combinations of staff, spear and sword techniques.

A claw-like spike on a haft, probably with a hammer-like head in the back. This does one job, which is to pierce armour. The front end is normally smaller than the sort of picks one uses to break up soil to dig.

Some cultures use a more ornate variation. Say, with the business end is sculpted to look like a metallic fist holding a dagger.

One issue of picks is that they get stuck into what they struck. On the other hand, that seldom happens in stories.

On the gripping hand, it may be because one so seldom sees picks in stories. Guess I should have kept them out of the “common” weapons article… Oh, well.

Source of Character: Stories with heavy melee weapons in ’em.