The Hebrew Hammer was a 2003 comedy movie. While I thought it was terrific, it received mixed reviews and commercially bombed. So I’m willing to call it a cult classic. Partially as a pun, and partially because it was never going to be a mainstream success anyway.

There are S P O I L E R S in here. And it would be a shame to ruin a perfectly good comedy, nu.

The Hammer is a street-level adventurer and gunman, and a hero to the community. He’s a charismatic fellow of many idiosyncrasies.

Under the direst circumstances, the Hebrew Hammer can unleash the ultimate weapon of Judaism. Namely interminable, fast-paced kvetching  and self-deprecating humour that just goes on and on…and on…and on and on until you just want to die to make it stop.

Mordechai Jefferson Carver grew up as a lonely Jewish boy. His was a harsh Gentile world with dark and stormy nights, towering Gothic cathedrals, antisemitic teachers, Jew-bashing local businesses and mocking Christian children. Said children were particularly cruel during the Hanukah, as they compared the opulence of their innumerable Christmas gifts with Mordechai’s modest Hanukah present.

Forged in the mockery and fire of a world that hated and feared him, Mordechai grew up to become a Jewish Orthodox super cool-cat. He was a tough and highly charismatic street hero for the New York City Jewish Community.

The Hebrew Hammer became an important figure in the New York City Jewish community and its allies. In particular he helped negotiate an agreement with Santa Klaus where “happy Christmas” would be replaced by “happy holidays”. All so his Jewish and Black Pagan brothers could feel more comfortable at the end of the year.

He was part of the Jewish Justice League, along with such luminaries as the Head of the Anti-Denigration League, the Chairman of the Worldwide Jewish Media Conspiracy, the Sage Elderly Jewish Leader and the permanently empty seat of the Coalition of Jewish Athletes. Yet he became the only Jew to ever be thrown out of the JJL after an incident with the Hare Krishna at the airport.

In 2003, the nice Santa was assassinated by his degenerate son, Damian Klaus. Klaus wanted to make it very clear that non-Christians were *not* welcome during Christmas Time.

The director of the Jewish Justice League, Chief Bloomenbergensteinenthal, soon learned about this and decided to act. However, since the Hebrew Hammer had left, the JJL only had people like lawyers, movie directors, lawyers, politicians, bankers, academics, doctors, lawyers, bankers and rabbis in their ranks. Which wasn’t what was needed.

The feisty Esther, the daughter of the chief, decided that she would bring the Hammer back to the JJL to take charge of that mission. She struck a deal with Carver’s mother, who was concerned that he was still unmarried at 30. Esther would give the Hammer sexual favours and possibly make him an honest, married man if Mrs. Carver could convince her son to take the JJL mission.

After a few minutes of *yet again* hearing his mother lament about not being able to show other Jewish mothers photos of her son because he was a nogoodnik while all the other sons were lawyers and doctors and investment bankers and lawyers and rabbis and bankers, the Hammer took the mission to prove his mother wrong.

After conferring with the JJL, the Hammer went to contact his main man Mohammed Ali Paula Abdul Rahim from the Kwanzaa Liberation Front (a Black Power movement) for info. As it happened, the racist Damian Klaus had just fired an elf for being Black. And the disgruntled worker had joined the KLF.

After the elf shared his info and attitude, he produced the usual clue : a book of matches from a seedy bar. It was a trap, though, for the Duke’s was a skinhead bar. But the Hebrew Hammer walked out triumphant, shotguns a-blazin’. Damn treacherous double-agent elves, it’s a real problem these days.

Soon poor, innocent Jewish children were denying their faith and ancestry. They were wantonly erecting and decorating Christmas trees in the streets and in their homes – and even singing Christmas carols !1!

Hebrew Hammer to the rescue

When the Hebrew Hammer realised this, he immediately unlocked his secret stash of bootleg copies of Fiddler on the Roof , Yentl  and Chaim Potok’s The Chosen  and other holiday movies depicting Jewish characters in a positive light, such as… such as… hmmm. Okay, so he had those three movies, right ?

He then had the Worldwide Jewish Media Conspiracy produce further copies to flood Jewish neighborhoods with those and help the children beat the addiction. Es gait !

The Hebrew Hammer and Esther then infiltrated a K-Mart where Damian Klaus was making an appearance. They were trying to do so undercover and disguised as Gentiles – complete with “I love Jesus” pins, terrible fake blond hair, Jesus fish baseball caps, American flags and exaggerated lack of accent.

While the Hebrew Hammer was horribly unconvincing as a Christian, Esther came to the rescue with enough smouldering sensuality to make it past Klaus’s distracted thugs.

However, as they tried to exfiltrate the captured Klaus from the K-Mart, the dastardly villain told the assembled children how Jews like the Hammer and Esther wanted to cancel Christmas and would sacrifice nice Christian kids in weird and sadistic rituals. Our heroes had to drop Klaus and flee before a horde of furious children, but were saved by the Underground Jewish Railroad. Pshew.

While Esther and the Hammer were busy making love then spatting after Hammer discovered Esther had struck a deal with his mother, Santa Klaus hatched a plan.

He would steal the judaeium from the Jewish Atomic Clock regulating the Jewish calendar in Israel. Without that rare element, it would become impossible to keep track of the incomprehensible Jewish calendar. Hanukah would cease to exist ! The Hammer rushed to Israel, and the Chef had his daughter secretly follow him.

Back to the JJL, the Chief entrusted the Hebrew Hammer and Mohammed Ali Paula Abdul Rahim with freeing Esther from the North Pole – even if the Hammer had to use the… ultimate weapon of Judaism !

The two adventurers overcame the SQAT (Klaus’ heavily armed but small-statured elves). However, Damian Klaus surprised the Hammer and kicked his gun away. At the mercy of the armed madman, the Hammer had no choice but to unleash… the ultimate weapon of Judaism !

Soon, Klaus found himself battered into near-unconsciousness by Carver’s rapid, nonstop, Yiddish-ladden rambling about how everything was his fault and how terrible his guilt was and how awful the situation was and how everything was so terribly screwed up anyway and a shandeh and a charpeh and how completely worthless the Hammer was anyway (a groisse gornisht, really) and how he should forget about Esther anyway since she’d never fall for a schlemiel and a nishtikeit like him anyway and his mother was really right all along oh yes and…

Mohammed Ali Paula Abdul Rahim took the shattered Klaus away, and Mordecai married Esther. However, despite great fame of the Hebrew Hammer, his mother soon resumed kvetching how it was not important anyway, since Hanukah was not even a major holiday.

Now, saving Yom Kippur or Pesah would have been more important, of course, but saving Hanukah was not like the son of the neighbour who was an investment banker and had just organised a very important and very prestigious merger, nu.

The Hebrew Hammer is a super-cool neighbourhood hero and blaxploitation-style manly private detective. He has a cool cat 1970s attitude and something of a lone, straight-shooting sheriff on the Frontier attitude.

From time to time he will burst into a comedic monologue evidencing such traditional New York Jew pastimes as whining, kvetching, arguing with his mother or telling people he’s just human and how hard all of this pressure on him is (i.e., whining). Such outbursts are delivered very expressively and while speaking at an astounding speed.

(When proposed marriage) “Thank for the offer, but Jee-Haich-Vee is the only one for me.”

Mohammed: “’cause there’s a lot of brothers… and sisters and babies counting on you, dig ? If you fail…”
The Hammer: “Holdonholdonholdon… Mohammed,I,look,hem,ah, I’mgonnaworkreallyreallyhardonthisone, but, ifyoucanjusttakeiteasywiththepressure, ’cause, I’malreadykindatensealreadyasitis…”

(After two blonde and buxom members of Klaus’ entourage try to seduce Mordechai ; in a cool, virile action hero delivery) “Sorry no dice, Santa – I like my women like I like my bread — unleavened.”

Ken ! He would be an associate of the JLA, sharing some special adventures with Superman since he’s one of the few men who knows that Superman is secretely a Space Jew.

Drawbacks:
SIA toward defending Jewish faith and folklore, Attack Vulnerability (-1 CS OV/RV against Persuasion attempts by his mother), Loss Vulnerability (All Attributes, Powers and Skill drop to 0 during shabbat), MIA toward picking up lost money.

Source of Character: 2003 movie ; the Hammer is played by Adam Goldberg.

Helper(s): IMFDB.org  for identifying the shotguns. 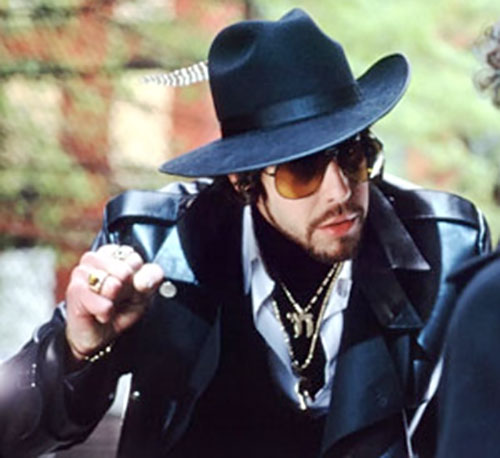 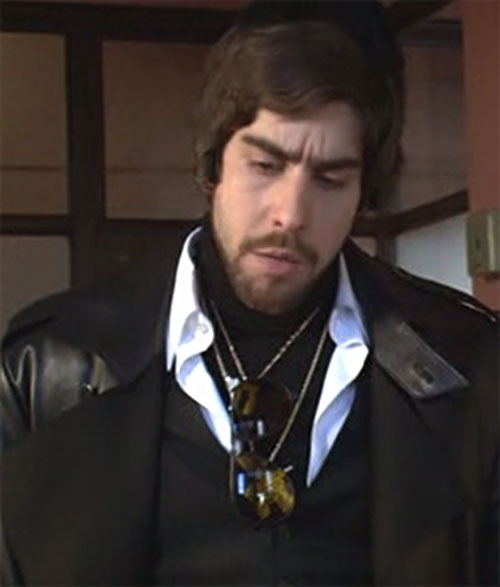 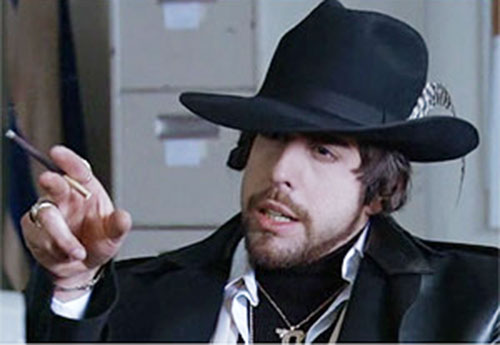 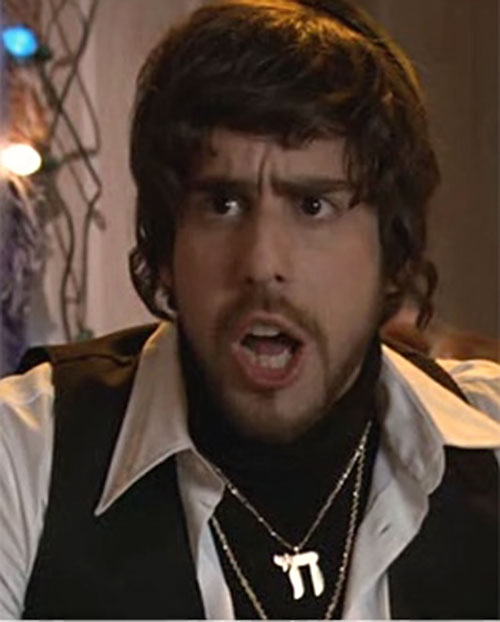