In 2011, it was revealed that yep, she had been the goddess all along… but that happened years after this profile was written.

Since this is solely based on the 1970s material, she’s a cypher. So most of the game stats are guesses.

First, the facts — Hecate’s main power, and preferred mode of combat, seems to probe the mind of her opponent. Based on this information, she’ll summon something interesting and powerful from her opponent’s memories to fight while she watches. She may or may not to maintain concentration for her summonings to keep existing.

To battle Ms. Marvel she summoned potent Kree war machines. First she invoked an empty but animated suit of Warhawk power armour . These are apparently designed to fight in deep space, frozen worlds and atmosphere-less planets – and capable of razing a city. Hecate then started to summon a Kree main battle tank, though this war machine was not actually seen in action.

To distract an Elemental, she briefly summoned something looking like the Living Mummy, selected because it would unnerve her opponent.

When the Elementals levitated an island to drop on her, she pulverised half a million tons of rock and coral with one power bolt. However, she stated she couldn’t do so again without massive damage to both herself and the world.

Hecate could withstand powerful blows from Ms. Marvel, and may have had some level of superhuman strength. She also seemed to have some sort of mesmerisation/charisma spell or ability.

She claimed that she had power over all elements, and could levitate. At one point seem to start some sort of entangling spell or energy release. Since she could speak English, she likely has a way to speak any needed language.

Her powers seem of a mystical nature. Yet, she has referred to her “science” and her “instruments” in ways that are atypical of magicians. This may have been to imply that she practices an unique, alien discipline that we’d consider to be akin to both science and magic.

My vague impression is that Hecate may have been an atypical Eternal who developed unique disciplines for her cosmic energies. In this respect she would be like the Interloper, Sersi, Makkari or the Forgotten One. If that is the case she specialises in powerful illusions of opponents (so potent that they are basically real) and the occasional cosmic energy blast.

She claimed that she was a “woman much like [Ms. Marvel]”. This may be a weird way to simply refer to a shared gender. But it may also mean that Hecate was an enhanced human spliced with something else – a description that reasonably suits an Eternal.

Next to nothing is known about Hecate. She indicated that she was an explorer. She also said that during a previous stay on Earth in past millennia she had been confused with a goddess (implicitly Hecate). She seems generally benign, and concerned with exploration, discovery and preventing major dangers to sentient life.

Apparently, she has a particular attachment to Earth.

In late 1977, Hecate decided to come back to Earth-616 . On her way she rescued the Elementals, who had been exiled from Earth and cast into the “dimensional aleph”. Her goal was to secure the scarlet Scarab, an artefact of great power. She did not want it to fall into the wrong hands. 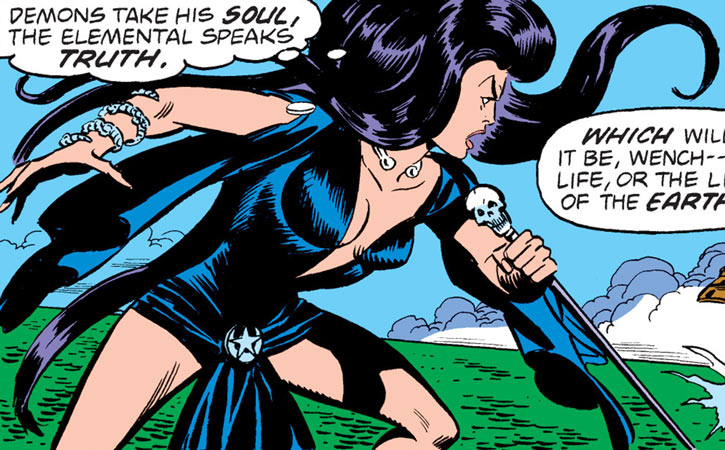 The wily Elementals pretended that they wanted to help her. But of course their goal was to take the Scarab for themselves. After they found the Scarab, three of the Elementals turned against her, and they fought on the Saracen Kay.

Sensing a major danger for Earth, Ms. Marvel intervened in the fight. Initially, Hecate repulsed her with recreations of Kree war machines. Eventually, she realised that the Elementals had betrayed her and wanted to kill her. So Hecate allied with Ms. Marvel instead. Together, they prevailed against their three opponents.

Though Ms. Marvel had saved the Earth, her Carol Danvers side was furious. The fight had inevitably resulted in the apparent destruction of a space shuttle with her friend Salia Petrie aboard it. Forcing the change from Ms. Marvel to Carol Danvers, she blindly lashed out at Hecate with superhuman strength.

Pointing out that she shouldn’t be able to do that as Carol, Hecate used some sort of influence power to soothe her. Hecate then had Danvers more fully integrate her Ms. Marvel and her Carol Danvers sides. This greatly alleviated the tension within the shared psyche.

She vanished after that little deus ex machina.

A sort of regal scientist/explorer/protector/mystic, responsible but easily annoyed. She seemed quite trusting, even downright naïve. For instance, she had trouble with the notion that people she had just saved could possibly turn against her.

She seemed to consider that women formed a sort of universal sisterhood, and to preferentially trust and appreciate ladies.

“I am the dark angel of legend, little one. Mistress of the moon and patroness of those who walk the right-hand path. I am the triune goddess, little human sister… I am Hecate !”

“You’ve fought with skill and courage, sister. I respect that. But you will not win. As I pulled the image of the Warhawk from your memories and made it real, so shall I pull a second image. Behold !”

“You speak of power, Hellfire ! Elementals, you do not know the meaning of that word !” (BA-DOOM !)

“I am Hecate. An explorer, a seeker after truth, a woman – much like yourself – though when I visited Earth long ago, your people thought me a goddess.”

Equipment:
I’d assume that Hecate’s staff was just a staff.