The names “Heebie”, “shadow lion”, and “Buddy” were created by fans — no names for those characters were given in the games. The enemy Heebies are referred to as Reds herein to reflect their distinctive attire.

The Reds are trained in basic marksmanship, melee combat, and basic tactics involving their weaponry.

The Reds do have some land vehicles and riding animals, though they seem to prefer to travel on foot.

There are few details available regarding the Heebies, a humanoid race that lives on an unidentified planet unknown to present-day Earth. There are at least two factions, one of which is remarkably more aggressive than the other.

The more aggressive faction, the Reds is physically distinguishable by the red epaulets and belts they wear as well as their bright red eyes (the other Heebies have hazel eyes). The Reds made a practice of raiding Heebie villages and enslaving their inhabitants. The slaves would then be put to hard labor in the Reds’ prison mines or forced to compete in gladiatorial games in the adjacent arena.

While the other Heebies live in a technologically simple manner comparable to early human hunter-gatherer societies, the Reds lived in a city with a strange mixture of primitive architecture (some of which was clearly eroded) and high-tech electronics.

Whether this anachronistic mixture of decaying gothic architecture and advanced technology represents a cultural choice of the Reds or some sort of social decay is unknown. The Heebie Reds may even be servitors for a more advanced civilization entrusted with a few select high-tech artifacts in exchange for pressing the other Heebies into services or as rewards for other work.

When a human physicist named Lester Chaykin was transported to the Heebies’ world by an accident during a particle collider test, a pair of Reds on patrol spotted and captured him. Lester was placed in the prison labor camp.

He and one of the captive Heebies, nicknamed “Buddy,” orchestrated an escape, killing a fair number of the Reds as they worked their way out of the facility. (Another World)

They normally wear black boots and a black outfit that looks like a women’s black one-piece bathing suit with red epaulets and red belts. While on patrol outside the facility the Reds will wear hooded black robes over their usual attire.

The Reds are quite ruthless, answering any attempt at escape with extreme force. They will try to capture escapees if they can get close enough to grab them or get the drop on them, but will otherwise simply gun them down.

As they did in Out of This World, the Reds might well appear as a prison guards on another planet or even on a slave starship. The lack of a common language and their ruthless brutality can be played up to emphasize a hostile alien atmosphere.

Note:
The Heebies do not speak English. This should not be considered a Drawback, since they normally have no interaction with any English-speaking beings whatsoever.

Drawbacks:
None on their own world, though Heebies would be considered to have Distinct Appearance (large, slate-skinned humanoid) and possibly Altered Anatomy (Physical) if they appeared on Earth.

These unusual energy weapons were standard issue to the guards in the Reds’ prison. Their normal blast was a laser beam sufficient to burn a man or Heebie down to a charred skeleton in a single shot.

These pistols were capable of even more powerful blasts sufficient to cause a door equivalent to that of a bank vault to crumble into dust with a single shot, albeit the price of quickly depleting their ammo. The guns were also capable of forming stationary protective energy shields that blocked energy blasts but not physical objects.

Once a laser pistol runs out of ammo, it can only be reloaded by entering a Recharging Chamber. These chambers are found infrequently throughout the prison. Anyone with a gun who enters a Chamber will find themselves levitated and tingling with static electricity while the gun is reloaded by induction within a few seconds (one phase). 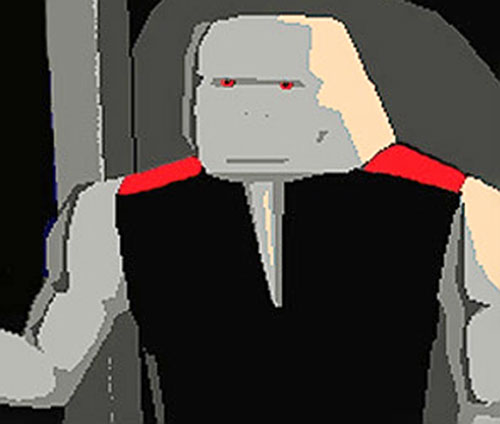 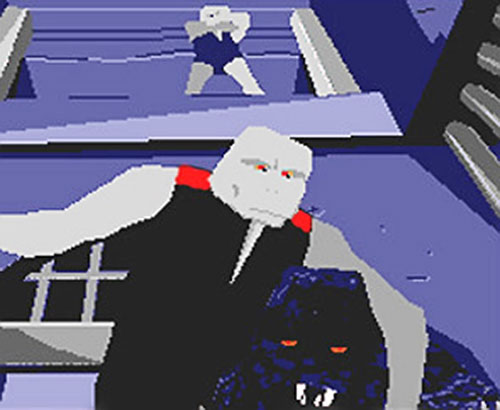 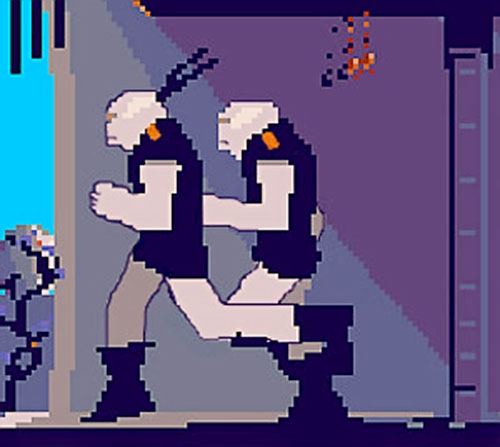 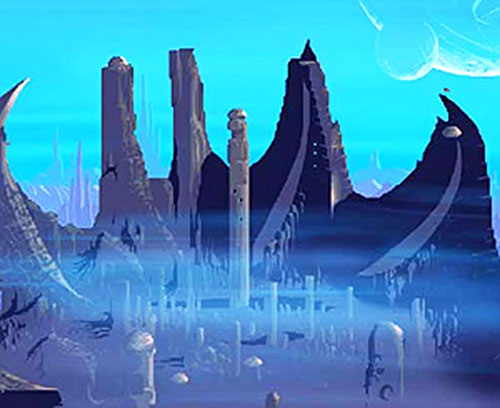