Riordan is a well-trained cop, an excellent athlete and a cinematic gunfighter.

Her shock tactics, brutal resolve and strange appearance give her a lot of momentum in a fight. Common criminals will find her very difficult to stop. She fights as a fanatic.

Her main weapon is a SPAS-12 shotgun, but she also carries a pair of H&K MP5Ks if she needs more staying power or range.

She often fights astride a sports bike, using it to charge in and shoot her SPAS one-handed once at ideal range. If she uses the H&Ks, she will dual-wield  them.

Katherine Riordan was from a Blüdhaven Irish-American family where almost every member is a cop.

Her early career as police was promising, with an impressive track record. Her exploits and her looks attracted the attention of the local press. Thus, the publicity-hungry Commissioner Holcomb set up a photo op with all her relatives on the force – three generations of Riordan police.

Angel Marin — back then a mere gang boss, though he would become the top dog of Blüdhaven — had explosives planted to get rid of the Riordans. That was because they represented a significant percentage of all honest cops in town. Kate’s father, brothers and uncles were all killed.

The death toll was two dozen Riordan family members in total, plus a number of journalists and other officers.

Kate Riordan narrowly survived, but was left horribly burned and disfigured. The blast had thrown her away in the river, leaving her a terribly wounded amnesiac. Thus, the police only found her several days later. She couldn’t be identified and was taken in as a Jane Doe.

Riordan spent months in surgery and therapy. Meanwhile the thoroughly corrupt Blüdhaven police covered things up, denying honours to the victims to keep everything quiet. 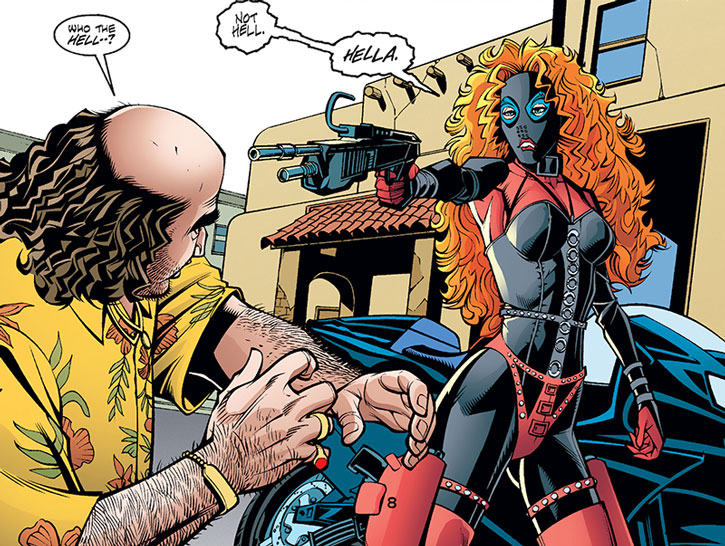 There are various urban legends about how she prepared. A vaguely credible one is that she raided a small biker gang to steal half a million in narcotics money, then went to Santa Prisca to receive experimental surgery to replace otherwise irreparable damage.

Though Nightwing (Dick Grayon) twice attempted to stop her, everyone on her list did die.

The Hella costume actually covers her entirely, except for the eye holes. Even the mouth is actually painted on.

Hella has a strange voice from the throat damage and her closed mask, but one can distinguish a Irish-American accent.

Rage-crazed, fanatical avenger relying on brutal interrogation and high-impact tactics – such as crashing in on a bike whilst firing a shotgun. Her hits are usually very loud and public.

There’s an urban legend that she swore that nobody would see her unmasked face and live, but that may be fantasy.

“You can never understand – he killed my family !” 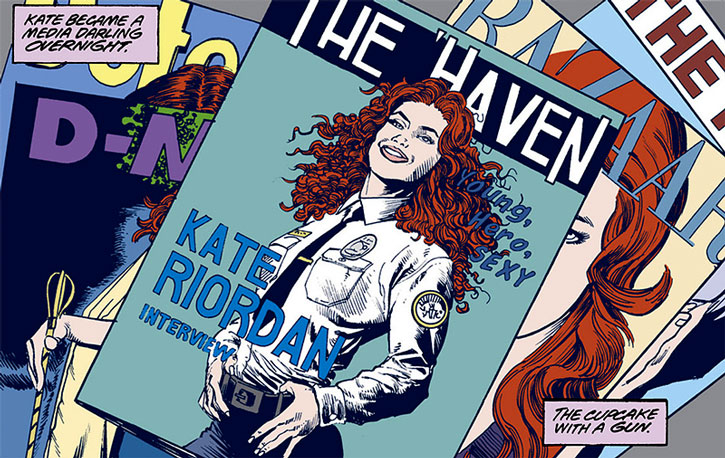 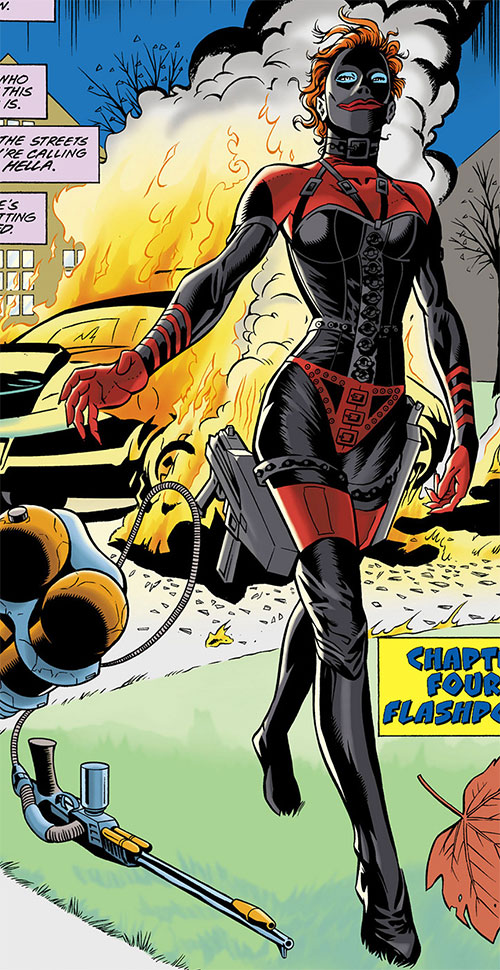 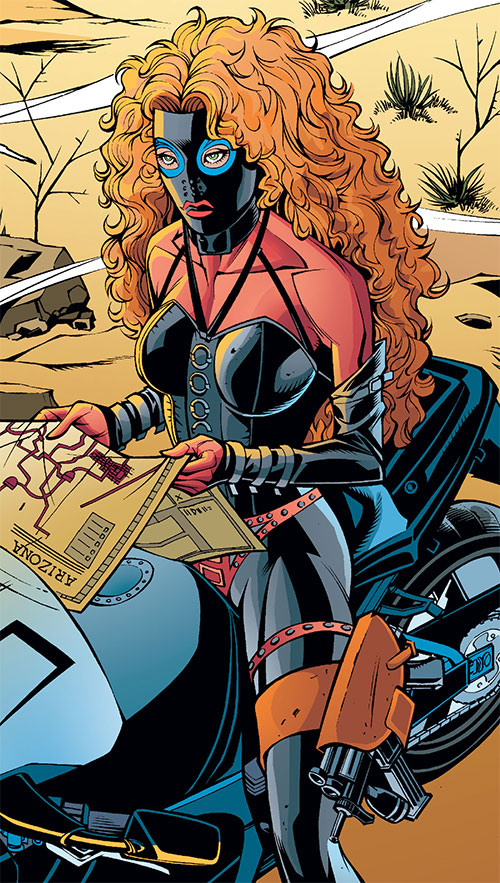 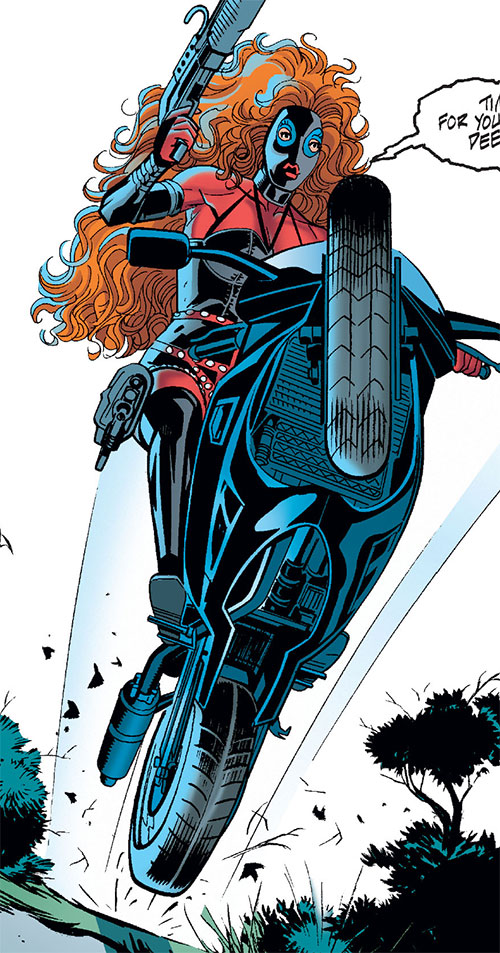 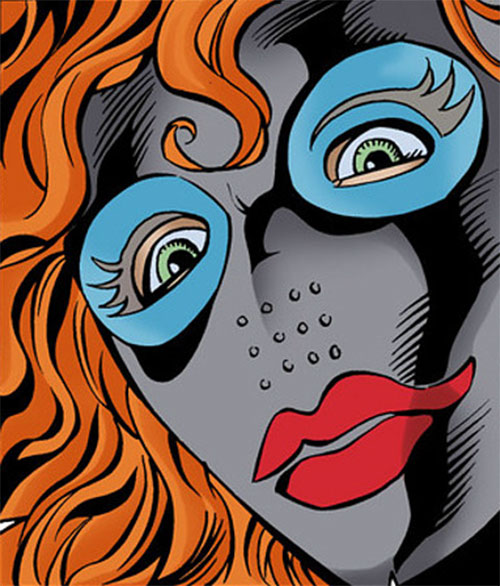