Hellhound is a minor character, about whom we see but a little during the Dark Ages storyline.

Hellhound possesses enhanced strength and is durable enough to be bullet-proof.

He is a good enough fighter to easily take on groups of thugs and emerge victorious. He can also manage low-level superhuman threats.

While an excellent ally, things can go south fast if he ever loses control over the possessing entity from whom he gains his abilities.

Hellhound’s paranormal source of enhancement stems from a demonic possession. That happened north of the Mekong Delta in Việt Nam. However, he was taught to control the demonic entity through some sort of trapping spell. His teacher was only known as the “old man”.

He uses this spell (Iron Will), to turn into his half-demonic superhero form, which he has complete control over. It looks like a mildly demonic, muscular male.

When he powers down to a completely normal human level (using Insta-Change) he loses access to 04 APs from all of his Physical Attributes, the Analytical Smell, Extra Limb and Claws powers and the Distinct Appearance drawback.

These all return whenever he chooses to reactivate the powered form.

However, when Hellhound loses control of whatever magical force is held in his body, he transforms into a giant out-of-control Kirin . As a Kirin, add Growth: 05 (Always On), Claws: 06, Strange Appearance and +2 APs to his STR and BODY attributes and to Extra Limb.

In a Kirin state he is almost treated like an NPC. Such out of control transformations can happen as part of a mystical crisis situation. These can actually be played out like Magic Catastrophe Subplots even if he doesn’t cast Rituals. Or they can happen as a Power Complication Subplot where the player has limited control over the character.

The Kirin is controlled by the GM as basically a raging monster. That lasts until something happens that will give the Player temporary control over the character. In theory, using Exorcism should have profound effects on the Hellhound. So would strengthening his force of will externally or recasting the trapping spell.

When the plot has been played out in full the Hellhound will usually be back in the driver’s seat. It appears as if he improved his control over the demon over time thus accessing more and more of his power, which also changed his appearance. In DC Heroes RPG terms the Hellhound started out with 30 Hero Points  and ended up with 45 HPs in the middle 1980s.

The Hellhound is a Việt Nam veteran transformed by black magic into a demonic superhuman. The possession happened when his entire Marine patrol was captured by North Vietnamese forces.

Little is known about what then transpired. But he did learn to control the possession to such a degree that he could change into a half-demonic human by will alone.

Back home during the 1970s, he called himself the Hellhound. Hellhound fought hooligans and other criminal elements in the dark alleys of Astro City. He also fought the giant out-of-control Blue Knight alongside Simon Magus and other heroes.

He was also part of the legion of heroes later fighting the invasion of Astro City by Madame Majestrix and her alien legion.

He mostly fought minor superpowered threats, sometimes solo, sometimes teamed up. He was once severely beaten by Jitterjack as he teamed up with Jack-in-the-box to fight shadowmen during the Platypus Joe’s rise to mob power.

Hellhound lost control over the demon inside him when Jitterjack lethally wounded the Black Velvet. This resulted in her unleashing feelings of rage and hatred upon the city’s population. Hellhound got better soon thereafter as that problem was eliminated by the time-traveling Silver Agent.

In 1982 he was part of an heroic effort to stop Hellsignor, and was defeated. However his fellow Omega Ranger, the Point Man, ruthlessly saved the day. This is the event that also spawned the heroine Cleopatra II.

Later on Kerresh the Devastator, a threat on a cosmic scale, invaded Astro City. The Hellhound joined the defense late alongside the Omega Rangers. He accidentally mistook Charles (of the “Vengeance Brothers”) for a Pyramid soldier and readily cut him down. This delayed the brothers’ vengeance.

The planetary threat ended when the Rangers’ Point Man, not knowing its full power, used the Innocent Gun on Kerresh. This also created a crack in reality that would later cause much problems for the city.

In 1984, the Hellhound, while solo, joined the hero Mirage in Las Vegas against hordes of homeless people. These had been turned into identical, superpowered Dynamoids by Dr. Ganss. The combined efforts of the pair, the time-traveling Silver Agent, and the “Vengeance Brothers” (who were hunting for their nemesis, who now worked with Dr. Ganss), stopped the threat. 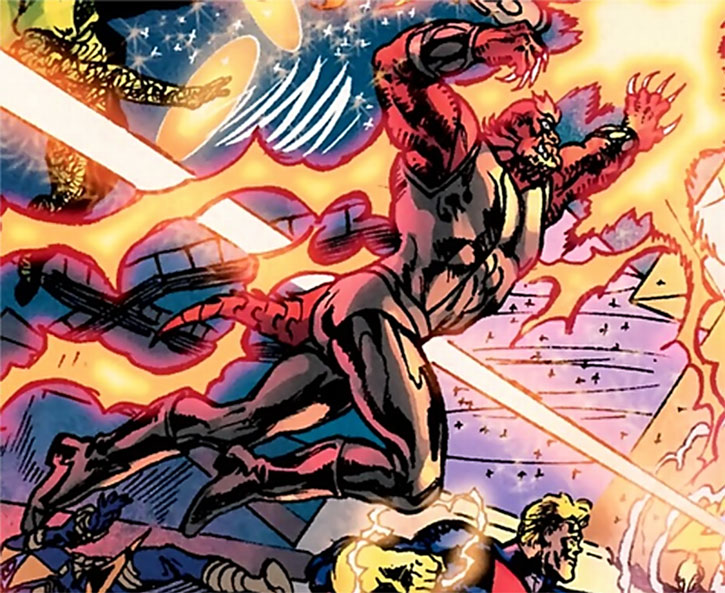 In the aftermath, the Hellhound had a short but memorable meeting with the legendary Silver Agent. Everybody knew that the Agent had been executed years ago, yet he was travelling through time.

In time, the Hellhound became a regular member of the Omega Rangers, a 1980s group put together by Bravo, El Hombre’s original sidekick. All in all, the Rangers were Bravo, Butterfly, Cleopatra II, Hellhound, Krakaboom, Point Man, Quarrel and Witchling.

Hellhound was active for over a decade. His heroic actions made some impact on the citizens of Astro City. While he was active from the early 1970s to the middle 1980s (then seemingly working solo again) nothing is known of his later whereabouts and activities. Thus, it’s possible that he was permanently cured of the demonic possession.

Hellhound is a bald Black male with a demonic jaw, white eyes (hence the name Hell-hound), a spiked collar, black armbands, and black leather trousers, boots and a vest.

His full Kirin form looks like a giant caricature or statuesque Chinese demon, complete with fangs, claws and a demonic outlook.

Over the years, his half-demonic look became more and more demonic. For example, a tail was added, his face turned into more Kirin-like and so on. He ended up looking quite a lot like the DC Universe’s Doomsday actually.

Chester Harvard Amos’ heart was is in the right place as he felt the need to combat the forces of evil using the abilities granted him by his demonic possession.

Indeed, the heroic community knows that despite his demonic looks the Hellhound is a caring, strong man willing to fight for the common men of Astro City. He is usually greeted by other heroes as a welcome addition to the fight.

He appears to be an excellent team player and fought well alongside some of Astro City’s more colorful vigilantes, such as the Jack-in-the-box, as well as the rogue elements of the Omega Rangers, who often used very hard tactics for being a superhero team. The harsh, rogue tactics, and even killing deserving threats did not seem to bother Hellhound too much.

The Hellhound also works well and effectively in the back alleys of Astro City fighting street-level crime.

(Hearing a speech by the Silver Agent) “Man. That is hardcore.” 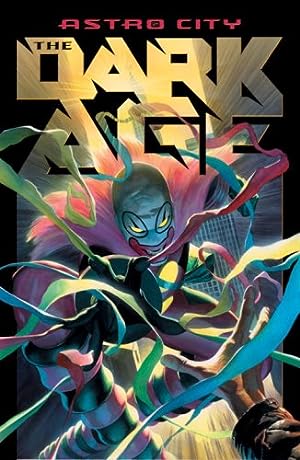 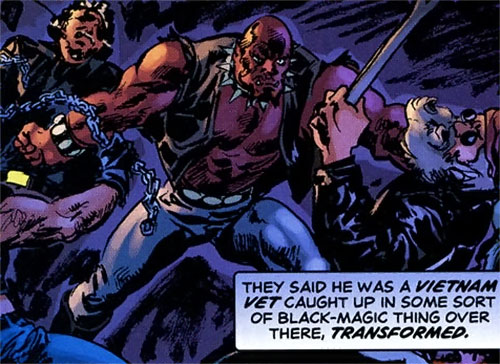 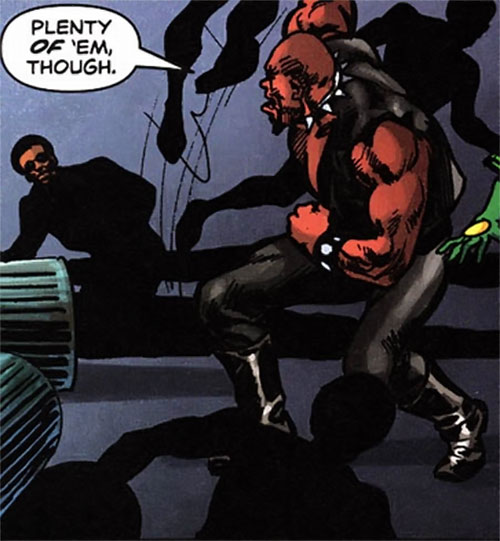 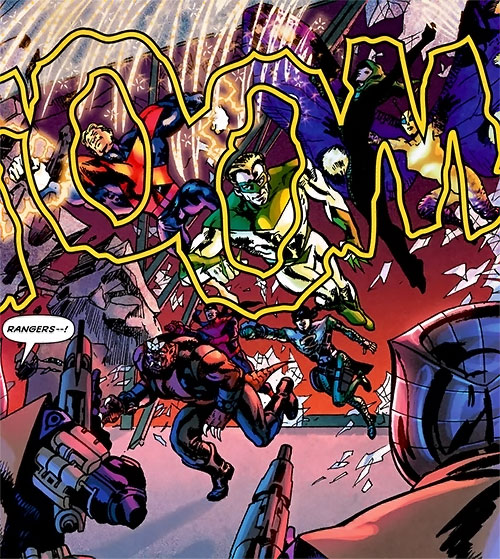 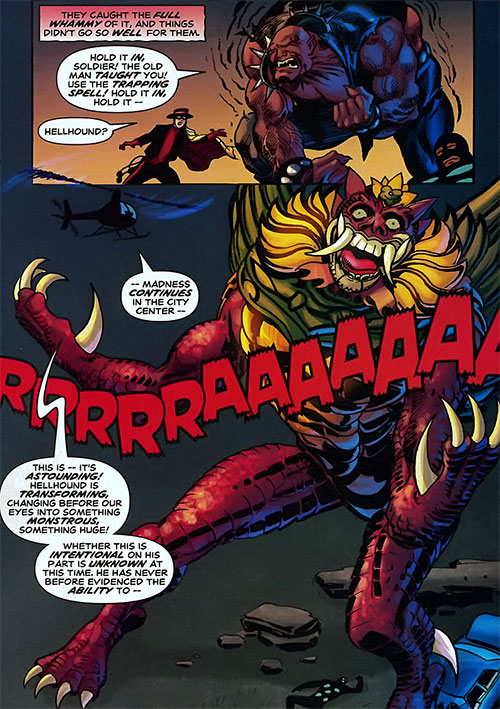