Hellhound was the top student of the Armless Master for a long time. He’s thus accomplished in the Master’s unique style, said to incorporate all martial arts into a coherent whole. He’s not very good at improvising, though, preferring to rely on tried-and-true techniques and katas.

On one hand, he has an enormous répertoire of those. On the other, it *does* cripples his efficiency in an actual fight – and leads him to overestimate his prowess. Hellhound thinks that he’s world-class – and while he’s very good, he’s not actually on that tier.

Hellhound is also a competent thief, martial arts instructor, dog handler and may have a number of other miscellaneous skills (tracking comes to mind).

Hellhound tends to be overconfident in a fight against perceived lesser opponents. That goes triple if said opponents are women. In game terms, he’ll not spend Hero Points  out of pride.

Kai was the lead student in the dojo the Armless Master used to run in Gotham. Aside from extensive study of the Master’s teachings, he was a thief (along with a small group of students at the dojo) and a sort of cultist.

Kai had some odd beliefs. In particular, he was looking to perform a ritual where he would die and be reincarnated as a hellhound. A key component for this was a priceless amulet worn by a statue of Bast  in a Gotham City museum.

However, a young Selina Kyle stole the amulet moments before Kai could, which apparently ruined its mystical “charge”. After beating her up, Kai left, but Kyle shadowed him back to the dojo. To Kai’s dismay and despite his objections, the Master immediately made the young woman a student.

Kai, the most senior and accomplished student, thus had for a year to cohabit with a woman he hated. Worse, during that time, Selina progressed at an unbelievable pace in her study of the Armless Master’s knowledge.

The lass eventually surpassed Kai as the most accomplished student in the dojo, and as the Master’s right-hand person. She also developed the identity of Catwoman. 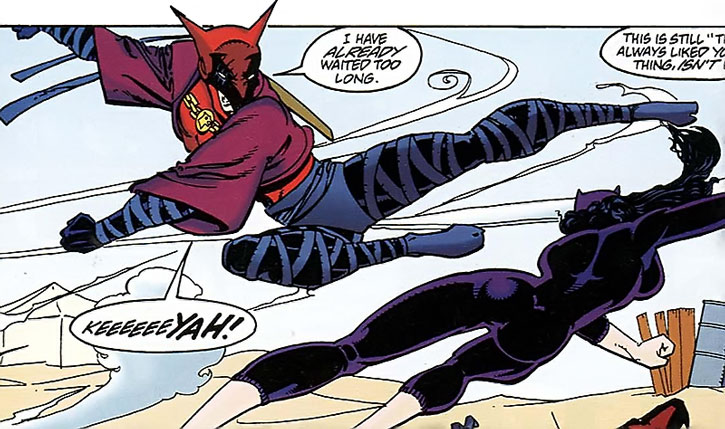 374 days later, Kai found a new way to die and be reincarnated as a hellhound – though one suspects that his sick mind just made it up.

To match Catwoman, he designed a symbolic animal costume and called himself Hellhound. Hellhound engaged Catwoman in combat so she’d be forced to kill him. In his mind, the male/female and hound/cat dualities would make his reincarnation possible. Selina declined murdering him and left after clawing the right half of Kai’s face.

Hellhound then became a mercenary. He recruited and trained a cadre of thugs, turning them into ninja. Much of his career as a merc is unrevealed.

In 1996 he was hired by the Collector. His employer sought relics kept in an ancient, traps-ladden tomb, and somebody (perhaps Kai) came up with the idea of having Catwoman defeat the deadly traps. Hellhound and his cadre of ninja captured Kyle while she was on another job, and they pressed her into service. 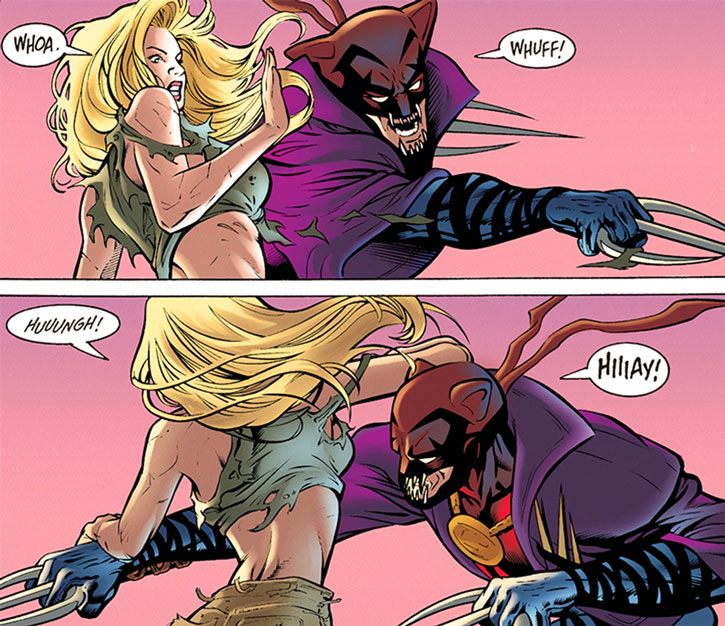 During that job, Hellhound found himself trapped in the tomb with Catwoman after a run-in with Ubu (Bane NLM). Catwoman was forced to free Hellhound so they could team up to escape. Once they had reached the surface, the truce ended, but Catwoman soundly defeated Hellhound and left him behind.

Hellhound recovered, and ended up working for one Mr. Pamerjanian. A former drugs lord, Pamerjanian had launched a new venture – a plantation crewed by rich persons he had kidnapped, who were kept alive as long as their relatives kept paying. This operation was wrecked by Black Canary, who defeated Hellhound in a duel as she escaped.

In 2005 Hellhound was seen in Gotham, serving as a bodyguard for Lew Moxon, an ageing mob boss. During a mob meeting, the situation degenerated into a war. Hellhound apparently killed Kwan Lin, the new head of Gotham’s main triad, but was apparently killed by Zeiss in return.

Another man — Jack Chifford — later bought the costume and name of Hellhound from the Calculator, but was subsequently killed on an alien planet.

Two unnamed metahumans were subsequently seen fighting for the costume and name, but the fight was interrupted and left without a known victor.

The “Hellhound” name is apparently considered to be a desirable property among some circles of supervillain-wannabes, so it is likely a new one will eventually emerge.

After Catwoman refuses to kill him, Kai is left with three nasty vertical gashes across the right half of his face.

Early on, Kai is largely defined by his weird faith. Apparently he believes that he can be reincarnated as a literal “hell hound” – though rituals, the passage of certain cycles and special circumstances are necessary.

It all sounds like an imaginary religion. He wanted to use Egyptian artefacts, made references to the yin-yang, and the afterworld he believes in is called Velek, which sounds vaguely Magyar. His faith was no longer mentioned in his later appearances, though. He likely ended up abandoning his strange, possibly unique mystical delusion.

Kai is very unpleasant. He’s humourless, arrogant, intense, macho, misogynistic, always 105% serious. He has a strong sadistic streak, and a tendency to act like a martial arts film bad guy. He even sometimes spout corny bits of dialogue intended to be threatening and obviously stolen from movies.

Hellhound has a strong interest in fighting highly reputed martial artists. However, his huge ego means that he overestimates his ability to meet such persons in single combat – especially women.

“One year ago I was on the threshold of entering the sacred realm of Velek — but you, cursed Catwoman, tainted the ceremony !”

Drawbacks:
Arrogant, MIA toward Misogyny. After Catwoman claws him, he acquires a Creepy Appearance (Facial scars).

In the 1990s, Hellhound trained a cadre of ninjas – at least two teams of about seven men. Those are simply disciplined thugs trained in stealth and ancient weapons, and Hellhound seldom hesitated to expend them.

After all his ninjas were killed off, Hellhound took to training a pair of bloodthirsty rottweilers, with the following stats: 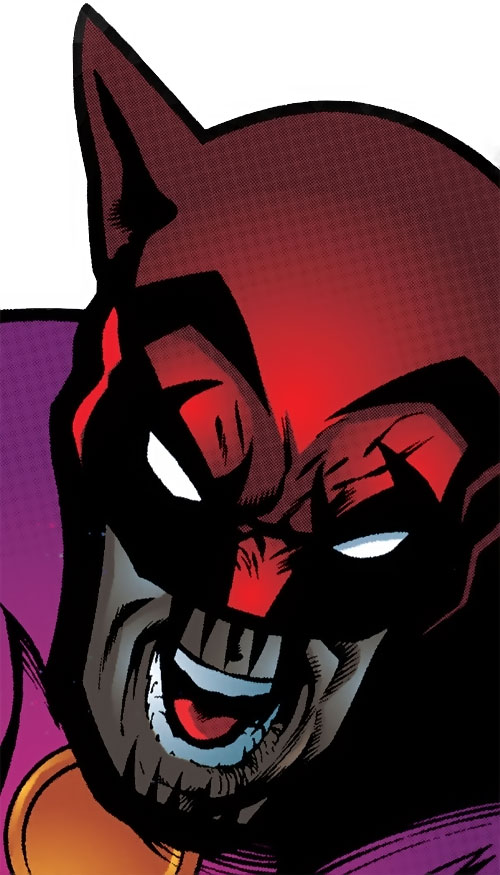 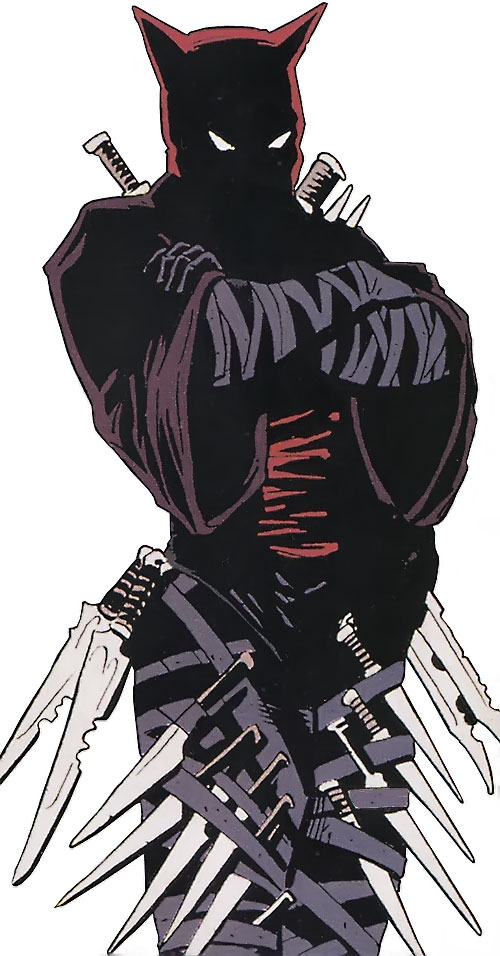 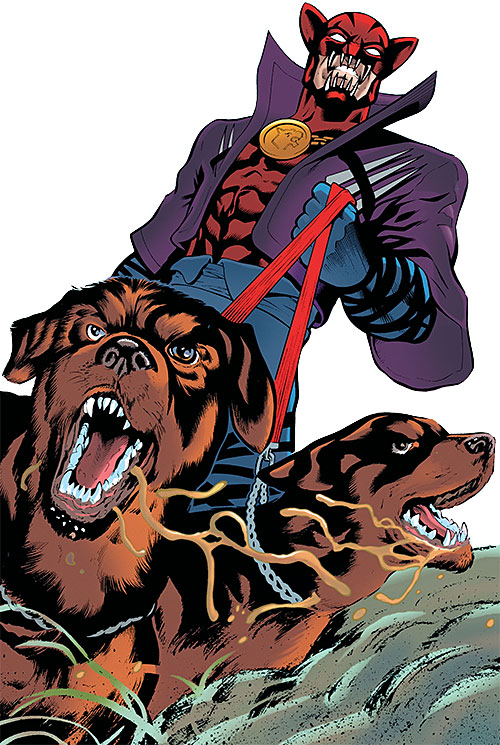 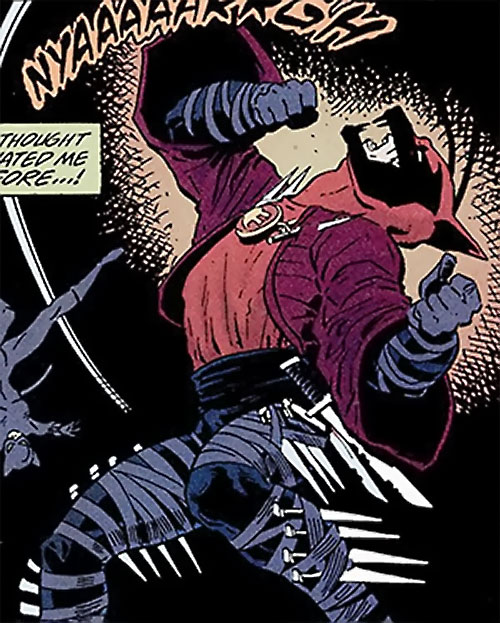 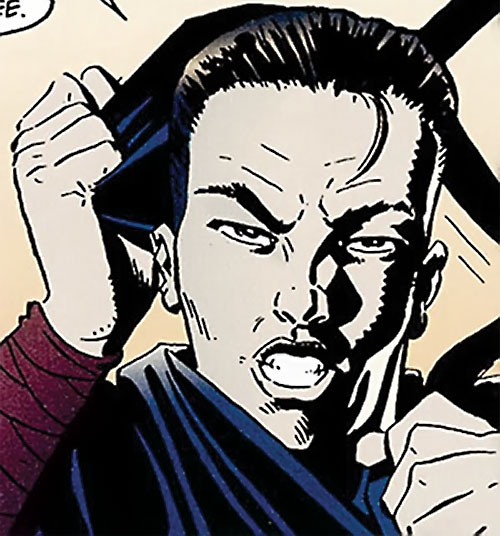