This profile has S P O I L E R S about it, and having Seven Soldiers spoiled is a thing most heinous.

Helligan is a sharp, experienced special agent and could thus fit a useful niche in many stories.

Helligan is a particularly smart, particularly efficient detective. She can quickly sift through large volumes of data and draw solid conclusions from it. She has a strong intuition and willpower. She’s not the sort of detective that plays second-fiddle to the heroes.

Her angle is to take a very high-level view of her cases. From this 100,000 feet-high perspective she gains a global understanding of what is going on, and the details usually fall into place. She has no problem letting her investigation wander into 50 years-old or otherwise distant events. This information allows her to build her big picture of what is going on.

She does not have elite combat or physical skills, though, but can function for several days with very little sleep.

When the LAPD detained the Shining Knight (Ystina), Agent Helligan was called in to handle the case. She was to figure out what was going on, whom the Knight was and how to process “him”.

Agent Helligan received the support of a specialist in pre-Atlantean antiquities. The expert knew enough about the numerous Camelots to communicate with Sir Justin. Within hours, Helligan could thus make sense of this horribly complex mess. During the interrogation she also drew Ystina’s sword from its sheath, but did not realise the significance of this.

However, said expert actually was the Queen of Terror in disguise. She had come to toy with Ystina and kidnap her.

As the Queen unveiled, a Sheeda strike force assaulted the precinct house. They killed a number of officers and left with Ystina. In the fray, the Queen bit Helligan on her wrist, vampire style. After seeing her draw the sword, the Queen could not resist corrupting her.

This is the hand, the hand that takes

Pumped full of antibiotics and drugs to cure the venom, Helligan did not stop. She had promised her mum that she’d prevent her sister’s marriage to a shady brute from the Lupelino family who occasionally beat her. She took a red-eye to New York City and hit the ground running.

Helligan was investigating the death of the Vigilante (Greg Saunders) and five others in Arizona. In New York she wanted to investigate a possible witness, the Bulletteer (Alix Harrower). Helligan intuited that there was a link between this and the Lupelinos.

Helligan recovered tapes from the incident, then grilled Harrower about what little she knew. From there she established a link between Neh-Buh-Loh, who appeared on the tapes of the death of the Vigilante’s posse, and the Nebula Man, who had scattered the original Seven Soldiers through time.

Researching the origin of the Nebula Man, she discovered he had been summoned by a Silver Age  villain called the Hand. The Hand’s special artificial hand was kept at the Hero Museum in New York. When she got there, the place was in complete disarray. Helligan basically stole the artificial hand in the confusion.

Enlisting the help of the Bulleteer, who was too nice to say no to a policewoman, Helligan confronted the Hand at the prison. She had Alix “accidentally” destroy the artificial hand finger by finger in front of his eyes to force him to talk.

Helligan also discovered a dark secret of the Vigilante. He had been bitten by werewolves early in his career. Although he kept his condition under medical control for his entire life, he was infected.

This reframed a discussion between the Vigilante and a Lupelino family member. It had taken place in presence of the Hand, who mentioned it during the interrogation. The Hand had thought the Vigilante was prejudiced against Latinx . But Helligan now understood that “the kin” Saunders had mentioned back then was werewolves. Which both he and the Lupelinos were.

From there, Helen realised that her sister Rose was about to marry a werewolf. Though utterly exhausted, Helligan asked the Bulleteer to carry her to the church. She arrived in the nick of time to object to the marriage. Agent Helligan passed out after saving her bone-headed sister from a terrible fate.

The odds that she will gain super-powers from the Sheeda venom are pretty high.

Helligan is a petite, curly brunette. She’s usually wearing business attire. Despite her slightly conservative dress and being a fed, she has a small piercing to the right of her nose.

After she was bitten and before she could be treated, she had the ’Sheeda look‘ – alabaster skin and completely black eyes.

Helligan is fast, smart and dedicated. Most people have a tough time keeping pace with her. She will tackle huge streams of information head-on and turn it into the whole story. This agent has little problem juggling with several very distinct lines of investigation at the same time. 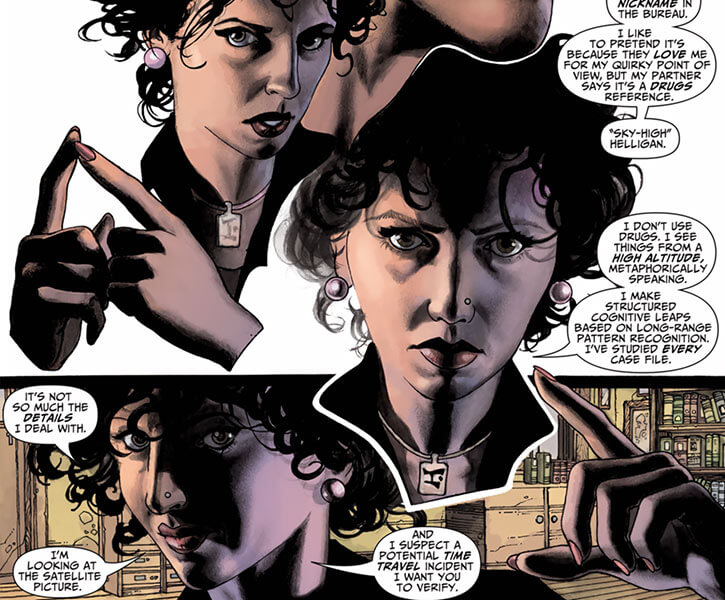 She comes across as authoritative and with extraordinary willpower, continuing to work even after an awful case of poisoning.

A veteran Federal agent working the metahuman scene, she is used to handling harrowing stress and carnage. Helligan is also fluent with the likes of sorcery, ghosts, otherdimensional  entities and time travel.

As she told Alix Harrower, super-criminals are *not* normal people. Therefore, she will not hesitate to employ tough, barely legal tactics to interrogate and otherwise thwart them. She knows she has to hit hard or become roadkill, and how badly outmatched she and other normal police are against metahumans.

Only the pure of heart

Helligan has a thoroughly pure heart. Even when her actions seem unethical (like having the Bulleteer destroy the Hand’s iron prosthesis in front of the aged criminal), she has an uncanny instinct to only brush with the limits in desperate cases. Most people only *think* they can do that.

The least morally justifiable thing she ever did in her life was putting some fish oil in her big brother’s milkshake when she was a little kid. After she confessed about this insignificant sin, she became pure enough to draw Caliburn Ex Calibur. But she was too humble to realise what it meant.

When reviewing her cases Helligan has a cynical black humor cast to her speech. This is probably in order to better handle the strain from the often incredibly violent and warped events she deal with. While she know that most people can’t handle her infodumps, she still had a hard time padding up or slowing down when she reviews a case.

Helligan has an odd ability to state things as they exactly are, even if she doesn’t realize it and think it’s just a figure of speech. Such as saying “somebody up there loves you” to Alix Harrower, the Spear of Aurakles.

“Me, I’m a qualified specialist in metahuman retrieval, but I think this guy has more to do with your speciality than mine.”

“Nobody’s sure how to put the guy through the system, which is where I get called in. But, and here’s what I’m hoping, if he’s from the past, he doesn’t count as ‘unregistered metahuman’. And the sooner you can prove he’s from the past, the sooner I can make it to my sister’s wedding in New York tomorrow. My mother *warned* me not to miss that flight.”

“Miz Friday, I have a nickname at the Bureau. I like to pretend it’s because they love me for my quirky point of view, but my partner says it’s a drugs reference. ’Sky-High’ Helligan. I don’t do drugs. I see things from a high altitude, metaphorically speaking. I make structured cognitive leaps based on long-range pattern recognition. I’ve studied every case file. It’s not so much the details I deal with. I’m looking at the satellite picture. And I suspect a potential time travel incident I want you to verify.”

“Magic mirrors, evil sorcerers, potions. Anything you ever heard of, it’s there in the files. Could be he slept in a cave or got preserved in ice, awaiting some future hour of greatest need. There’s a lot of weird stuff on disc at Langley. I’ve read things you wouldn’t believe.”

“Stay with me. I know it’s a lot of information, but that’s the way I work. Everything at once. Next slide, please.”

“They all set out on a big adventure and never came back. Welcome to the grimy, violent world of DIY superheroics.”

“If you’d joined the ‘seven soldiers’ we’d have [an obituary] slide for you too. Somebody up there loves you, Mrs. Harrower.”

Helligan: “You seem like a nice lady under the chrome. *uchh* I don’t think it’s good for you to get wrapped up in any of this creepy cape stuff… *urrchh*“
Bulleteer: “Is everything okay ?”
Helligan: “Guess I’m reacting to the antibiotics and tetanus shots they gave me last night after I got bitten by a fucking vampire.”

“See, in less than two hours, my sister gets married to a scary guy who beats her up. My mom made me promise I’d find a good reason to stop her. So I had to be here, sick or not.”

Drawbacks:
Dependants (her sister and family).

She’s a brainiac, brainiac on the floor ● 1 point ● Descriptor: Skill
Quickness 1 and Enhanced Advantage (Luck) (both Limited 2 to deductive reasoning and information perusal).

As usual, this isn’t scaled with the very high stats for stock NPCs in the DCA rulesbook. 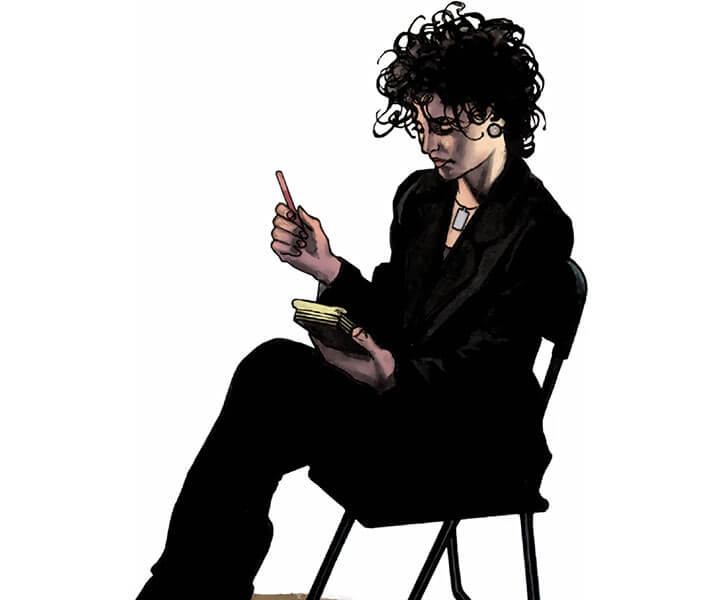 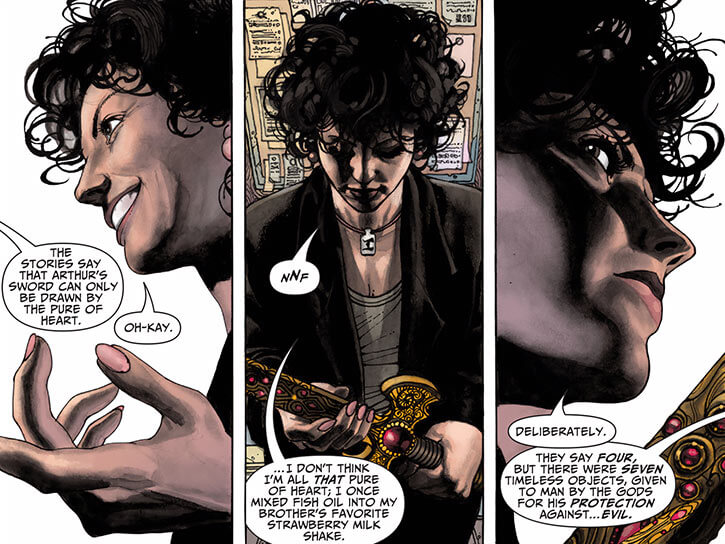 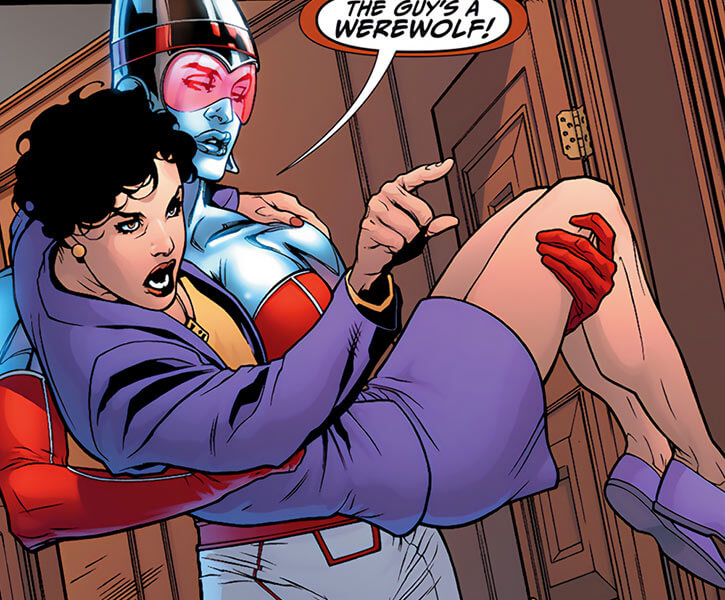