Hellstrike is a seedling (Mutant), the people who were genetically affected by the Comet Effect of the 1960’s. He’s a living weapon of pure energy, what the scientist call a gaseous sentient posthuman entity.

Unfortunately, since one of his first missions, he’s been bound to a containment suit that prevents him from explosively dispersing.

Formerly a Scotland Yard’s inspector, he also proved to be a valuable asset in non-combat situation. Having operated initially in Northern Ireland, he’s particularly good at counter-terrorism.

Nigel was born Irish in Belfast. He served in the British police constabulary in Belfast for some years before moving to London. There, he fell in love with Anne, his partner. Their relationship lasted until an Irish terrorist/mercenary by the name of O’Brien killed her in front of him. In the ensuing fight, Keane was mortally wounded.

But before dying, his powers manifested, saving his life and making him Hellstrike. O’Brien later became the villain Deathtrap, leader of the MERCs.

Nigel joined StormWatch One, the main team of superheroes serving the UN. In the Wildstorm universe, the UN is secretly a menacing worldwide conspiracy led by gun-toting, paranoid “Secret Masters”. While they are heroes, the operatives of StormWatch are quite ruthless and do not hesitate to violate the rights of a country in order to advance the agenda of the UN.

After a battle against Deathtrap, Hellstrike was severely injured. He fell into coma and his neural circuitry began to fall apart. His body started to lose cohesion. Hellstrike broke into pure energy in a tremendous explosion that ruined Skywatch’s sickbay. At this time, Nigel decided to give up his life.

Then, Fuji contacted him in his comatose state and persuaded him that his life was still worth something, with Fuji using himself as an example.

With the help of StormWatch engineering genius Link, Nigel received a tailor made containment suit, much like Fuji’s. But where Fuji’s gives him the control of his own density and avoids radioactive gas leaks, while Hellstrike’s acts as a force field preventing him from exploding.

At some point, he began a relationship with Fahrenheit. They kept it secret until Weatherman Battalion found out. As they knew, it was contrary to regulations about fraternization between field officers. Battalion had to break into Hellstrike’s quarters because neither he nor Lauren were responding to the radio calls.

Hellstrike was one of the four officers that died in the Aliens infestation.

Hellstrike looks like a humanoid made of blue sparkling energy. His hair looks like lightning, his eyes are glowing white.

He usually wears a black leather jacket over his containment suit, and attaches his Stormwatch fetish on his right shoulder with a golden chain coming from his left shoulder.

Hellstrike made his face vary a bit over the months. Sometimes “growing” a large Celtic moustache, sometimes being “cleanshaved”.

He’s also a proud drinker, placing his alcoholic capacity at the level of his manhood. This flaw has led him to bad brawls, particularly a famous one in Clark’s, the Washington DC’s bar reserved for superheroes.

Nevertheless, he is a fiery fighter when it comes to business, and these Irish traits makes him a dedicated team player.

“What part of ‘You’re under arrest’ did you not understand, wee lad ?”

An interesting possibility would be that the Guardians only existed in the 70’s, and that StormWatch is a newer incarnation of that team, replacing the JLI as the UN-sponsored team. 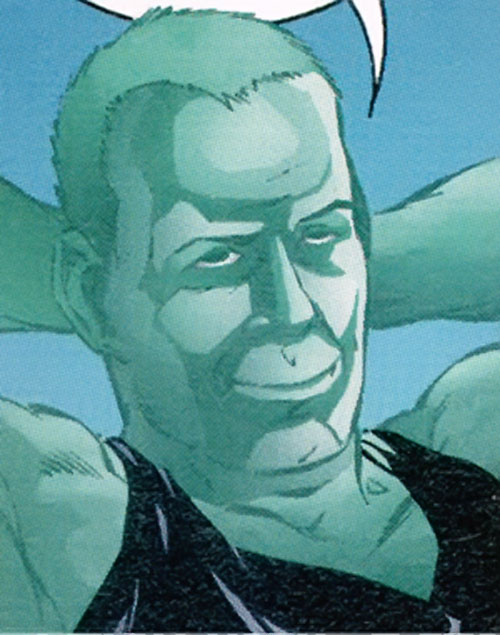