The Hidden was a 1987 action-horror movie. It wasn’t a commercial success – genre movies seldom them back then. But it was intriguing, distinctive and well-made. Such characteristics made it a cult hit. It also had solid critical reviews – which is notable for geeky material during the 1980s.

The alien villain also is a ready-made scenario, though of course the concept is less notable nowadays.

The Altarian Alien’s abilities probably are inherent to its’ species. The core one is that it can possess another living being by entering its’ mouth. From there the alien will take control of the brain and nervous system.

The possession subject has no sense of pain, which greatly bolster their durability. They have a superhuman level of toughness. For instance, a possessed human can take dozens of gunshots and still keep going on.

The Altarian is also lethally skilled in all sorts of weapons, and is a master of using any type of vehicle. Being a member of an alien race, it probably has some scientific knowledge unavailable to humans.

The alien is highly practised at escaping pursuers, and has an infernal-seeming talent for staying one step ahead. In DC Heroes RPG terms, most of its Hero Points  are spent evading capture.

I strongly recommend that you see The Hidden. The story in short is:

The elite alien criminal known only as the Altarian Alien arrived at Earth around 8 years ago. It took possession of human bodies, using them up until they could take no more physical abuse, then switched to a new one. It had an extensive interest in modern rock music and Ferrari cars. The criminal took whatever it wanted, and killed anybody getting in the way.

As DeVries, it killed 12 men and hurt 23. It stole six Ferraris. It robbed a candy store, six shops and eight banks. After the final bank robbery it drove away in a Ferrari with a massive police force hunting it. The police took bad casualties, and “DeVries” badly crashed his car.

The alien was hunted all the way to earth by some sort of police named Ras Alhague. Alhague took over the corpse of FBI agent Lloyd Gallagher to obtain local police help, particularly from an officer named Tom Beck. “Gallagher” located DeVries in a hospital, looking to fully destroy the body with the alien still within.

He came in too late. “DeVries” had already woken up. Since the body was now unusable, he took possession of another patient in his room named Jonathan Miller. As Miller, the alien robbed a music store and a car store. He killed the owners and more in both those places.

Gallagher was now hunting Miller, but ended up finding Miller’s dead body. The alien had left Miller for a stripper named Brenda. Brenda sexually killed a guy and went on to kill some police officers.

Gallagher and Beck caught up with Brenda and shot her dozens of time. Still refusing to surrender, Brenda jumped from the roof they were on and apparently died. Gallagher rushed down to finish the possessing alien, but the body was empty when he found it. The Altarian was now residing in a dog that had passed by Brenda’s body.

The dog, that belonged to Lieutenant Masterson of the police, killed it’s owner later that night. The alien then possessed Masterson instead. As Masterson it went on a killing spree in the city hall. When again lethally wounded by Gallagher, it changed body to Senator Willis. Officer Beck was fatally wounded during this clash.

Gallagher finally caught up with the alien. Despite being shot multiple times by the guards trying to protect “Willis”, he shot him with a flamethrower. “Willis” died and the Altarian crept out of his mouth.

Then, before it could do anything else, Gallagher shot it with an alien gun designed to destroy Altarians. The Altarian exploded and died, and Gallagher was hospitalized. When Gallagher got the chance to visit Beck, Beck finally died.

But Ras Alhague, his job done, now wanted a new life and to help Beck’s family. He possessed Beck, reanimating him and taking over his identity.

The true form of the Altarian Alien is a small, slimy worm-like creature with multiple appendages. Since it basically always resides within humans, it looks like any human under its’ current possession.

Since the alien is, indeed, an alien, its’ body language and speech is very strange.

The Altarian Alien has something of a one-track mind. It loves rock music and fast cars (particularly Ferraris, heheh, it probably likes fast spaceships as well !). It will do anything to get these things. If it wants something it just takes it, and if anyone is stupid enough to try to stop it, it immediately kills it either by gun or its’ bare hands.

It speaks in a very simple manner and mostly gives commands. It might also gesture various commands such as “come here”. It really enjoys killing humans, probably seeing them as some sort of lower life form. It does so at any occasion when they irritate it the least, which is the case often. Total ruthlessness is the keyword here.

It apparently enjoys action, speed and danger and has no fear about revealing what it is. Although it wouldn’t since it speaks very little. Basically, it wanted as much fun (killing, speed, music and danger) as possible on its’ permanent stay on Earth.

Hmm…the Altarian Alien could be a remaining Alien from the Invasion  as a member of a minor alien race from the Altarian system. It could even be one of the Appelaxians who came to Earth many years ago.

Considering its’ appearance it could be related to or even be a Durlan, but is probably best left over as a member of a new body-snatching race.

Equipment:
Usually some kind of firearm.

Source of Character: The Hidden – movie. 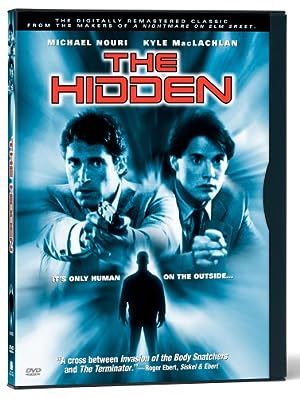