The High Aldwin is the Nelwyn sorcerer appearing in the 1988 fantasy/adventure film Willow.

For more context, you can first read the Willow character profile.

The High Aldwin is a sorcerer with the ability to cast many spells and create magic items.

He’s the wisest and most learned person in the village. Everyone turns to him for knowledge. He’s held in the highest regard.

The High Aldwyn is aged and a bit overweight. 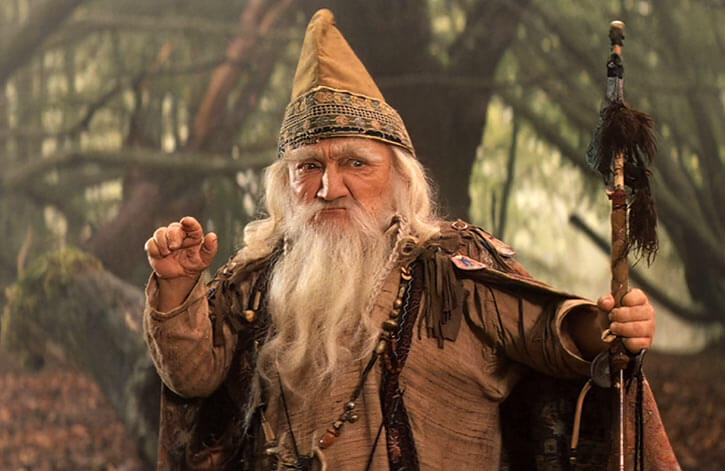 Being the High Aldwin is a title that’s earned. It doesn’t go to just anyone.

Only a Nelwyn showing a natural affinity for magic can be taken on as an apprentice by the current High Aldwin.

We first saw the current High Aldwin when Willow went to the festival. The wizard arrived with much fanfare. Four young men carried him on a seat and the band played for him.

Willow and two others presented themselves for consideration. However, the High Aldwin hadn’t selected a new apprentice in years. He had come to the festival to do just that – in front of the entire village.

A test of intuition

His test for a new apprentice was a simple one. Select the finger that wields the power to control the world.

He then held out his hand for the apprentice hopefuls to choose from. Of course, all choices were wrong. He wanted them to choose their own finger. On this day, he turned them away as no one did. No apprentice this year!

Suddenly, a death dog charged onto the festival grounds. It mercilessly attacked a baby crib. Nelwyn warriors surrounded it and slew it. 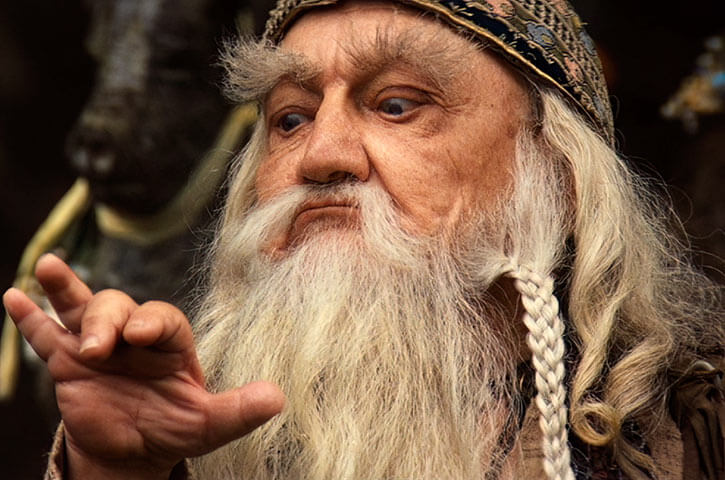 Something must be done. Who’s to blame?

A town council met to determine what this meant. They asked the High Aldwin for insight and a plan of action.

Willow also presented a Daikini baby. His own children had found her in the river by his farm.

The High Aldwin consulted the bones. He determined that a group of brave souls should carry the baby to the Daikini crossroads. There they would hand over the child to the first Daikini they met.

The next morning, the High Aldwin armed Willow with three magic acorns. He sent the group on their way and urged them to come home swiftly.

A few days later, the group returned… without Willow, Meegosh, or the Daikini baby.

A few more days and Meegosh returned alone. He and Willow had met the Fae Queen Cherlindrea and she had named Willow the baby’s guardian. Willow would follow a couple of Brownie scouts to find the sorceress Fin Raziel.

A little over a week later…

The High Aldwin was with the village when Willow returned. He was so proud of what Willow had accomplished. Then Willow surprised everyone, even the High Aldwin, when he threw an apple in the air, and in a flash, it became a dove.

Looking the part of the aged sage. The High Aldwin has long white hair and a beard. Portions of his beard are braided.

He wears thin brown robes and a pointed hat, all with tiny embroidered details.

Often, one eye will pop wide while the other is pinched shut – or he’ll stand with both eyes wide. Presumably, there are damaged muscles and/or nerves around his right eye.

The High Aldwin has a high-pitched gravelly voice. 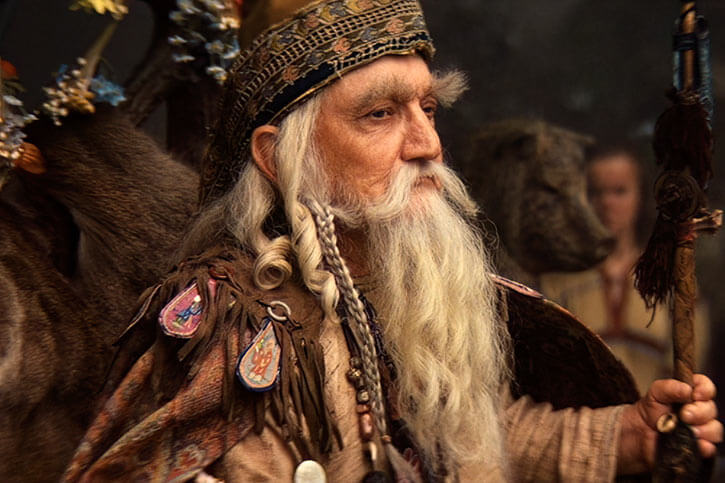 He acts special, above the other Nelwyns. This is the nature of his job. He must portray himself as mysterious. He must demand respect.

When he speaks others listen. This skill he’s honed over years of practice.

The High Aldwin is wise when dealing with others. For instance, at the town council, Burglekutt suggested they let the death dogs have the baby. Instead of looking surprised and reacting, “You can’t! They’ll kill her” as Willow did, the High Aldwin insisted the child was special.

At this point, the High Aldwin knew nothing of the prophecy or even her mark. He just wanted the village to take the baby outside their boundaries.

Then again, when Burglekutt insisted the best warrior stay in the village, the High Aldwin didn’t stand his ground about having the warrior go out. Instead, he insisted on Burglekutt going. Which had the same effect. 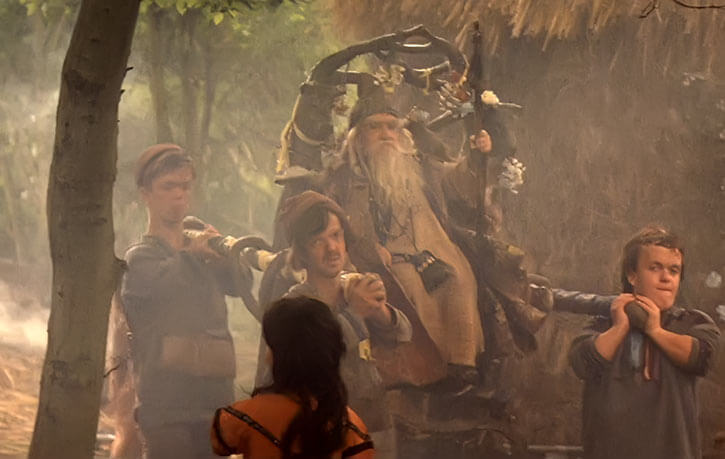 “Magic is the bloodstream of the universe. Forget all you know… or think you know. All that you require is your intuition. Now. The power to control the world is in which finger ?”

“I will consult the bones.” (The High Aldwin tosses the bones to the floor. The villagers await what the bones will say.) “The bones tell me… nothing.” (whispered only to Willow)

(To Willow) “More than anyone else in the village, you have the potential to be a great sorcerer.”

High Aldwin: “What brave people. The outer world is no place for a Nelwyn. Give the baby to first Daikini you see, then hurry home.” (casts a spell then, tosses a stone in the air and it becomes a dove) “Go in the direction the bird is flying.”
Burglekutt: “It’s going back to the village !”
High Aldwin: “Ignore the bird, follow the river.”

A 303 points Character (Without Rituals and equipment).

Transformation spell
Effect: Transform 06 (bird only)
Casting Time: Instant.
Components: 00 (Cost in APs).
Special Restrictions: Toss an object, like a stone into the air.
Comments: This Ritual was used by both Willow and the High Aldwin.
Cost: 25.

Looking online for actor Billy Barty’s weight, I found from 75 to 88 kg. This seems high considering his height. We ended up assuming that the given weight was actually in pounds.

Wealth is rated at 001 with the assumption he is taken care of by the village. The High Aldwin lives in the village but has no real income. He doesn’t charge for his advice or magic. I don’t see him interacting with money much at all.

His name isn’t stated in the movie, but Willow wiki has his name as Junn.

Source of Character: The 1988 film Willow, played by Billy Barty  .