The Hijacker died in 1986. Though he did return in 2009, that was well after this profile was completed.

The Hijacker seems to be a decent engineer. He can build unusual (though not genius-level) gadgetry.

Early on his greatest weapon was an ancient vapour. Obtained from unspecified Indians in Peru, it could put men to sleep and make them forget what happened.

He’s fairly smart and resourceful, but apparently wasn’t too good as a businessman. He seems to have a knack, though, for spontaneously using technology after having but briefly seen it – which means he’ll often use nearby consoles, machinery, weapons, etc. to good effect even if he’s never seen them before. Which matches his villain name, I guess.

During his second appearance, the Hijacker was not just an engineer with a gas mask. He was a super-villain. Not only was he a more competent fighter and adventurer, but he had built cutting-edge equipment.

His costume now had stronger protective properties (Cold Immunity is not demonstrated, but I assume it’s there), and he had a unique weapon which could be set to shoot :

Though during his second appearance he did not seem to have his old memory lapse gas. Instead he had a colossal threaded vehicle, which initially seemed pretty much indestructible.

The crime-tank could easily crash through earthquake-proof vanadium steel walls. It could withstand the punches of the Thing himself. It also had some sort of magnetic weaponry that could be used as tractor beams (and likely as repulsors).

It is unclear which parts of his equipment he built. The original crime tank, in particular, was probably hijacked. If the Hijacker stole an unfinished prototype, that would explain the weak points.

Howard Mitchell’s armoured trucking company was failing. His efforts did not manage to save it from a slow financial death. A less-than-scrupulous man, he came up with a plan during a vacation in Peru. That was where he discovered a memory-lapse-causing vapour used by forest natives. 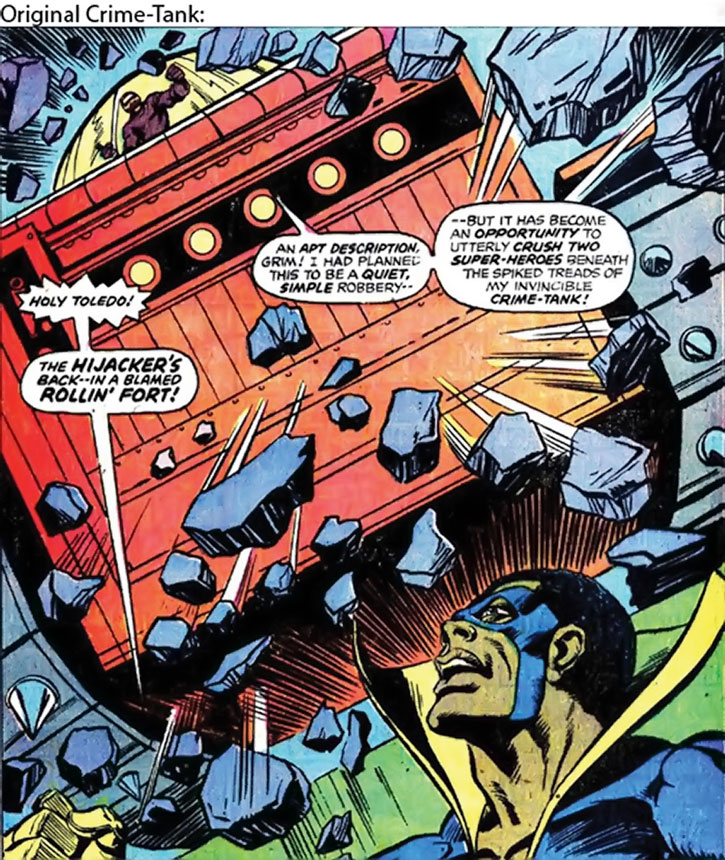 Equipped with a gas mask, vapour grenades and other gadgets as the Hijacker, he hijacked his own trucks. The goal was to steal considerable sums from the payrolls they transported. He would attract his trucks in the back of a tricked-out truck with an electro-magnet. Then he would gas his guards with the vapours before forcing the truck open with a cutting torch.

Since he drove away with the truck and everything and the guards were left behind on the roadside with no memories of what had happened, his hijacks were the perfect crime.

However, Ant-Man, who was back then a major super-hero, eventually foiled him. Mitchell was arrested.

How Mitchell got free is unrevealed. But he apparently next had a fairly successful career as a minor super-villain operating far from the usual super-hero haunts. Since when he was next seen, he was much better trained and had some impressive equipment.

This second appearance took place when the Hijacker stormed a facility of Stark Industries. His goal was to open the special vault there and hijack several Stark prototypes worth millions.

When the Hijacker attacked (using stolen floor plans), the Thing (Ben Grimm) was helping Stark researcher Bill Foster and the scientific “whiz kids” team test space exploration gear. The Hijacker deftly gassed the scientists and locked the Thing into the simulator. Grimm could not break free without exposing the unconscious scientists to Venus-level heat.

The Hijacker’s daring attack was foiled since Bill Foster was secretly the Black Goliath. He and the Thing teamed up and stopped the Hijacker, though it wasn’t easy. Mitchell was knocked out by the Thing and likely arrested.

In 1983, , the Hijacker was part of the numerous villains who attempted to gain revenge on the Thing. That was when the Thing was hospitalised after his epic fight with the Champion. However, a small army of allies of the Thing was keeping watch over the hospital.

When the Hijacker’s tank approached, crushing numerous parked cars, Iron Man flew. He destroyed Mitchell’s enormous tank, apparently a much inferior version of the 1977 one.

Hijacker’s fourth appearance was also his last. He answered a call for a meeting among C-list supervillains. The objective was to discuss the menace of the Scourge of the Underworld, who was preying on their ilk. This meeting turned into a death trap, since a Scourge had infiltrated it as a bartender.

Hijacker, like the other villains present, was seemingly killed by the assassin.

Hijacker was an excellent planner. He also thought quickly and accurately in the field. Apparently he had gotten quite competent and experienced at the super-villain thing since his 1962 encounter with Ant-Man.

Like many villains, his main drawback was his overconfidence (he really loved his toys). He thus tended to underestimate the heroes he was facing, even if they are renowned powerhouses such as the Thing.

“With my vario-blaster adjusted for nuclear flame — not even Stark’s molybdenum steel vault can deny the Hijacker entrance. Perfect ! My equipment is flawless… as is my planning ! How brilliant to first steal the blueprints to this plant from Stark’s industrial architecture firm’s files !”

“I had planned this to be quiet, simple robbery — but it has become an opportunity to utterly crush two super-heroes beneath the spiked threads of my invincible crime-tank !”

Drawbacks:
Originally has a Secret ID.

Originally, the Hijacker had a DEX of 02 and his Gadgetry was but 04. He did not seem to have either Acrobatics or Weaponry – nor the Schtick. 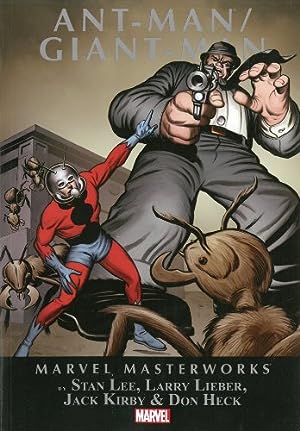 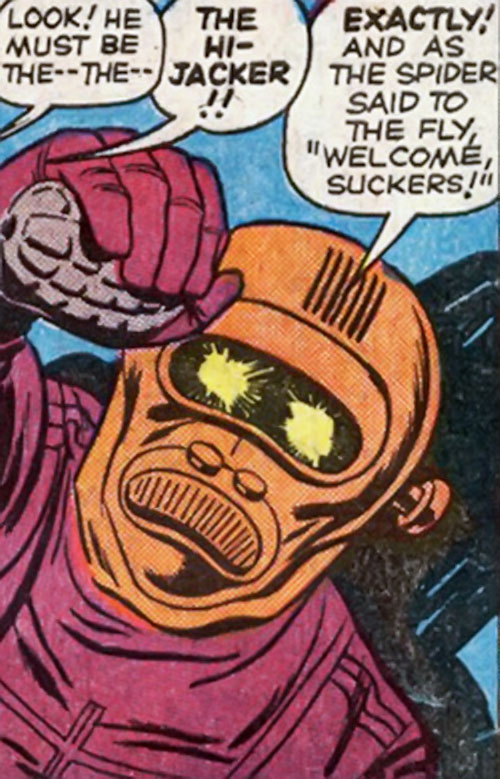 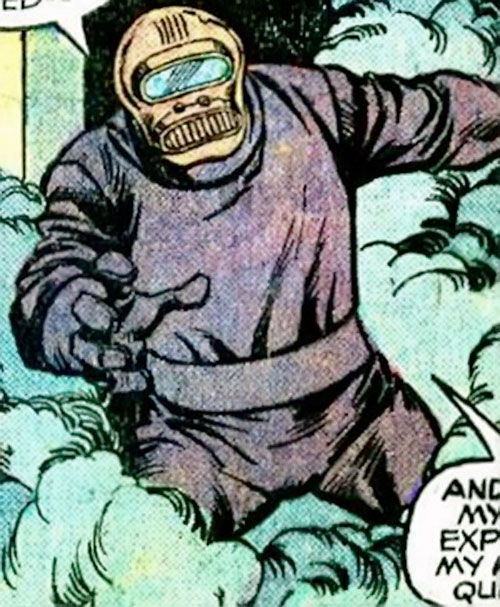 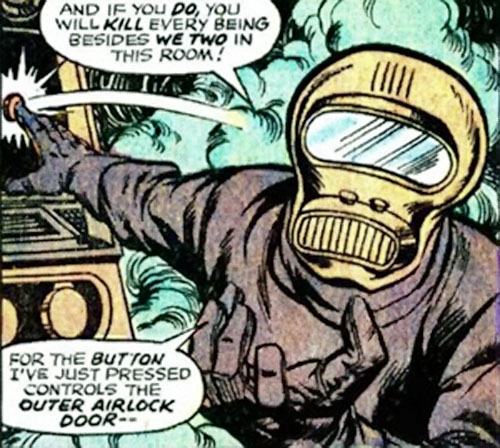 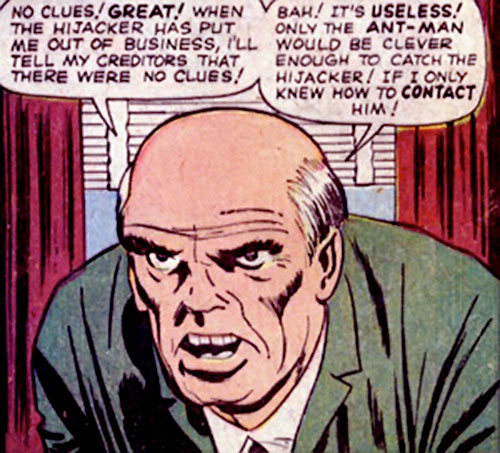 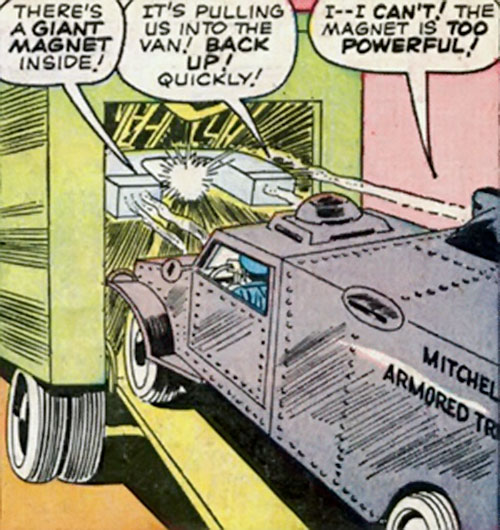 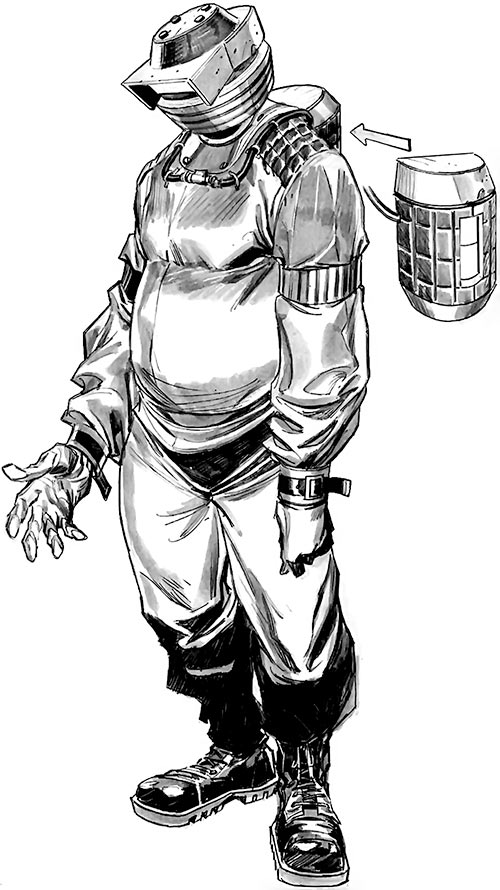