Remember 1993 when there was that whole Bloodlines thing ? You know, Superman was dead, and really big beasts that looked like they were from Aliens came down in everyone’s Annual to wreak havoc ? And in each annual, at least one new hero was born because the aliens sucked some fluid out of humans brain stems, causing their metagenes to activate ?

No ? You thought it was stupid ? Well, so does Tommy Monaghan the Hitman. Unfortunately, that’s how he got his powers, and he gets a big kick out of his origin.

Tommy is a hitman. He’s not known as “Hitman”, but as *a* hitman. Of course, Tommy has a specialty. You see, that alien that licked his brain gave him the powers of X-ray vision and telepathy. He can see his opponents and react. He can read minds, man.

Of course, Tommy is a good guy, to say the least. He takes hits that ordinary hitmen won’t take, like going after The Joker and stuff like that.

His specialty is super-powered targets. Etrigan on your back ? He’ll take him out. Got a Riddler in your pants ? No big deal. Of course, there is his personal code against killing superheroes, though he had to think a bit about wanting to take out Green Lantern Kyle.

Hitman first showed up in The Demon Annual #2.

Tommy’s first few adventures can be found in The Demon, where he teams up with/against The Demon Rhymer Etrigan and Jason Blood. Later on in his own series, he is hunted by the Siamese twin mobster of whom he killed one half. He has hits taken out on him, and takes hits himself.

He has been approached by the gunsmith demons of Hell to help become one of their crowd, but declined. He has taken out hits on the Joker, and even shot at The Batman (though only in the armored places). He’s met GL, and has a close relationship with his entire section of Gotham.

He and his fellow hitmen hang out at Noonan’s, a bar in Gotham. Also the secret headquarters of “The Justice Gang”, of which the hero “Six-Pac” is a member. The Justice Gang is exclusive. They didn’t let GL in, because “They only take originals”.

Tommy has taken out Nightfist as well, who is a “hero” who takes the drugs from villains and redistributes them amongst the streets.

Tommy has black, scraggly hair. He’s of Irish descent (the last name). He drinks a lot, and cracks jokes. He’s always wearing dark shades so you can’t see his eyes, which are entirely coal black.

He tends to wear blue jeans, a black t-shirt, and a dark green trench coat. Oh, and he’s always packing.

This is the exact ethical opposite of popularity. Most non-essential, criminal-related NPCs begin play with an Attitude of Friendly. This Character is respected among the Criminal Underground and Mafioso groups. In addition, he is known to Street Gangs. Multi-Attack penalties on Persuasion attempts against above described non-essential NPCs are reduced by one Column Shift when made by a Character with Notoriety. 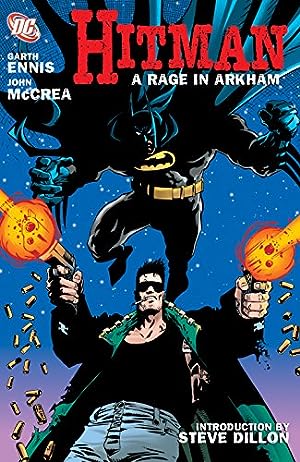 Hitman Vol. 1: A Rage In Arkham 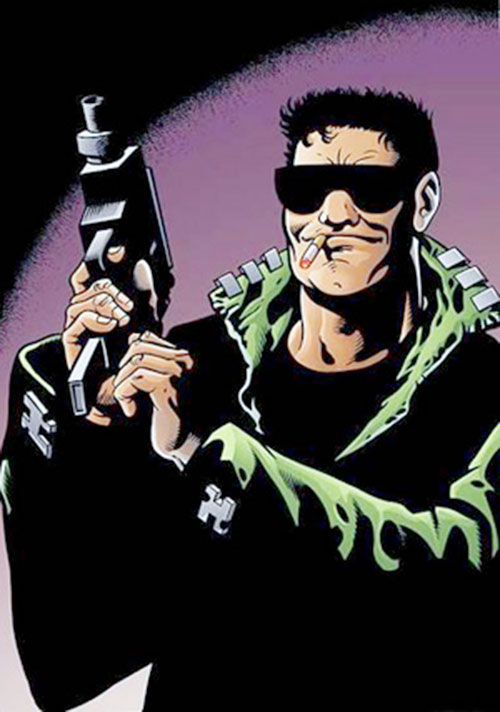