The Hitman has no superpowers, but is an extremely able assassin. He’s well trained physically, is a very good fighter and handles weapons like no one else. He has intelligence skills such as tracking, intimidation, etc.

Quite often he modifies his weapons to better be able to take down a particular opponent. Being a man of action he’s also capable of handling most vehicles and sneak away when the action gets too tough.

Lastly he’s an expert at strategy and prefers to carefully plan every hit with a backup plan ready.

Burt Kenyon has a military background. Afterwards, he was first hired by a criminal organization calling itself the Syndicate. The Syndicate was dedicated on taking over the New York Underworld.

The local leader of the Syndicate, Mr. Morgan, had had a run-in with the Vulture. It ended with his humiliation before his men. As a result, Mr. Morgan wanted to have revenge and to humiliate the Vulture and thus called in the Hitman.

The Hitman had several run-ins with both the Vulture and Spider-Man. But despite careful planning, he failed in his mission. At the critical point when he was going to execute the Spider-Man from a distance the Vulture flew in his way. As a result, Kenyon ended up shooting apart the flight generator on the Vulture’s back instead. 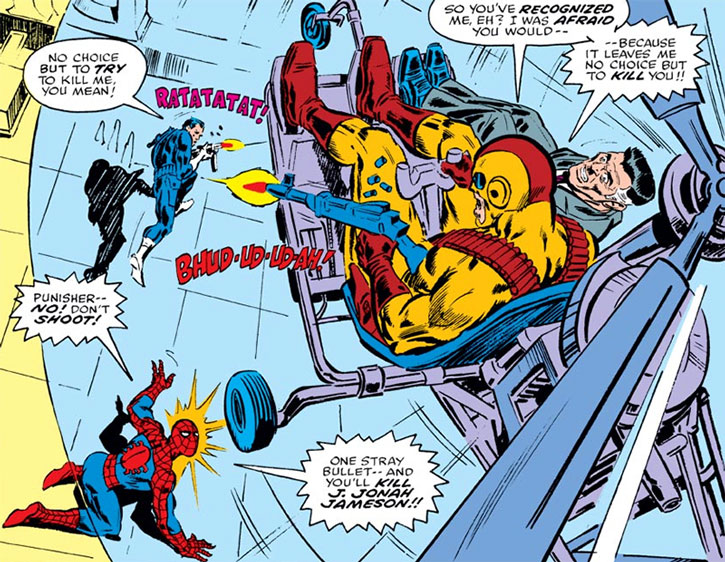 As the Vulture had been defeated, the Hitman’s contract no longer applied. Spider-Man jumped in the direction of the shooting, but was unable to find the Hitman. The Hitman successfully escaped and was presumed to continue with contracts elsewhere.

He later resurfaced for a showdown with the Spider-Man and the Punisher, but has since not been seen again.

The Hitman looks quite cool. He’s a costume that gives him a typical supervillain look. The costume is a full body suit in orange color and gives him some protection against physical attacks.

He’s extremely loaded with weapons (that somehow are kept hidden on the costume). He wears two full ammo belts around his chest like a cross. He’s also got a pair of brown boots with a knife attached to them and a brown belt with two holsters with weapons.

The hands are covered by brown leather gloves and the head is protected by a helmet that protects him against gas attacks and against blinding attacks. In the field he’s always seen with a weapon in his hands in ready position.

The Hitman is a dedicated hitman who plans every hit extensively. His plans often involve setting opponents against each other and at the right time defeat the one he’s after.

He’s got something of a glory hound trait which makes him gloat at times. The Hitman is always in high spirits and is often seen around with a large smile on his face, even during combat and threats of death.

He never hurries anything, but takes good time with everything. He believes in his plans and that everything takes its time. He apparently has no problem going against several superpowered individuals at once and always has an escape plan ready. When reporting to his employer he talks in a strict military fashion.

“Here you see a born warrior that is fast and has lightning reflexes – plus the ability to turn around, roll and end the show with one shot !” (shoots the man who was ambushing him)

“Perfect ! I only hurt him. This is gonna be a hit that people will talk about for years !”

Sure, just insert him. He could be used as a hitman being hired by any organization or criminal for going after an individual or group of superheroes. Any villain with a Underworld Connection should be able to get into contact with him.

He’s very good so any 450 HP character should have trouble defeating him or even avoid getting ’hit‘ by him.

Hitman has a specific Rich Friend Advantage — when hired to perform a hit, he will negotiate expenses coverage and boost his Wealth as per Rich Friend. This is conditional, though – the GM may decide this Advantage does not work of the employer cannot aford it, Hitman gets out-negotiated, etc.. 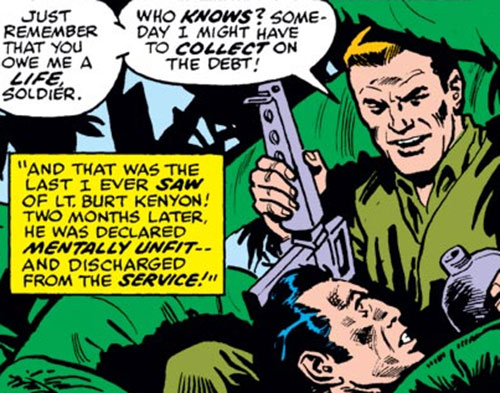