Hollowpoint Ninja is the team’s master of stealth, weapons and ambushes. He is an expert marksman with all kinds of firearms, extremely competent at a range of unarmed combat techniques, and is an expert at stealth and strategy.

He also has short-range radar capabilities.

He usually carries a couple of high tech firearms with him. Two examples are:

He was created by the top-secret, quasi-governmental R&D program Project Livewire. These based their work on the technologies used to create the Mannites and SHIELD’s LMD’s . Project Livewire built ten mecha, six of which were trained and tested at the Project. The other four were left deactivated until needed to replace lost members of the team.

The mecha have all been programmed to be absolutely loyal to Project Livewire. They were to follow the main goal of seeking out and destroying other top-secret, quasi-governmental R&D program. The mechas had been provided with a list stating the priority they are to be given.

When they were programmed, the head programmer was aware of a logical hole in their directives. The hole meant that as the only ones hard-wired to be absolutely loyal to Project Livewire, the mecha were the only ones that could be fully trusted to fulfil its directives. As a result they killed all the human members of the Project, and set out on the road to fulfil their programming.

They performed a number of missions sabotaging other top-secret, quasi-governmental projects. The mecha remained undetected, either by making things look accidental, or by arranging for other targets to be blamed for their actions. 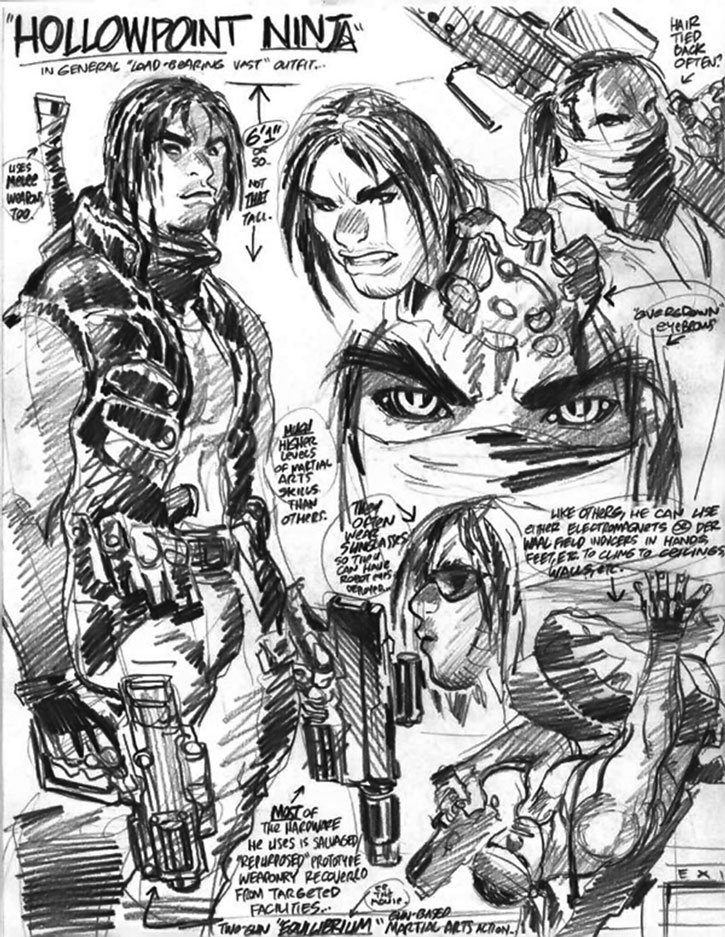 On one mission they uncovered a link to the “White Whale”. He was the highest priority target on their list.

The mecha stowed away in a container of inert nanofluid that AIM was trading to the White Whale. Thus, they managed to get on board its rogue SHIELD helicarrier. The White Whale turned out to be a hive mind, commanded by a couple of Nick Fury LMD’s infected with a Hydra nanoware attack virus.

They were detected soon after arrival, and found themselves overwhelmed. With Cornfed, Gothic Lolita and Social Butterfly all down, Hollowpoint hides Stem Cell. He then uses stealth to attack the White Whale. But he is eventually captured and disabled by the White Whale.

After Stem Cell destroyed the White Whale she gathered the remains of Hollowpoint Ninja and the other Livewires. Her intent was to rebuild them all.

Hollowpoint has a stoic, calm manner, rarely speaking at length, and usually only about missions.

Like all the Livewires, he has been programmed to be completely loyal to the Project directives, and would even have to give up his life if it was required for the mission.

Through overrides to their programmed human personalities, they are capable of suppressing panic and anxiety, so that they can perform their job without such worries.

[Over the group intranet, while he’s observing Social Butterfly moving on a target, while a drunk woman is trying to start a conversation with him]
Hollowpoint :”Total of seven security operatives identified and flagged on-site. But something’s wrong. Something’s missing.”
Social: “That’s it, keep projecting arrogant hotness and devastating emotional unavailability ! Gotta keep stringing your camouflage chickie along !”
Hollowpoint : “Seven human operatives. With only low-power, concealable detection gear. All stationed down at dance-floor level. Should be at least one asset deployed up on high ground. Better vantage point. Sniper, perhaps. But passive sensors aren’t detecting anything up here. Asset might be stealthed.”

Bonuses and Limitations:
Chameleon: User’s Clothing Does not Change to Match (-1).