The Homeless Avenger was a fairly good hand to hand fighter.

The Homeless Avenger was an unnamed vigilante who took vengeance upon those criminals who preyed upon the homeless in New York City. He would stop crimes against the homeless and then kill the perpetrators. The Avenger usually used whatever weapons the criminals had threatened their victims with.

In the meantime, the Homeless Avenger stopped a homeless man from being killed by a thug in the subway. He then threw the aggressor on the tracks in front of a train.

The chase goes on

After an argument on the ethics of the case with the Vigilante, Black Thorn went out on her own to interrogate the homeless people who had refused to help them earlier. She almost caught up with the Homeless Avenger on a rooftop, but he unknowingly eluded her (after tossing an attacker off the roof). Black Thorn didn’t know (or care) that the Vigilante was pursuing her as well.

Later that morning in Grand Central Station, a bunch of thugs accosted a homeless man sleeping against the wall. They did not realize that it was actually the Homeless Avenger. He killed one of them and announced himself to the whole terminal, which roused nearly 30 creeps who had known people the Homeless Avenger had killed.

As they were about to attack him, Black Thorn arrived and knocked out five of the attackers with tranq thorns, wanting to collar the Homeless Avenger herself.

As she turned her gun on the Homeless Avenger, the Vigilante’s nunchakus flew out and knocked her weapon out of her hand.

As the rest of the terminal watched, the Vigilante and Black Thorn argued and then fought, with the Vigilante finally knocking her out. The Vigilante offered his help to the Homeless Avenger against the crowd closing in on him, but the masked man refused, saying that the Vigilante had done enough already.

The Vigilante left carrying Black Thorn, and the Avenger faced his opponents in silence, with unbreakable resolution.

The newspaper headline the next day announced that the Homeless Avenger had been slain in the subway.

The Homeless Avenger incident was one of the last in a series of events that brought Adrian Chase’s career as the Vigilante to an end. After allowing a police officer to fall to his death, Chase’s mind and dedication to his role as the Vigilante was slowly eroding. He found himself becoming nothing more than a costumed killer.

After escaping the authorities one final time, and apparently killing a police detective that he knew back when he was a District Attorney, Adrian Chase committed suicide in order to stop himself from becoming everything he hated.

The Homeless Avenger was deeply commited to return their dignity to the homeless, always saying that he loved them. Even an attempt to steal one of them will recieve a lethal answer. His cause was noble indeed, as few people stand to defend the homeless, but his methods were brutal.

(It’s possible that the Avenger was himself a homeless person who has suffered too much injustice, but I digress).

The Avenger also defended that the homeless world was only theirs, and he followed the path until its tragical (but logical) consequence. Facing alone a horde of thugss, he died defending the homeless people after refusing Vigilante’s help.

(After KOing two thugs to save an old homeless).
Homeless person: “You did that… to save me ?”
Homeless Avenger: “No, I did it to show them a lesson : that another human being could be more savage than them”.
(Grabs one of the thug’s knife and kills them).
Homeless Avenger: “And I do that for you, my friend, they wanted to steal something more valuable than your material possessions. They tried to steal your dignity. For that, I give you their blood”. 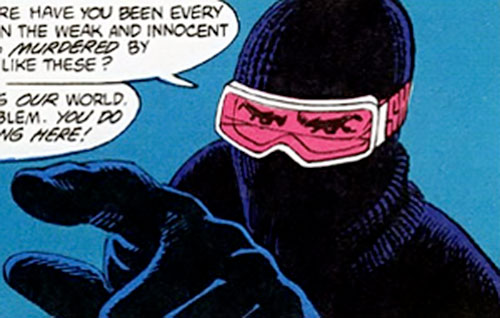