This specific character is a version of the protagonist of a 1921 novelette about a soldier with cybernetic eyes that can see electricity.

Jean Lebris is a fit, well-trained military officer with extensive combat experience. He’s also a remarkable brawler, capable of taking on multiple tough guys with just his dukes and winning.

Lebris has completely lost his eyes, and lacks a normal sense of sight. But his cybernetic implants allow him to see electricity.

As such he cannot see the surface of things, the appearance of people, or electrically neutral objects. As an example of the latter, a man suspended to a rope will look like he’s flying, since the rope will not register to electric vision.

However electric vision allows for clearly seeing people and electrical currents in a way reminiscent of cinematic depictions of thermal vision, such as the one used by the Predator aliens. Lebris can clearly see the nervous system of most life forms (in fact that’s probably the only way he can see them now). That works even in pitch darkness, or through visual clutter and many forms of cover.

Vegetation is also visible (especially if there’s sap) though it is dimmer. And Lebris can easily perceive most invisible creatures, such as Sarvants.

Unlike with his literary inspiration, this version of Lebris has something akin to a super-power. He will likely quickly learn to overcome many of the problems they pose.

Depicting him as an early Daredevil learning to use his radar sense will likely work. There are clear weaknesses to his senses an ordinary person doesn’t have, but his power compensates for that in most cases.

Without going into the whole Brigade Chimérique mythos, the key players in the origin sequence of the Rigged Man are :

Us All is the setting’s equivalent of the Bolshevik Party . They took power in Russia after the 1917 Revolution. Their ideology is a sort of transcendental Communism, where the only true superhuman power is the devotion of the People to the collective mindset taught by Us All.

The anonymous, masked leaders of Us All are thought to be a collection of mad scientists. In particular, Doctor Moreau  is strongly suspected of being the main Us All leadership council member.

Us All is based on the very influential 1920 dystopia by Ievgueni Zamiatine , translated into English as We .

Having the historical writers appear in La Brigade Chimérique as the chroniclers of their character’s exploits is common, and mimics a common literary trope of that era. 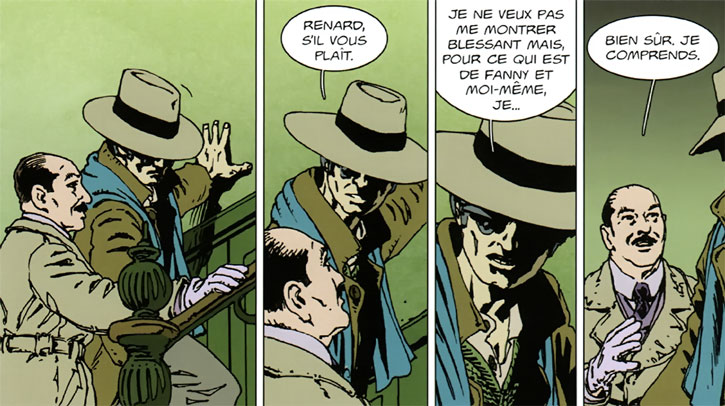 Polish-French genius Dr. Marie Curie  is even more important in this setting than in the real world. She is probably the world’s greatest expert in super-science. She is undeniably the greatest expert in radioactivity – which is even more mysterious and full of quasi-magical potential than in 1950s movies and 1960s super-hero stories.

Dr. Curie is referred to in popular fiction as the Radium Queen. But her involvement in super-science adventures is even more personal than most hacks writing about her imagine.

Léo Saint-Clair is a gentleman-vigilante from the turn of the century. He’s a major but elusive figure in Paris, wielding great quasi-official influence.

Though in English nyctalopia is being night-blind, in French it means an abnormally good level of night vision. His code name thus means “the man who sees in the dead of night”. His eyes were altered by an accident, and his artificial heart gives him incredible strength and vitality.

The Nyctalope starred in period pulp novels by Jean de la Hire . In La Brigade Chimérique he tends to embody the rise and fall of French genre literature, matching its historical evolutions.

Jean Lebris served during World War One with the 146th Infantry Regiment (traditional motto: “Die with a smile”).

In late May, 1918 he was part of the third battle at the Chemin des Dames. This German offensive was eventually stopped during the second Battle of the Marne . The assault was marked by unprecedented artillery fire, and Capitaine Lebris lost his eyes to a bursting shell. 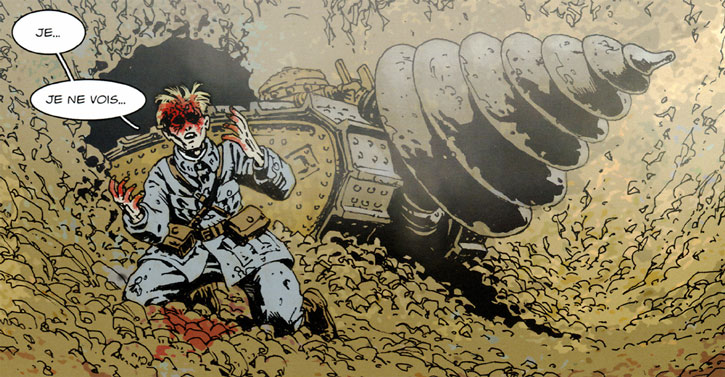 Unidentified foreign agents were present at the battle in a secret underground borer vehicle. These agents kidnapped the blind French officer to experiment with a strange ophthalmological contraption. These unidentified persons are thought by both Capitaine Lebris and Marie Curie to have been working for Us All.

It is implied that the experiences of Capitaine Lebris, and perhaps his escape, are similar to those of the original literary character. Here again, see our other Rigged Man profile. As he escaped, he had recently been implanted with a sort of “VR helmet” plugged into his optic nerves and giving him “electric vision”.

In unclear circumstance, Lebris ended up in the forest of Montmorency . He was struggling to master his new and missing senses and did not know where and when he was. As he feared, locals reacted in fear to his artificial-looking head.

He lived in hiding in the forest, sneaking into nearby villages to steal what he needed to survive. A peasant who ran into him called him “the Rigged Man”, perhaps to make it easier to sell the story to journalists.

The Nyctalope decided to capture the Rigged Man. He had correctly deduced that his quarry likely was a soldier turned into a superhuman by the war. Such cases had happened before, and thus Saint-Clair contacted Dr. Marie Skłodowska-Curie. The “Radium Queen” was reputed for her understanding of such cases.

With Dr. Curie’s decisive help, Saint-Clair and his men captured Lebris. They also ended up catching writer Maurice Renard, who had been attempting to locate the Rigged Man on his own.

Thus, by the 12th of January, 1919, Capitaine Lebris was back in Paris, at Dr. Curie’s Radium Institute. Maurice Renard volunteered to help Lebris return to civilian life. That was both out of genuine admiration and because he needed something exciting to chronicle for the newspapers. 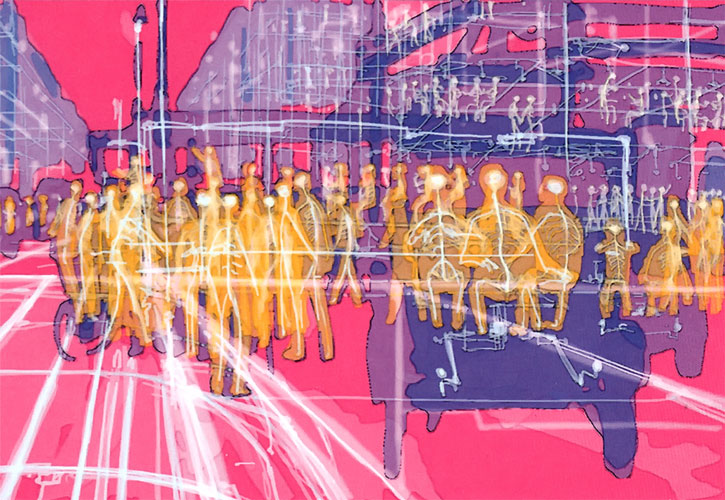 Renard helped reunite Lebris with his fiancée Fanny Lecuyer – which the disfigured Lebris dreaded. Lebris rapidly realised that something was very, very wrong with Lecuyer, and investigated. His unique vision allowed him to quickly detect otherwise invisible creatures crawling in Lecuyer’s basement.

As it happened, Maurice Renard knew about these visitors from another planet, called the Sarvants. In 1912 he had written the definitive book on the first known contact with Sarvants, The Blue Peril .

Renard was thus able to quickly summon a super-science raid by the Nyctalope, his men and Marie Curie to take on the Sarvants and free Fanny and her neighbours.

Though the raid would have been a partial failure, Dr. Curie revealed that she was the secret master of France’s nigh-mythical wartime super-heroes the Chimera Brigade. This too, the Nyctalope had suspected all along. Her four agents destroyed the Sarvants before they could flee and enslave more Humans elsewhere.

Thus by mid-January, 1919 the Rigged Man was back in Paris, connected, and with widely-read articles by Maurice Renard in the Excelsior celebrating him as a national hero for his service and subsequent adventures. Though the freed Fanny Lecuyer reacted in horror upon seeing Lebris, it was hoped that she would overcome her shock.

Lebris, Curie and the Nyctalope went on to free more Parisians in the thrall of the Sarvants – their plight invisible to all but the Rigged Man.

However, Lebris doesn’t seem to be present during the 1938-1939 events chronicled in La Brigade Chimérique.

(One of the last panels of the graphic novel implies that the contemporary photographer Gyula Halász (better known as Brassaï ) had a more sophisticated version of the electric eyes, similar to those depicted in the real Maurice Renard’s novel. This is presumably just a little joke, since the work that made Brassaï famous were night-time photographs of Paris.)

Lebris’ skull is covered by a metallic, plated apparatus. To 1910s onlooker it looks really odd. But to a modern viewer it looks like a large retrotech VR helmet. He has a pale, greyish skin and is of average height, but visibly in good shape.

During the graphic novel he dresses like middle-class Parisian participating to some sort of outdoors sports event, with a trench coat and a large hat to help hide his nature.

Capitaine Lebris is a calm, rational, courageous patriot and man of action. He did an admirable job at overcoming his bizarre fate to resume a form of service.

The events in the graphic novel take place within less than a week. Yet he goes from struggling to understand his inhuman senses and dealing with his handicaps to being a decisive protector of Paris, helping alien mind control victims as only the Rigged Man can.

Lebris believes in duty above all else, and faces it resolutely.

Source of Character: L‘Homme Truqué (a 2013 graphic novel in the same setting as the La Brigade Chimérique series), as inspired by Maurice Renard’s 1921 short novel of the same name.

Writeup completed on the 2nd of February, 2015. 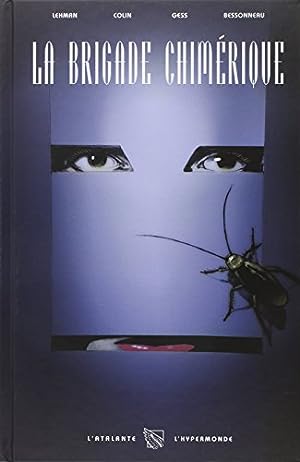 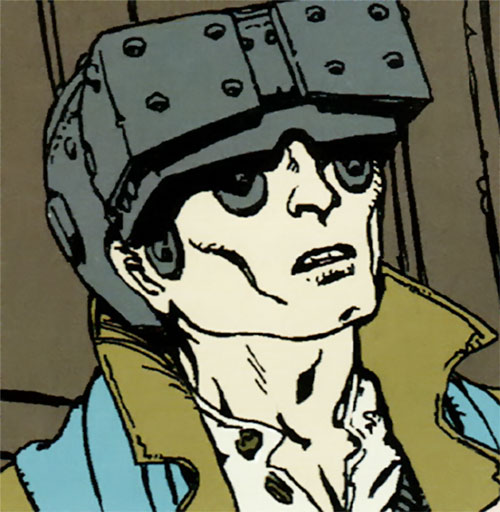 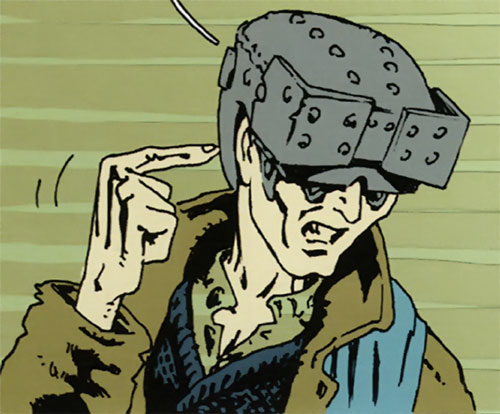 Marie Curie, the Rigged Man and the Nyctalope, in the style of Brassaï’s early photographs : 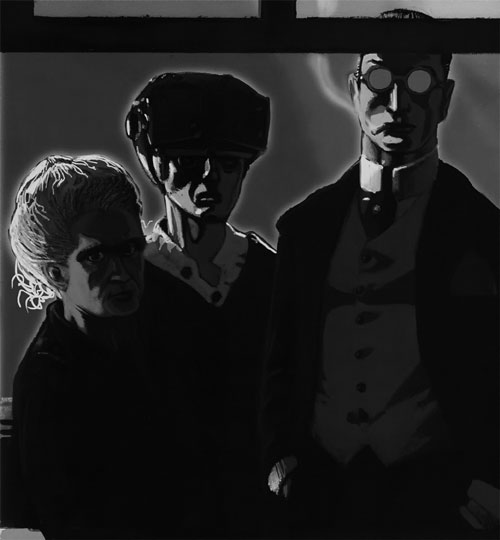