When asked about her origin, Thekla “Lizabeth” Stratiosa quipped “I was bitten by a radioactive professional women’s tennis player.”

(This is a reference to Martina Navrátilová , the reigning champ in women’s tennis during the 1980s. She also was one of the few out women with high visibility during that decades, though not by choice. That was 16 years before Ellen Degeneres coming out, for context — Ed.)

She is apparently a long-time resident of Detroit’s “Cass Corridor”, which (judging by the comics) is a somewhat seedy but colorful inner city neighborhood with a large population of punks, college students, queer folks, and various fringe types.

When a corrupt businessman was burning down old houses in the neighborhood as part of a land development scheme, Lizabeth took it upon herself to investigate.

Her friends teasingly labeled her a superhero, and stuck her with the nickname “Homo Gal”. It was during this case that she met Mike Guinness (aka Cool Jerk), and the two became fast friends, roommates, and partners in crimefighting.

Lizabeth is an average-looking woman of Greek descent. She’s very tall with a slender, wiry build. Her black hair is shaved on the sides and long on top, often worn in a ponytail.

She dresses in typical punk/grunge fashion of the times. Flannel shirts, bandanas, worn-out blue jeans, etc. She sports multiple piercings in her ears, and one in her nose.

Lizabeth is a staunch leftist, vocal and unwavering in her support of the rights of womyn, gays, and other minorities. Though normally friendly and easy-going, her temper quickly boils over when confronted with repression of any kind, or violence against innocents.

She considers herself more of an activist than a crimefighter per se, and really hates it when people tease her about being a “superhero”.

In combat, Homo Gal is reckless to the point of near-suicide. She thinks nothing of jumping onto a speeding car, or taking on a group of armed thugs with nothing but her fists. Her vast Hero Points  allow her to survive those tactics, however.

“I’m supposed to be petite, demure, and in my kitchen making pot roast for my loving husband… BUT I AIN’T !”

“NOBODY calls me a dyke… except maybe another dyke.”

Cool Jerk and Homo Gal pretty much stick to their own neighborhood, dealing with local problems, so it’s unlikely that they have had much contact with the larger superhero community. It might be amusing to have them get into a “turf war” with the Justice League during the period when the JLA was based in Detroit.

Cool Jerk would no doubt be awestruck if he ever met one of the more “legendary” heroes, while Homo Gal would probably just dismiss them as tools of the fascist establishment. On the other hand, she might get along fairly well with the more “working class hero” types like Green Arrow (Ollie Queen), The Question, Black Lightning, or Ragman.

Drawbacks:
SID of ultra-conservatives and other regressive types, Public Identity. 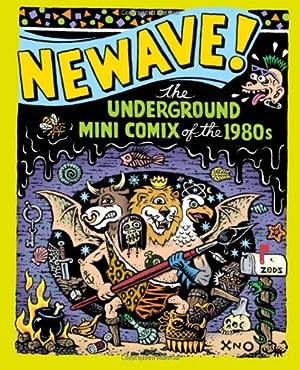 Books about minicomics and underground comics