Honey Lemon is both a cinematic super-agent and a physicist.

She has an endless array of skills, from engineering to half-dozen martial arts styles, and from seduction to acrobatics. Anything that a movie super-spy can do, Honey Lemon can do whilst giggling – and she has her scientific knowledge on top of that. She is also quite agile and graceful.

Her signature invention is her “Power Purse” (or “Nano-Purse”). This is actually an hyperstructure containing multiple wormholes. This allows Honey Lemon to reach into other dimensions while rummaging in her purse, which she primarily uses as extradimensional  storage for objects and materials shrunk using Pym Particles (so they can fit through her small purse’s opening).

However, she can only produce one device at once.

The amount of stuff she’s got in there is also seemingly endless. No matter how absurdly specific, Honey Lemon will always have the right equipment at hand. Given her resourcefulness and scientific knowledge (plus Hiro Takachiro’s skills), this is a tremendous asset for Big Hero Six.

She even has vehicles as large as a Humvee in there, and frequently produces high-performance jetpacks. Honey Lemon once produced a sphere of metallic liquid that could wrap itself around Go Go Tomago’s body and act as super body armour, albeit for a limited time.

The purse was originally described as mystical, but was later retconned as technological. However, it does include quasi-mystical stuff, such as synthetised raw necroplasmic energy (which she used to make an astral projection solid).

She also occasionally summons small animé-style  creatures to attack her opponents, but these are presumably robots. You could definitely use the stats and visuals from our Pokémon writeups, though.

In 2012, the purse was re-retconned as actually allowing her to find and grab already existing objects she needs, anywhere in space and perhaps time. For instance, when she needed a hypothetical energy conversion blaster — and who doesn’t — the purse opened a wormhole to Reed Richards’ lab so she could grab one.

Since this contradicts official descriptions that were published not too long before, that was presumably a continuity mistake.

As a young physicist, Ms. Miyazaki was recruited by Japanese intelligence agency Naikaku Jōhō Chōsashitsu (“Naichō” for short) as a technologist and potential field agent. The R&D team she was with developed many surveillance devices. But their big achievement was a small scale wormhole technology, which Miyazaki disguised as a woman’s purse so it could be used in the field. 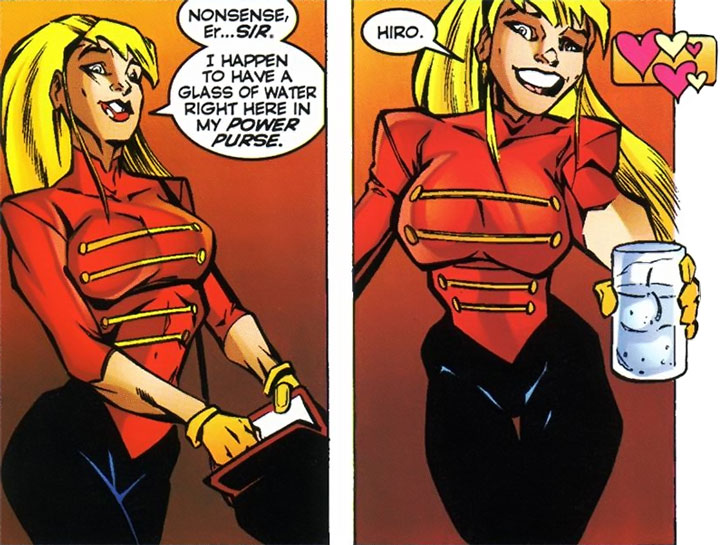 At this point, the Giri Industrial Corporation, a shadowy quasi-public Japanese consortium, had begun recruiting agents to create the Big Hero Six team – the official Japanese super-team. Miyazaki applied, and with Naichō’s backing was recruited in 1998.

Since BH6 agents needed code-names, she called herself “Honey Lemon” after her favourite TV show.

Honey Lemon has been a mainstay of the team ever since.

Aiko has permanently changed the colour of her eyes and hair. There’s a small lemon tattoo near her navel, and a larger Hello Kitty tattoo on the small of her back. She often uses red eyeshadow.

When out of uniform, she dresses like a party girl and has plenty of cute accessories, up to and including headbands with prominent plastic cat ears or pink fur shoulderpads.

Honey Lemon is the kindest, most helpful Big Hero Six member. For some years she had a running feud with Go-Go Tomago, but they eventually became friends. She is a big fan of Sunfire (Shiro Yashida), and became an agent to emulate him. 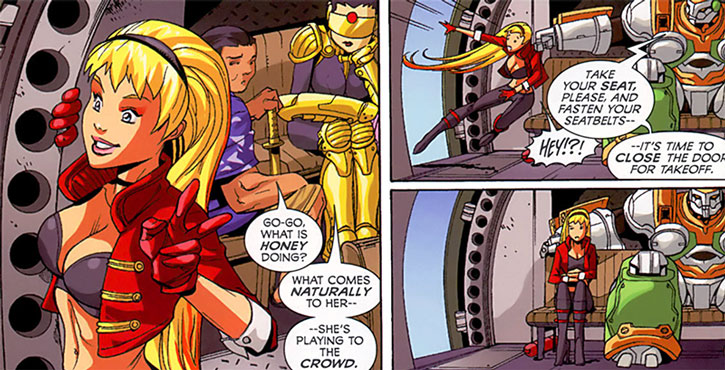 Aiko often acts in a twee and flirtatious manner, which is very effective at making people underestimate her. She’s got her vain party girl act down pat.

In the 2008 Big Hero Six series her personality was oddly retconned to that of a mean popular girl, though that didn’t stick and went away before the mini-series was over (?).

“Go Go Tomago, please. Can you not show the least bit of professionalism ?”

Equipment:
POWER PURSE [BODY 04, Fabricate: 15, Bonus: all Artefacts receive a Special +8 Duration Bonus though the total duration APs still cannot exceed her APs of Fabricate ; Limitation: can only maintain one Artefact or Doodad at a time]. 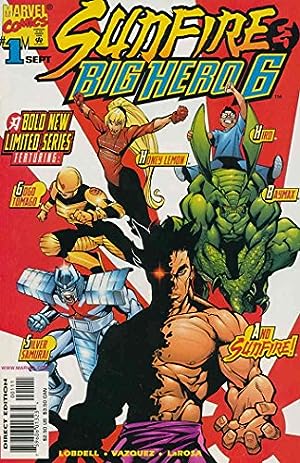 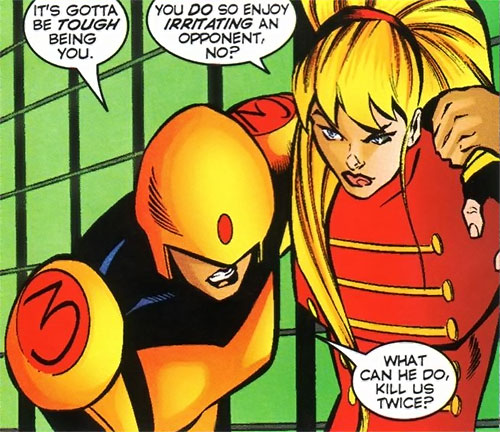 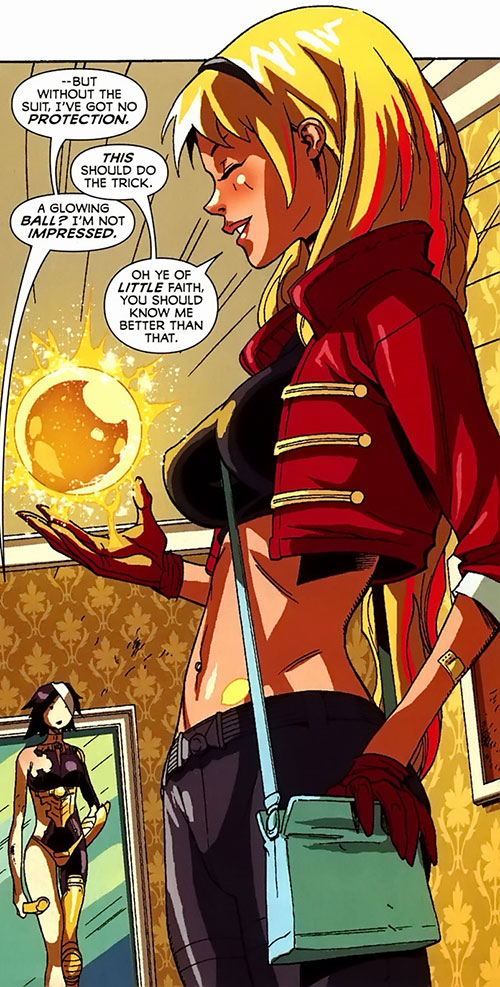