Hon may be young, but he has shown ineradicable capacity as a swordsman. as a result, he is considered a rising star in the Seung Family Dojo. He once viewed Han Myong, the dojo master and Hwang, the star pupil and successor, as his heroes. But Yun-seong has now grown adept enough at swordplay that he now sees them as goals to surpass.

His fighting style is fluid and includes a lot of movement, but could not be called acrobatic. In particular he is very adept at delivering kicks and has excellent footwork and balance.

Yunsung was well known in the dojo for his swordsmanship, even by his seniors. Hwang Sung Kyung, whom Yunsung had idolized as a child, was no longer his hero, but a goal to surpass. Yunsung wished to challenge Hwang to a duel.

One day, news reached the Seung Dojo that Hwang was returning from his long journey. Yunsung saw his opportunity to force Hwang to acknowledge his fighting skills. He even felt he had a shot at proving to be actually stronger than Hwang!

Hwang, however, did not take Yunsung’s challenge. He had other priorities, such as rejoining the military to help defend his country from the impending invasion by Japan.

Seung Mina, the master’s daughter, saw the brooding young man and handed him a single-handed sword. The weapon she handed to Yunsung was a Seung family heirloom. According to legend, it possessed the ability to reflect the deepest thoughts of those who held the blade.

That night Yunsung studied the image of himself in the sword and reflected upon what had just happened. He eventually understood the foolishness of challenging someone for personal reasons when the country was in such peril. But what could Yunsung do to make Hwang acknowledge him?

He then realized that if he could obtain the Sword of Salvation that Hwang had failed to find, Hwang would be forced to recognize Yunsung’s talents and respect him. Challenging Hwang to a duel would have to wait. Once Yunsung made his decision, he could not stay put for long. He immediately packed his belongings and left the dojo.

While searching for the Sword of Salvation, Yunsung heard rumors that it was, in fact, a cursed sword. Mixed emotions ran through him. During his travels, he heard that a city had been destroyed in a conflict with Soul Edge. He also heard that a group of orphans were said to be living together outside the city.

He visited these children, and they greeted him cheerily. All except for one. He found a girl named Talim and a boy sick in bed. Both of whom seemed to know of Soul Edge. He took up residence there in order to gather information.

Talim looked at him sternly and warned him about Soul Edge Yunsung was taken aback, but quickly recovered his spirits. The sick boy, the children’s leader, gave a brief, startled look upon hearing the name “Soul Edge.” Yunsung waited in the village for an opportunity to question the boy. While the children grew fond of Yunsung, the boy avoided him.

Talim devoted herself to treating the boy, but the results were not promising. Seeing the look of sorrow that appeared on her face, Yunsung felt that he had to do something, too. He spoke to her every chance he got, and the disheartened Talim recovered a little of her smile.

Seeing the boy’s condition worsen, Talim decided to try a more drastic treatment. She said that she was willing to accept the risk, but the boy refused as he vented his anguish. Yunsung stopped the boy from arguing with Talim and the other children were able to convince him that it was indeed the only way.

Once they were alone together the boy looked sadly at Yunsung and began to tell the story of his past. Yunsung listened silently.

The boy’s father had been a noble, who had obtained a fragment of Soul Edge. In an effort to draw out the power hidden within the shard, he had performed experiments on his own son. Sensing the danger, the neighboring countries attacked. The lord went mad and began killing without prejudice. The boy’s father was killed and everything ended.

The boy explained that the other children were also going to be used in experiments, but was able to save them. When he finished Yunsung stood up and drew his blade. He explained that the sword supposedly reflected what was in a person’s heart.

The boy was silent for a while, before quietly saying, “Thank you.” After the long ritual the boy recovered. Talim seemed puzzled and one day suddenly left on a journey without informing anyone or explaining where she was going. Yunsung, still wanting to ask her things, bid his farewells.

The boy then told Yunsung everything he knew about the cursed sword and he nodded at the boy’s words. Yunsung knew that a knight in azure armour was said to be the wielder of Soul Edge and he was ravaging the lands to the west. When Yunsung reached the end of his journey his true strength would be tested. Knowing this, he set his eyes on the path before him.

Yun-Seong later caught up with Talim, the girl he had met in Asia Minor.

When they saw a temple in Egypt that had been demolished, he knew the power of Soul Edge was real. When he crossed paths with his kinswoman Mi-Na, however, she was of a different opinion. She had definitively decided that the blade was evil and would only bring ruin to their country.

It was just a matter of time before she would drag him back home with her, and so he slipped away once Mi-Na and Talim were asleep.

Yun-Seong headed west and soon neared Ostrheinsburg, the stronghold of the Azure Knight. There he sought out the solitary warrior who had gone into the ruined castle and managed to return alive. Incredibly, the warrior turned out the be Hwang, the very same swordsman whom he had idolized growing up. Unable to mask his surprise Yun-Seong listened to Hwang’s story.

Hwang had been tasked three times with finding Soul Edge and had instead tried to destroy it. Now even Hwang, who Yun-Seong respected more than any other man, believed the sword was evil. The knowledge shook Yun-Seong to the core, but his own opinion would not be swayed.

When Hwang saw that Yun-Seong remained as determined as ever he told him to go and see for himself. With courage and conviction he had never before known, Yun-Seong turned toward Ostrheinsburg. He would have faith in his own strength and seek his destiny!

Yun-seong is a typical hot headed and impatient young warrior. Although he certainly means well and very passionately wants to save his country and of course become a great warrior in the process he has consistently ignored the advice of several people with first hand experience of just how truly evil the Soul Edge is.

He tends to come off as brash and head strong even when compared to someone similarly as immature as Mi-na.

Yun-seong: “What do you see ? The figure of a demon filled with a twisted power ? Somehow, I don’t think so. Don’t give up before the end. You made the right decision.”
Sick boy: “Thank you. I’ll tell you everything I know about that evil sword. But I want you to promise me that you’ll make sure with your own eyes that the sword is really what you think you seek. I trust you.”

Seeking the Soul Edge could have easily sent him time travelling — although truth be told to add any real depth to the character in any storyline he would have to come to terms with just how evil the Soul Edge is and seek to destroy it rather than try to harness its power.

Equipment:
White Storm [BODY 05, EV 05, R#00]. A treasure of the Seung family, (yes, Mi-na) it is said to show the reflection of one’s heart in the blade. (Note: This is never actually demonstrated in any way shape or form in the story line so I didn’t even try to speculate on the stats.) It was leant to Yun-seong by Seung Mi-na and is considered master work and thus has slightly higher stats. 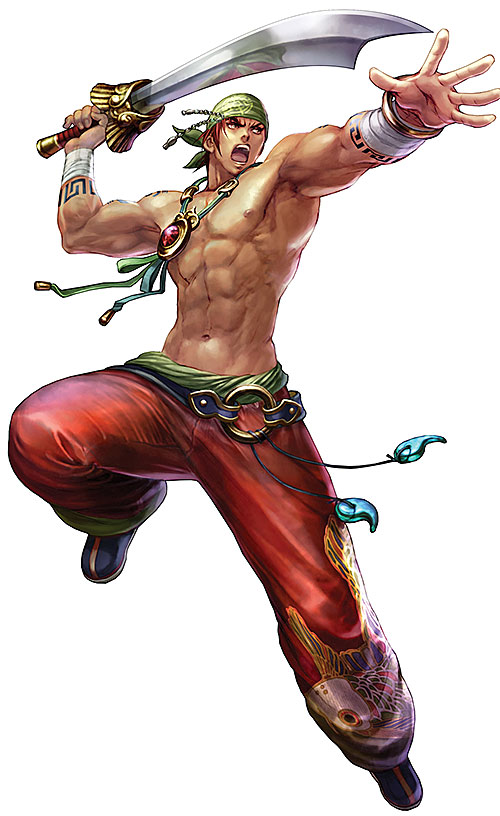