His mystic hooded cloak grants him the ability to become completely invisible as long as he holds his breath. At one point he began chanting and shooting bolts of lightning against his enemies, but that has not been seen since. This is presumed to be the effect of remaining mystical energies derived from the previous owner.

The other useful piece of equipment, besides his guns, are the mystical leather boots he wears. These enable him to walk in the air, and have no apparent limitations to their effect.

Supporting a pregnant girlfriend, a demanding mistress, and an institutionalized mother, small time crook and supervillain enthusiast Parker Robbins could barely make ends meet. With the help of his loyal cousin, recovering drug addict John King, Parker broke into a Brooklyn warehouse. They were hoping to get their hands on a rumored “major shipment”.

Unfortunately, the two thieves found nothing of value inside. Instead, they encountered an otherworldly creature. Shooting this enraged demon before it could kill John, Parker then took the deceased monster’s expensive-looking boots and hooded cloak. He hoped to sell them on the black market.

Later that night, running from a roving street gang that stole his shoes, Parker had no choice but to don the strange boots he stole earlier that evening. The young hoodlum soon learned that this mystical footwear allows him to literally walk on air.

Then during a disagreement, where John punched Parker in his stomach, they discovered that the stolen cloak could turn Parker invisible as long as he held his breath.

John King tried to convince his younger cousin to use these newfound powers to steal an upcoming shipment of black-market diamonds. Unbeknownst to Parker and John, the importer of these so-called “blood stones” was actually Dennis “The Golem” Golembuski. The Golem was an underboss in the Kingpin’s vast criminal empire.

The Golem was fed up with rogue super-villains interfering with his business. He hired three freelance mercenaries, the Shocker, Jack O’lantern and the Constrictor, to protect the delivery of his diamonds.

Meanwhile, rookie FBI Special Agents Victor Infante and Wyatt Sobel were hoping to restore national confidence in there beloved Bureau. Their plan was to publicly take down one of the many “masks” terrorizing New York City.

The heist went terribly wrong. Parker was attacked by several of the Golem’s super-powered mercenaries. To make matters worse, during his escape, Parker accidentally shot an NYPD officer, while John was apprehended by authorities. Parker still got away with half of the diamonds, worth in total 1.5 million dollars.

Dubbed “The Hood,” Parker was now the fugitive most wanted by FBI Special Agents Infante and Sobel.

The FBI even created a wanted poster of him reading: “FBI Ten Most Wanted Fugitive – Wanted for attempted murder while masked/disguised, assaulting a peace officer; unlawful flight. Name Unknown. (Police Artist’s Sketch) Caution. Considered armed and Dangerous and an escape risk. If you have any information concerning this person, please contact you local FBI office or the nearest U.S. embassy or consulate. Reward 1 million dollars.”

Parker attempted to break his loyal cousin out of jail, and discovered strange new powers in the process. But John was reluctant to escape. Instead, he begged Parker to hock their stolen diamonds and hire an expensive attorney for his trial.” Unfortunately, the Golem had already warned every fence in town to be on the lookout for anyone to peddle his missing gems.

Unable to hock the too-hot stolen diamonds, Parker offered to return the Golem’s property for a small “finder’s fee.” The Golem claimed to agree to this proposal, but secretly ordered his underlings to murder the Hood. Meanwhile, an anonymous source informed the FBI of the location where Parker planned to make his trade.

Parker met the Golem’s henchman, a supervillain named Madam Rapier, on Coney Island to make the trade. All the while the trade was being supervised by Golem’s other three superpowered henchmen from afar. Rapier herself tried to kill Parker, but failed. Parker then made Rapier put on a copy of his cloak, which he just brought on his way to the trade from a costume store.

The cops arrived, saw the Hood disappear, spotted the Rapier, now looking like the Hood, and gunned her down. The FBI realized that they had killed the wrong person, a woman, but anyway, in order to save face, publicly declared the Hood to have been killed in a firefight.

The Hood then handed over the diamonds to the remaining henchmen and told them that their business was concluded. The three supervillains, somewhat impressed by the Hood’s actions, let him leave in peace.

John cleared his name and was released from prison when he told the law that the Hood was a woman, the same woman who had just been killed. Parker and John got home to celebrate with his girlfriend.

Unfortunately, in the aftermath, the police officer who was accidentally shot by the Hood died. His widow, a Stark scientist, becomes the vigilante White Fang, dedicated to bringing down the Hood. The demonic creature that Parker stole his equipment from was resurrected while uttering the words ’Parker‘.

And then, it was revealed that Madam Rapier was the daughter of the Golem – who vowed revenge on the Hood. Thus, it looks as if the adventures of the Hood are far from over.

Parker is a young man, by some said to be handsome. As the Hood, he wears brown or blue trousers, black or grey shirt with brown arm bands on top, the mystical leather cowboy boots with a metal star on the sides and a wine-red hooded cloak with the same metal stars on the front. His visage is covered in shadow by his garment. All in all he looks pretty mysterious.

Often, while performing a heist or the like the glimmer of two pistols can be seen in the shadow of the hood.

Parker is an amoral small-time crook who lies and threaten those weaker than himself. He does, however, care for his mother. He wants to get money to get her into a better hospital and to provide for his pregnant girlfriend Sarah.

He is willing to work in smaller operations, but won’t work with terrorist organizations such as Hydra. Parker pretty much steals anything he can get his hands on. He’s so poor that he even steals the clothes of his victims. Besides his family, stolen money also go to a prostitute he meets on a regular basis.

As the Hood, Parker lives his childhood dreams of a supervillain. He’s something of a supervillain fanboy himself. He is most willing to beat people up, but he won’t easily murder anyone, especially not the police.

Although they sometimes physically fight, his cousin John is his best friends with whom he shares all sorrows. This is not practical since John is not a trustworthy fellow. Parker will attempt to rescue or help anyone he considers to be family, even if he risks his life in the business.

“Holy… I… I can fuckin’ fly. Heh.” (discovering his boots abilities)

The Hood: “Chill. I’ve got no beef with you guys. I… I just want everything back the way it was. Here, I’ll even let you take these rocks back to your boss. Just tell him to leave me the fuck alone.” (having just set them all up)
The Constrictor: “Jesus.”
The Shocker: “Yeah, that kid’s gonna go far in this business…”

John: “Wait a second, if the stupid boots make you fly, a goddamn cape should do something even better, right ? Maybe it makes you bulletproof ?”
Parker: “Brilliant theory, Reed Richards… considering I shot the thing that was wearing it.”

John: “What are you, opening a fuckin’ Men’s Warehouse ?”(Park is stealing clothes again) “The cops are probably on their way — let’s go !”
Parker: “I just want his boots and this cloak-thing, John. There’s no way I’m leaving here empty-handed… not after all this.”

The Hood is a really small-time crook. He’d make an excellent Batman villain, but given his mystical origin he might be used in some more occult setting as well.

Source of Character: The Hood mini-series, by Marvel MAX Comics. 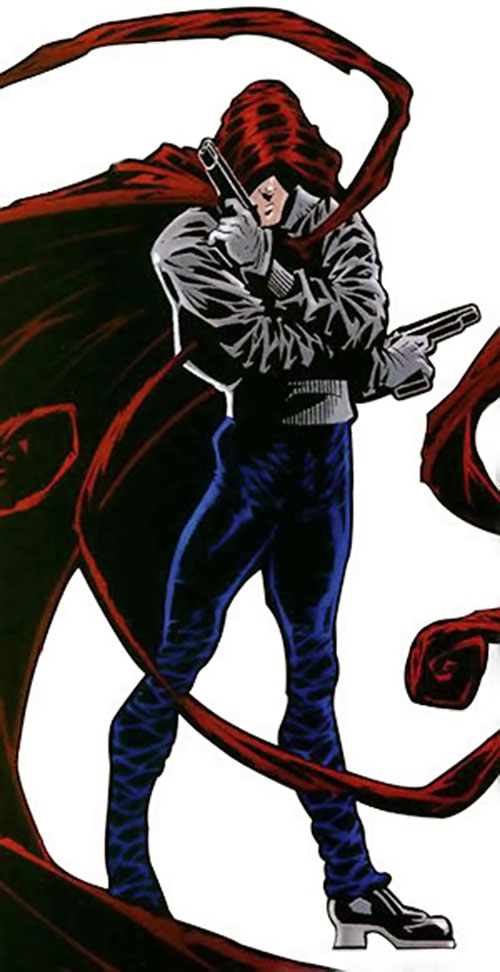 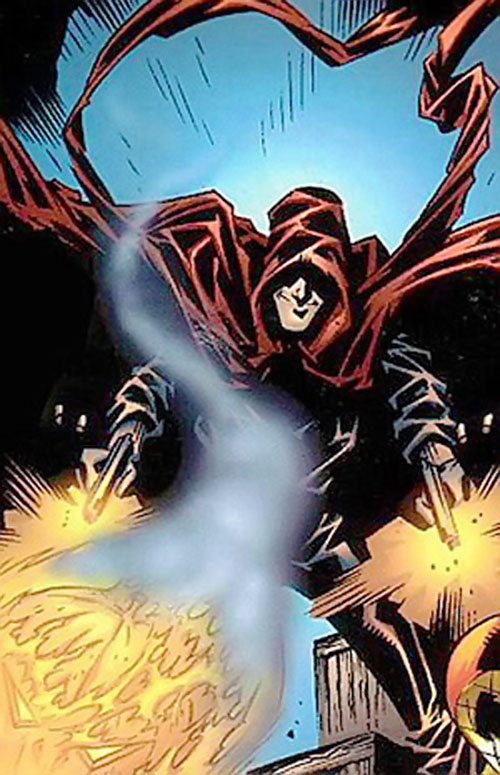 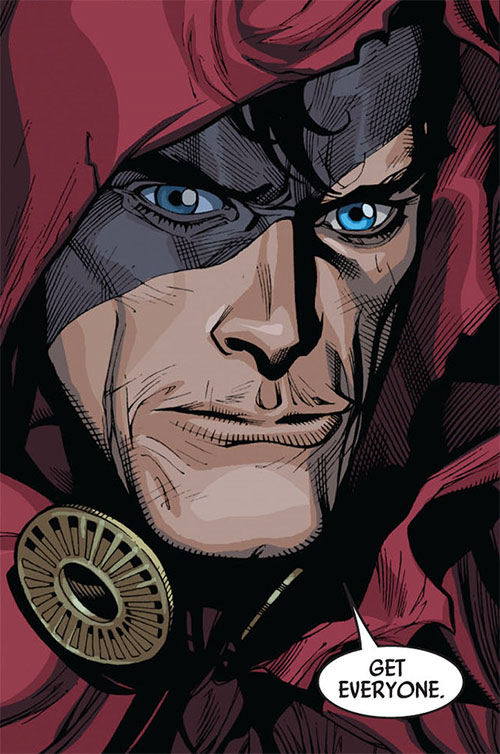 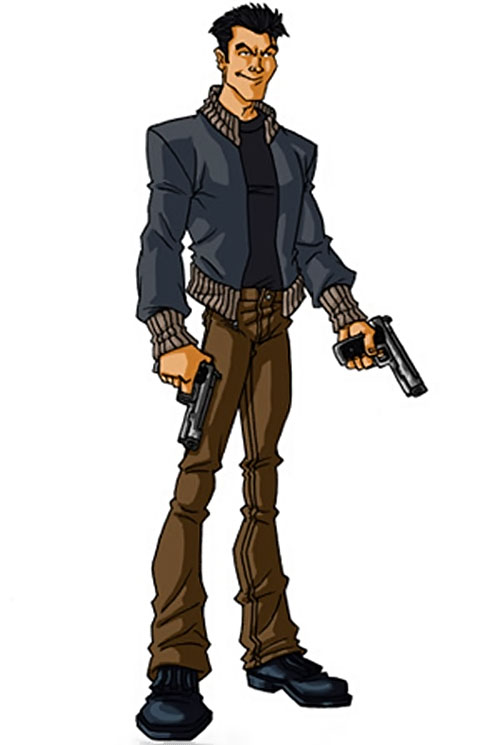 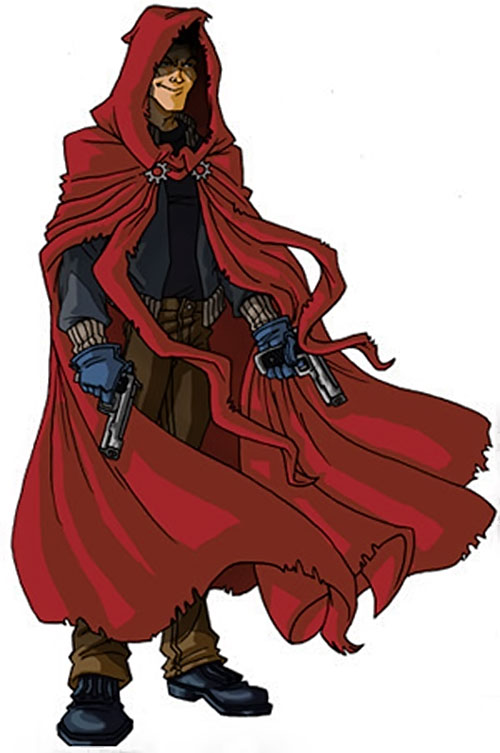 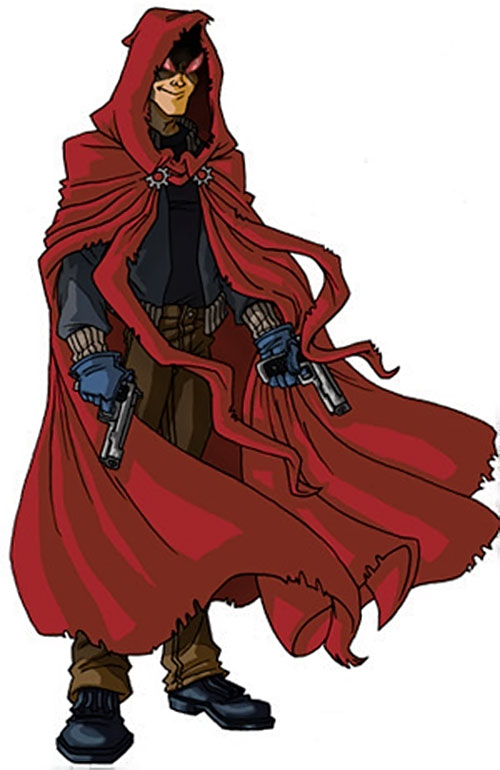