Though the identity of The Hooded Justice was never openly revealed, it’s hinted strongly to have been Rolf Muller.

Born in Kiel, Germany in the year 1917, Rolf Muller and his parents Henrik and Greta emigrated to America in 1919. They eventually settled in Macon, Georgia.

The Muller’s marriage was an unhappy one. Greta was an alcoholic, and Henrik, disgusted by her habit, beat her frequently. In 1930, 13-year-old Rolf, already 6’2” and 210lbs, brutally beat his father in reatliation for his abuse.

This was apparently the last straw for Henrik, who shortly afterward ran off with a younger woman.

In 1932, Rolf ran away from home and joined Sackson and Shanley’s circus, where he was billed as “Rolf the European Powerhouse”.

Shortly after joining, he appears to have begun an affair with Frank Burrows, a fellow circus performer. One Sackson and Shanley employee would describe an incident wherein Burrow and Muller spent hours in the wardrobe tent.

Muller emerged, full of rage, seized a hot poker and furiously began to burn his arms and legs before collapsing in tears. After this, he wore a full body stocking when appearing in public, to cover the scars.

Muller apparently joined the Ku Klax Klan at some point prior to 1933. He and Burrows, along with three other Klan members, were acquitted of the death of a young black man and his wife. The young man was killed by what investigators assumed to be an unknown weapon or tool. After all, what human could possibly be strong enough to break a man’s neck with his bare hands?

In 1938, Muller left Sackon and Shanley’s circus. He joined the NYC Shriner’s Circus, though he logged frequent absences over his career.

Sixteen days after he joined the Shriner’s Circus, a young couple in Queens, New York were attacked by a gang of 3 men, armed with guns. They robbed them, physically assaulted the man, and threatened to rape the woman.

Suddenly a mysterious figure with something over its face leapt down from the alleyway above, disarmed the gang members barehanded and beat them so badly that they were hospitalized, with one permanently losing the use of his legs.

One week later, the strange figure foiled a supermarket robbery, beating one of the robbers with such savagery that the others were only too happy to surrender. This time the description was more detailed, and the papers’ headlines simply read: “Hooded Justice”.

Hooded Justice’s example inspired other costumed adventurers, and in 1939 two of them, Captain Metropolis and Silk Spectre, formed a group known as the Minutemen.

Hooded Justice apparently hooked up with Captain Metropolis shortly after the Minutemen formed. On the advice of the group’s agent, Laurence Schexnayder, Silk Spectre (aka Sally Jupiter) pretended to be Justice’s girlfriend. This ruse worked so well that it seems to have fooled most everyone else on the team.

In an interview in 1939, Justice made public statements supporting Hitler’s Third Reich. This earned the group some controversy, and the enmity of a fellow Minuteman – the Jewish Ursula Zandt, aka The Silhouette. Schexnayder was able to sweep this under the table, however.

In 1940, when Sally Jupiter seemed to be taking a long time to rejoin the group after a meeting, Hooded Justice went to check up on her. He walked in on the Comedian attempting to rape her. Livid, Justice beat the Comedian badly, only relenting when the Comedian made mocking allusion to Justice’s sadomasochism, causing his shame to overcome his rage.

After ordering the Comedian to leave, Justice coldly told the injured Sally to get up and cover herself.

Later that year, Justice broke his arm during a fight with the Screaming Skull and his thugs, and Muller mysteriously missed a month’s worth of performances.

With the advent of World War II, three of the Minutemen (Captain Metropolis, Dollar Bill and Mothman) went to war. Hooded Justice, having no public identity, couldn’t be drafted, and so stayed behind with the remaining members of the Minutemen, who fought domestic threats.

In 1949, the Minutemen disbanded, and Justice went back to solo work.

In 1954, when the HUAC called upon the country’s superheroes to unmask before one of their representatives, Justice thoroughly refused to reveal his identity to anyone. He disappeared, never to be heard from again. Rolf Muller (whose East German cousin had been captured while attempting to bug the office of the American attache) disappeared, as well.

A body tentatively identified as that of Rolf Muller was found with a bullet in its head in 1955. The Comedian would later strongly imply that he was responsible. If so, he too apparently believed that Muller was the Hooded Justice.

However, there is an interesting theory , based off of a single panel within the comic, that the Hooded Justice and Captain Metropolis faked their deaths, so that they could live in anonymity. If that’s the case, then they probably both died in Ozymandias’ fake alien invasion.

Hooded Justice is a huge and extremely muscular man of indeterminate age.

His costume consists of a bright red cape and trousers, a black shirt and hood, and a noose around his neck, with ropes around his wrists and ankles. It has visual connections to the circus, KKK imagery, and bondage.

Hooded Justice was quiet and brutish (though not unintelligent). He vented his rage and sadistic tendencies on criminals, often crippling or killing them. He regarded criminals as an undisciplined and perverse lot, and despised them for their weaknesses (as Muller despised his parents for their own failings).

His own addiction to sadomasochism thus seems to have been a deep source of shame.

Justice was openly racist, and at one point, went on record stating his approval of Hitler’s Third Reich.

His relationship with Captain Metropolis seems to have been rather rocky. As mentioned, Justice was heavily into S&M and often cheated on Metropolis with younger men who shared his tastes. The duo also had a bad habit of bickering in public like an old married couple.

However they apparently managed to keep their relationship secret from everyone except Laurence Schexnayder and Sally Jupiter.

Although he wasn’t, of course, romantically interested in the Silk Spectre, Justice seems to have at least been friendly with her. However, he was unwilling to touch the badly injured woman after the Comedian’s attack, even to help her up, and acted rather coldly toward her.

If he is Rolf Muller, this behavior could probably be explained by the whole situation being all too reminiscent of the incidents of abuse between his father and mother, and causing him to project the sheer rage he felt toward his father as a child upon the Comedian, and the disgust he felt toward his mother (for being a victim) upon the Silk Spectre.

After Justice beat the Comedian severely following his rape attempt, the pair shared a mutual hatred. This may well have led to the Comedian killing him in 1955.

Silk Spectre: “Boy ! Real photo sessions ! Do you think my hair will come out looking okay, H.J. ?”
Hooded Justice: “Frankly, Sally, I don’t go in for all this razzle-dazzle. I’d rather be on the streets doing my job.”

[Hooded Justice walks in on the Comedian attempting to rape Sally Jupiter]
Hooded Justice: “Sally ? What’s keeping you ? The others are all waiting to-”
[He sees them and his eyes fill with rage.]
Justice: “You vicious little son of a bitch…”
[Justice picks the Comedian up by his shirt-]
Comedian: “Hey, wait ! She wanted me to do it ! She…”
[-and breaks his nose !]
Justice: “You sick little bastard, I’m going to break your neck…”
[He slams his knee into the Comedian’s crotch.]
Comedian (wheezing painfully): “This is what you like, huh ? This is what gets you hot…”
[The rage flees Justice’s eyes, replaced by shock.]
Justice: “Get out.”
Comedian (still wheezing): Oh, sure. Sure, I’m going. but I got your number, see ? and one of these days the joke’s gonna be on you…”
Justice: “GET OUT !”
[As the Comedian leaves, Hooded Justice looks coldly down at the injured Sally Jupiter from the corner of his eye.]
Justice: “Get up…and for God’s sake cover yourself.”

“I for one applaud the events in Europe. The accounts you read in the press always miss the point. No one is talking about how Hitler managed to save his nation from the brink of economic collapse and restore dignity to his people… and no one is taling about the real vision – just the man behind that vision. Yes, of course people are dying. People *should* die. It’s about time we exterminate the undisciplined and perverse from our own ranks instead of waiting around for the forces of the Almighty to come down and do it for us.”

Hooded Justice was one of the earliest costumed heroes, becoming active shorty after the Crimson Avenger first appeared.

Justice quickly became infamous for the sheer ferocity with which he attacked criminals, to the point where he was actually apprehended by Green Lantern after one particularly brutal incident. Fortunately for Justice, as Lantern was taking him to the police station, the Sportsmaster attacked Lantern, and the vicious crimefighter managed to escape as they fought.

As in Watchmen, Hooded Justice joined the Minutemen (a act which caused him to gain some legitimacy in the eyes of the public). When the Minutemen were disbanded due to World War II, joined the All-Star Squadron alongside those Minutemen who hadn’t been drafted or reinstated into the military.

That was much to the disgust of some of the other A2S members, who made no secret of their displeasure at his methods, and barely tolerated him.

When the Minutemen re-formed after the war, Hooded Justice stayed with them until their breakup in 1949, whereupon he returned to his savage crusade to clean up the streets of Gotham.

Though Hooded Justice disappeared into legend sometime in the early 1950s, an equally ruthless crimefighter known as The Reaper took his place in Gotham City. Rumors persisted that Justice and the Reaper were one and the same, but this was later proven untrue.

The more superstitious criminals within Gotham variously believe Batman to be a descendant of Hooded Justice, a reincarnation, or even Justice’s spirit still walking the earth, barred from Hell due to his crimefighting and from Heaven for his cruelty.

Community member Frank Murdock suggests that if DC is planning on incorporating the MLJ/Archie Adventure characters into its continuity, it is possible that the Hooded Justice was a contemporary of the Hangman or perhaps the original Archie version of the Black Hood.

Community member Peter S Piispanen suggests a link with a Marvel Comics character: Parker Robbins, aka the Hood, was a small-time crook in NYC that surely had heard about the legend of the Hooded Justice. Upon receiving his magic garment, he decided to call himself the Hood in order to strike a blow against the old legends of the ruthless hero.

Perhaps he is wearing the clothing of the original Hooded Justice, and the clothes were magical without Muller having realized the truth. The name the Hood is likely also a pun at the word “neighborhood”, given that he mostly operates in the poor suburbs.

Taking out the Trash lists H.J.’s STR as 06, while the later Watchmen Sourcebook lists it as 05.

Source of Character: “Watchmen” Graphic Novel, the “Who Watches the Watchmen” module by Dan Greenburg, the “Watchmen Sourcebook” and “Taking out the Trash” module by Ray Winninger (from which I cribbed most of the History and stats, though I disagreed with a few.) 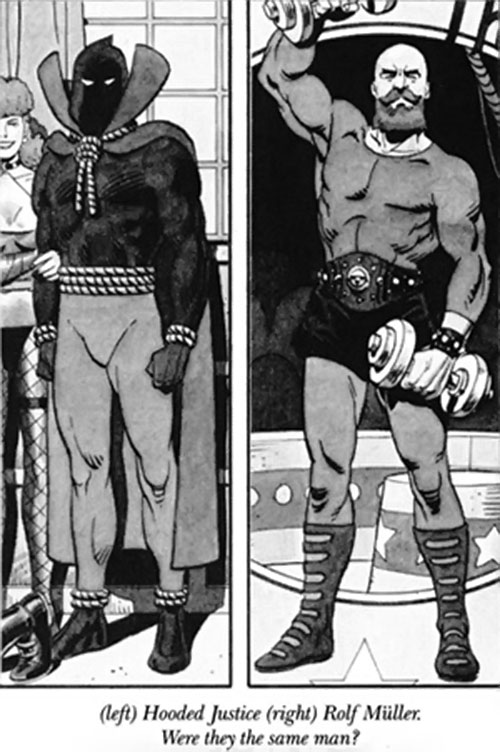 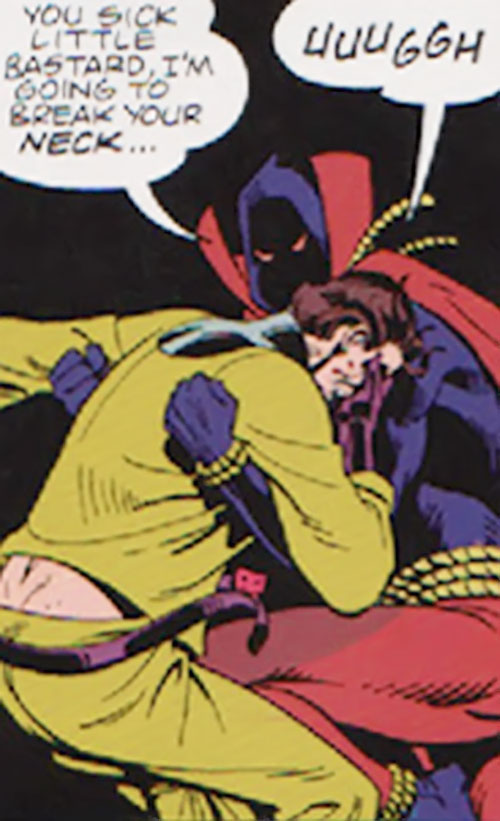 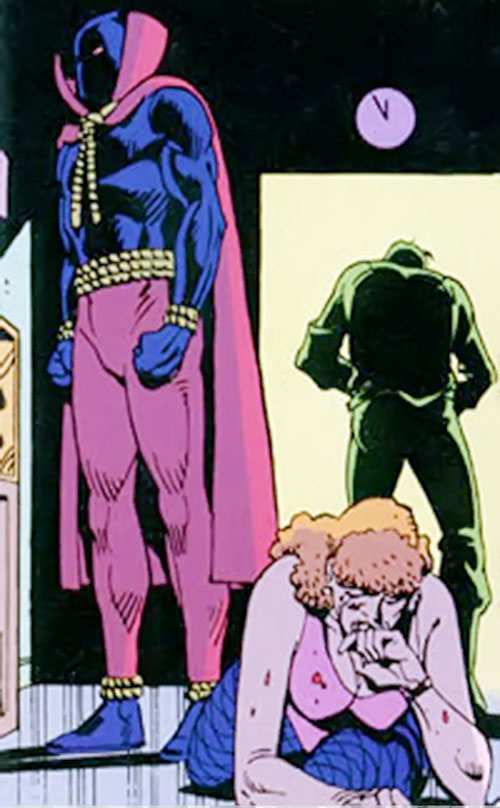 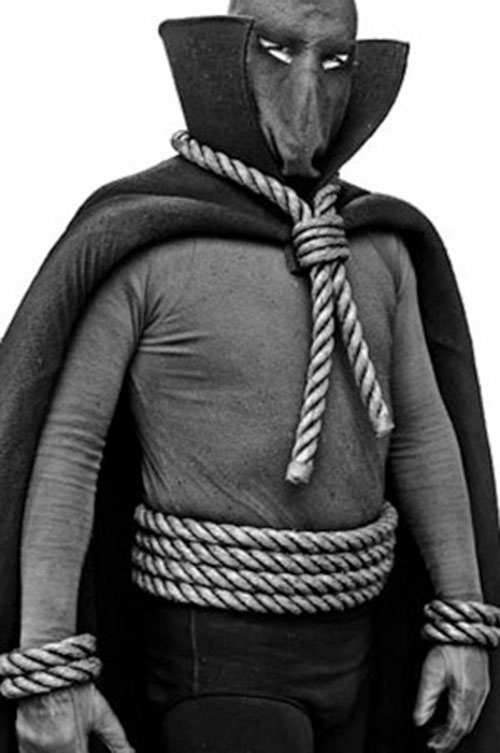 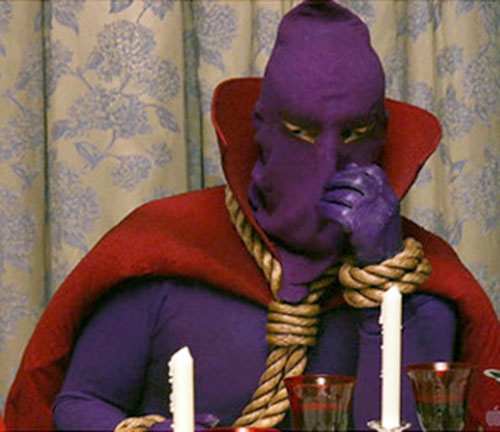