It had a far too brief lifetime of publication, and being a superb book, it deserves far more attention and mention than what it has gotten thus far.

Therefore, this profile is in honor and a celebration of the classic series as well as the recently published Time Warp v2 #1 (2013) One Shot from DC Vertigo – a fine relaunch initiative and an excellent book that I’d love to see more of!

Hobson is a mechanical genius, capable of building technology beyond anyone else’s reach.

His crowning triumph is his working time machine.

While he prefers to work along he does have some people skills. Even if greed got the better of him in the end.

The edge of time

The time travel machine of Hobson’s is designed like a standing metal cylinder. The interior looks like a fusion of digital and steampunk  era techs.

A digital panel, in front of a comfortable chair, is used which has departure and destination panels that are set before traveling. Once these are set only a start button needs to be pressed, and the procedure simply repeated upon return.

The panel also features all sorts of other readouts, such as for power, pressure and more.

Hobson found out that the unexpected rigors of time travel would eventually destroy the machine. This is why it has a limited set number of total uses before breaking down permanently (in DC Heroes RPG terms, charges).

One might assume that theoretically the machine could shake apart during one single, sufficiently long continuous use, regardless of remaining Charges.

Hobson, having designed the machine, can calculate exactly when the machine will break down, so this poses no real danger to him personally.

The machine is limited to a maximum traveling speed through time of one year per second. Hobson calibrated the machine to work this way through a radiometric clock. While the trip he usually took of 500 years would take eight minutes and twenty seconds to carry out, longer time distances would be tedious.

Now, that would certainly be a clear Limitation — he has got to plan quite a lot for making long, long journeys through time. In game terms this is a Delayed Limitation to his Time Travel Power worth -2FC. Reaching the edge of time is not that easy!

Horace Hobson was a crazed scientist from around our times. He somehow built a working time machine in a hidden cave.

The plan was to travel through time and then announce his awesome achievement to the scientific world!

During his first try he reached five hundred years into the future. But he only found a slightly radioactive wasteland, as he had more or less expected.

As he was exploring the area he was stopped by a Radiation Ranger monitoring the area for radioactivity. Hobson, unafraid, explained everything and showed the man, whose name was Ajon-4-CJ, his machine. Having been shown proof, Ajon could do nothing but believe his story.

Then Ajon, in his turn, informed Hobson that mankind had moved underground into large underground cities due to excessive surface radioactivity (due to a past nuclear war?). Hobson had brought along some dimes and some gold, which he planned to use as future souvenirs and for future payment, respectively.

Ajon informed him, however, that gold was worthless. Too much of it had already been found as mankind moved underground. But the dimes were worth a fortune. Ajon proposed that they make partners and sell the dimes, and Hobson readily agreed.

They drove together to the vast underground city of Crescent City. Instead of filming the scenery Hobson’s mind was filled with greed.

However, Hobson found that the pills and tablets that the future populations used for nourishment did not really work for him. So he decided to cut his visit short to return home for some food and supplies.

He and Ajon decided that Hobson would return exactly one week later, and so Hobson was on his way.

When home again Hobson studied the accumulated engineering stress data. He found out that the machine could only survive one more round trip. That put a new spin on things, and so Hobson, greedily decided to cut out Ajon from the partnership.

And so, he returned back to the future, well prepared, only three days later. That was four days ahead of his planned meeting with Ajon. Hobson started walking back and forth between his machine and the city, selling dimes and carrying back gold as fast as possible.

However, during the second day of this frenetic activity Ajon was out on patrol again in the area. He detected the same aberrant readings that had led him to meet Hobson in the first place.

Surprised, he found the machine returned to the cave. As he looked inside it he saw that it was filled with gold. Ajon thus realized that Hobson was trying to cheat him out of their deal.

Hobson had told him enough about the machine to know how it worked. The ranger donned Hobson’s clothes, left behind, and went back in time to modern times. Just as he arrived in modern times the machine finally broke down, which left both Hobson and Ajon stuck in each other’s respective times!

As Hobson returned to the cave, he was devastated to find that the machine was gone. He was, in fact, promptly bereft of all reason and was caught by some Rangers while wandering on the surface babbling incoherently.

Hobson ended up as patient #6518 at the Crescent City Hospital where he kept on building a time machine in the workshop. However, being hopelessly insane, he was only hammering steel beams with a maniacal stare, not a good ending for a man with such large ambitions!

Ajon, however, lived an eccentric millionaire in modern times.

But his physiology could not handle the planet’s air or eat its food, and was an easy prey for all its diseases. Therefore, he had to live in a sterile, underground complex while hiring the best inventors and scientists to try to hopelessly construct a new time machine. Only a slightly better fate that one!

Hobson is quite a frail, elderly male clad in stylish clothes.

Hobson is a scientist that has an adventurous streak and never feared traveling through time. Rather, he would be curious about seeing other times and was even clad like a jungle explorer.

He will carry a recorder to tape his thoughts for posterity, expecting great riches and fame one day. And indeed, he would have earned his place in history having built a working time machine!

While it’s not clear how he could have funded building the machine in the first place, his clothing and manners suggest that he was already relatively affluent to start with.

However, his drive for fame and even more for power eventually filled him with sufficient greed to make him neglect good and careful planning, which he evidently had done up to that point.

Hobson is clearly not a very stable person. He irrevocably fell apart when he realized his goals were not readily reachable. Even though he could probably rather easily have built a new time machine using future technology, he didn’t have time to consider that option before loosing his sanity due to seemingly crushing hopelessness.

Given the apparently lax mental healthcare of the future it’s tragically very doubtful that he will ever return to sanity and his own time.

“Beside this vocal record, I also intend to bring back extensive films of the trip — as the crowning jewel of my triumph !”

“Since I can only do it once more — at least until I build another machine — why not cut out Ajon and keep all the profit ? Deceitful ? Greedy ? Immoral ? So be it !”

“Frankly, Ajon, I’m starving ! Your diet of tablets and pills doesn’t work for me. I need real, old-fashioned food. And I’ll bring along a good supply when I come back.”

Actually, it’s possible that the Linear Men would eventually have detected his illegal detours through time, tracked him down and returned him to his own time.

At that point, Hobson would likely slowly regain his sanity and start his pursuit of fame and richness again!

Notes:
At the story’s end he also received the Catastrophic Psychological Instability Drawback, which made it impossible for him to concentrate long enough to build a new time machine. 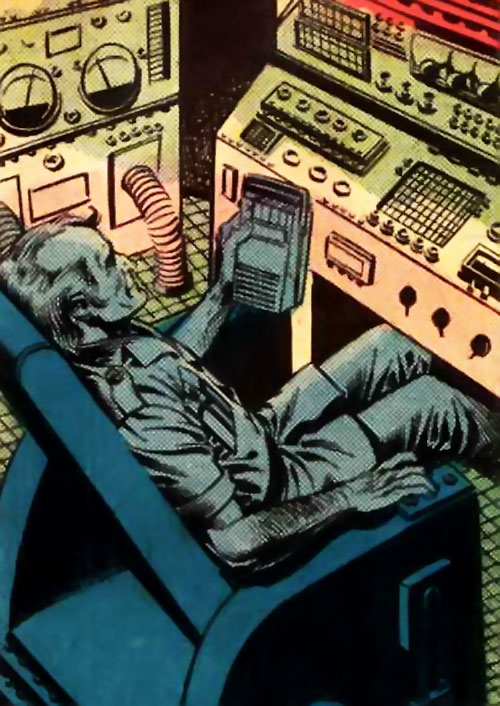 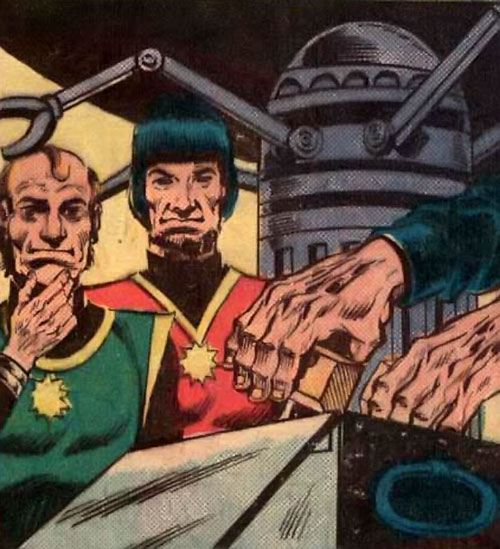 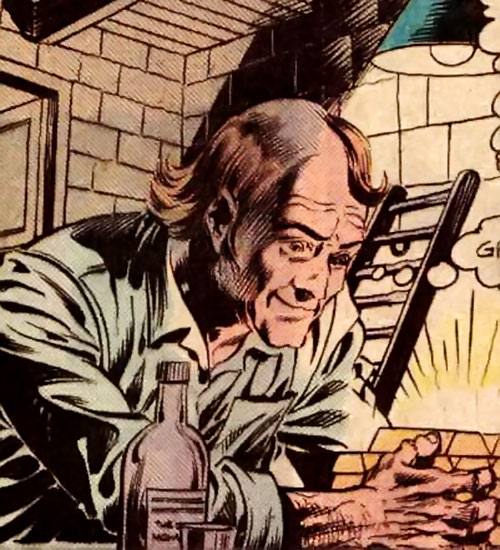 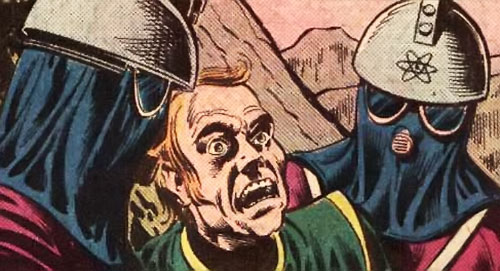