Horridus’ sharp thorny spikes can inflict some damage when used offensively, as can her many razor-sharp teeth.

The orange spiked region of her skin is superhumanly impervious. However, her palms and soft underbelly are more vulnerable.

She possesses limited superhuman strength and a definite degree of superhuman agility.

She possesses heightened senses in the form of improved vision and smell.

Meggan Tully was dating George Hill. One night she was abducted by aliens and impregnated. Wiped clean of her memory, Meggan was returned to her car.

When Meggan found out that she was pregnant, she assumed that George Hill was the responsible party. George “did the right thing” and married the woman with whom he’d been carrying on a relationship.

When she was born, a disfigured freak, the devoutly religious couple was convinced that God was punishing them because they had premarital sex.

They kept their daughter chained up like a dog in their basement. There was only a flickering television set to keep her company.

After years of guilt and suffering, George and Meggan Hill took their own lives in order to escape their torment. Their daughter was discovered, still chained in the basement, half-dead, in her DeKalb, Illinois home by the local authorities.

The police sought aid from the Dragon and the Chicago Police Department.

Captain Stewart was delighted to have another freak in his midst. He made every effort to get her to join the Chicago Police Department’s Freak Force division. She went through the police academy and joined the Chicago Police, having nowhere else to go.

Later still, all members of the team, except Dragon, left the Police Department because of the various restrictions and formed the group of super-powered bounty hunters called Freak Force.

Save for on the palms of her hands and feet, her head and her soft supple underbelly, Horridus’ skin is a thick orange hide. It completely covers her in sharp thorny spikes, including on her prehensile tail

Horridus’ head is lizard-like in its construction (the name “Horridus” comes from half of the scientific name of a lizard that she resembles).

Like a shark, her nose comes to a point and the sides of her heads form “tail fins.” Her eyes are quite large and are situated on either hemisphere of her head, and she has many razor-sharp teeth.

The parallel with the Chicago Underworld depicted in Hawkman should be obvious, and the Freak Force program would be quite logical. Aside from the Conglomerate, there are too few minor super-heroes groups in the DCU anyway, as everything is centered on the JLA.

Bonuses and Limitations:
Skin Armor is partial and can be bypassed with a +3 OV Trick Shot (-1).

Equipment:
Horridus is not trained to use equipment. 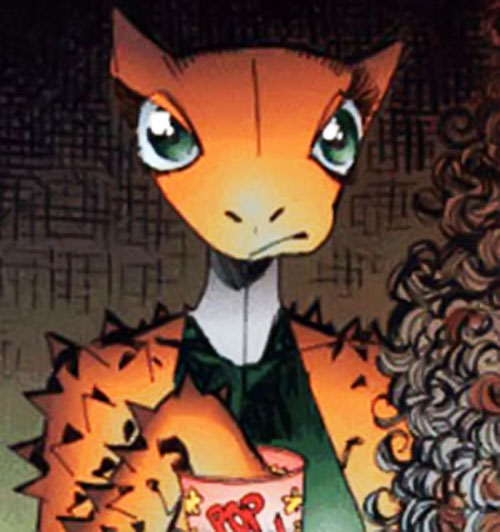