The Horseman comes from a police corps with robust training and a large répertoire of skills.

He is obviously talented and experienced in streetfighting. He almost seems to welcome violence when he acts as a vigilante, and excels at it.

The man only known as the Horseman is an officer of the Gendarmerie Royale du Canada – the Royal Canadian Mounted Police .

In 1989, a young stripper came to him with incriminating pieces of evidence regarding a certain high level mobster. But the cop was mostly interested in turning this into a promotion, and didn’t protect his informer enough. Before she could deliver him the documents, she was sold off to an USA-based slavery ring.

The cop suddenly realized he had acted like a jerk, and that the girl’s only chance for freedom lied in him crossing the border to come to her rescue. He shook off his moral apathy and acquired a strong Justice Motivation.

Journey to the South

Taking a vacation, he went South of the border to track down the girl. He went from strip club to strip club, quickly directing his search toward Seattle.

Obviously needing to vent his rage at having been too complacent to act in time, he never hesitated to clash violently with he bouncers of such establishments. The rogue cop thus left a trail of violence and burning cars. He also accumulated an arsenal of confiscated street-level weapons.

Meanwhile the stripper, not expecting the cop to actually look for her, attempted some blackmailing of her own. Her crucified corpse was discovered by Green Arrow (Oliver Queen).

The archer fully intended to kill the man responsible for the stripper’s torture and death. He started hunting the Horseman down. Howevber, Queen soon realised that the Horseman wouldn’t continue searching for someone he had killed.

Green Arrow recovered the stripper’s documents, handing them over to the Canadian vigilante. The Horseman returned to his job and used the incriminating evidence.

Green Arrow later met the RCMP cop once or twice in Canada, usually receiving discreet help from him.

The Horseman is a taciturn, stony-faced gendarme. He’d rather stay a sensible, disciplined, dour professional. However, his sense of duty toward the defenceless and his need to see justice done gnaw him from inside. These will occasionally drive him to take justice into his own hands.

As a vigilante he is a curt, cold, tough guy. He doesn’t give a crap about the opposition or what others think.

When discussing or thinking about his motives, he feels they are stupidly idealistic. Therefore, he will wrap everything in heavy-handed sarcasm, describing himself as a knight errant righting wrongs, saving damsels and slaying dragons.

This metaphor is the reason for his “Horseman” nom de guerre. It’s also a reference to the RCMP mounted police role.

“Tell your supplier the Horseman is coming for him.”

Advantages:
RCMP credentials (Low). The Horseman might speak French, depending on which province he is from.

Source of Character: Green Arrow #17-18 and others (Mike Grell run). 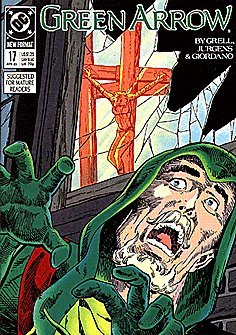