While super heroes may not get sick often, it’s not uncommon for supers to take victims to hospitals; or for power complications and the like lead to examinations by doctors.

There are even a few as part of their superhero persona. Or their villainous persona, such as the various Crime Doctors.

Street level characters sometimes have big subplots around seeking medical attention, and it may be useful to have an idea at what technology hospitals have available to them to examine patients, and what limitations apply.

Looking at the equipment should also give an idea what super powers can revolutionize medical care.

I have included rough costs for the devices both in terms of Hero Points and in Wealth checks to buy one off the shelf of a medical supply store (or from the manufacturer for some of the larger pieces of equipment).

The wealth scores are often a range representing a variety of quality in the items available. Those used in surgery are usually the higher end of the scale. Sometimes the varying cost can come down to features which don’t directly affect game stats, but might make it easier to use for technicians.

From a Gadgetry mechanics perspective, these devices give a general idea of what is available without the Genius advantage. If a character has that, however, there are far more efficient ways to build better devices given the game mechanics.

The Hero Point cost might vary slightly depending on how much you think the limitations or restrictions which make them realistic are worth.

Additionally, it is possible a GM could require a Medicine check to read or operate any of these devices. It’s not uncommon for multiple doctors to examine a scan just to make sure the first doctor doesn’t miss something.

Electrocardiographs and electrocardiograms (EKG/ECG) detect small electrical charges. They allow clinicians to determine a number of factors related to heart activity. These include heart and respiratory rate, rhythm, and can be used to identify recent heart attacks and other conditions.

The signals are shown as waves on a monitor or printout. They are used in conjunction with hemodynamic monitors (via a cuff or with an invasively inserted transducer), which allow clinicians to track pressure and flow of blood. On monitors these figures usually appear as numbers to the side of the heart rate wave.

While there are several things that can be observed through an ECG, the most common thing they’re looking at is the heart rate and rhythm. This is especially true in relation to surgery and defibrillators.

A regular heart rhythm is between 60-100 beats per minute (BPM). Slower than that is becomes bradycardic while faster is tachycardic. You can see more about reading an ECG over there.

Medical patient monitoring systems are multi-parameter systems. These use a combination of electrodes, infrared finger monitors and other devices to track multiple physiological parameters critical for patient care.

While historically they were a system of individual devices, current practices is systems which incorporate several parameters into a single system and readout.

These devices are especially common in Intensive Care Units and integrated with anesthetic machines in surgical theatres (“Operating Rooms”). 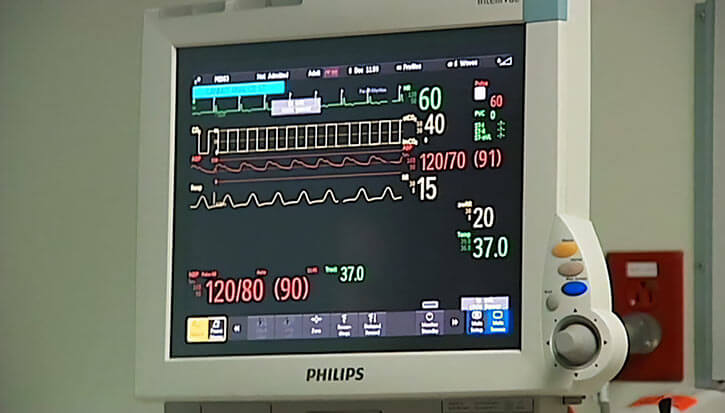 Defibrillators are devices that restore a normal heartbeat through electrical shock. They can correct for heartbeats that are too fast or slow, and can restore a heartbeat to a heart which has suddenly stopped beating.

There are devices which are a form of defibrillator that can be implanted or worn by heart patients. But, the main two types of defibrillators most people are familiar with are: 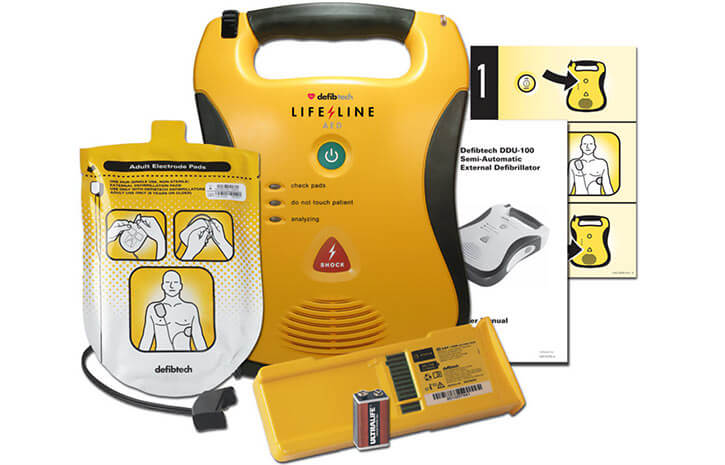 Automated defibrillators can automatically detect dysrhythmia and apply an appropriate shock to stabilize it. Lightning can be controlled incrementally.

Lightning only works on those with no heartbeat or irregular heartbeat. It may allow an additional Desperation Recovery check to a character whose heart has just stopped (reached negative Body condition or lower) at no cost in HP. If this check is successful, it does not prevent further deterioration unless further medical care is provided.

All powers at range of touch, and only work on a single patient.

Lightning can be controlled incrementally.

Manual defibrillators require medical professionals (Medical Treatment Subskill of at least 02, or appropriate advantages) to operate. They are usually used in conjunction with EKG machines.

They may allow an additional Desperation Recovery check to a character whose heart has just stopped (reached negative Body condition or lower) at no cost in HP. If this check is successful, it does not prevent further deterioration unless further medical care is provided. All powers at range of touch, and only work on a single patient.

Gigantic and/or super-strong patients may require custom-built manual defibrillators of enormous power. For instance, Dr. Waynesboro once used a 2.5 gigajoules defibrillator to restart the heart of the Hulk (Bruce Banner) after he had been fatally wounded by Zeus. That’s enough energy to heat an American Midwest house during a winter month – and I’d assume that was per impulse. 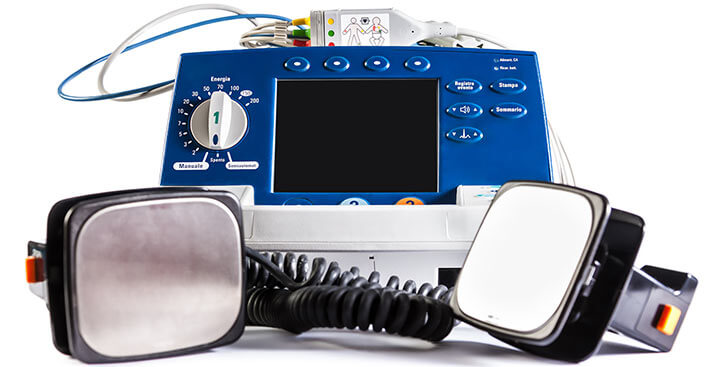 Ultrasound scans, or sonograms, use sound waves to create an image inside the body.

The device utilizes a wand-like device called a transducer. It is placed on the patient’s skin and sends soundwaves into the body which bounce back when they encounter denser tissues. This provides 3-dimensional information.

It is used most often to check fetal development with pregnancies, but is also used to detect problems with organs and to assist with biopsy. Higher frequency waves provide clearer pictures, but penetrate less deeply into the body.

The transducer can also be used in various orifices. Small ones can be attached to probes to help examine more internally or to guide surgeons during procedures. 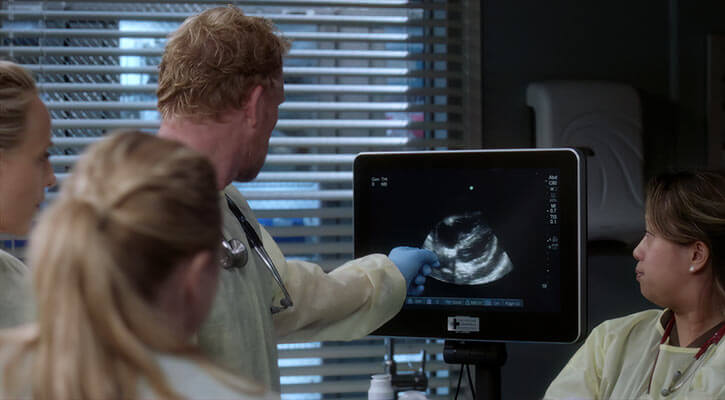 A regular ultrasound only captures a still image and measurements. Some sonograms use the doppler effect to capture motion, and are referred to as Doppler Ultrasounds. They are primarily used to measure blood flow in tracking some heart and artery conditions.

The amount of blood flowing is sometimes color coded and at other times given in a numerical readout, depending on the interface.

While some doctors feel the pictures are not as clear on these devices (most likely due to the smaller screen), studies have shown they are just as accurate in measurements as the more standard models.

They have also gained popularity during the pandemic as they allow doctors to quickly assess COVID patients with minimal exposure for the medical staff. 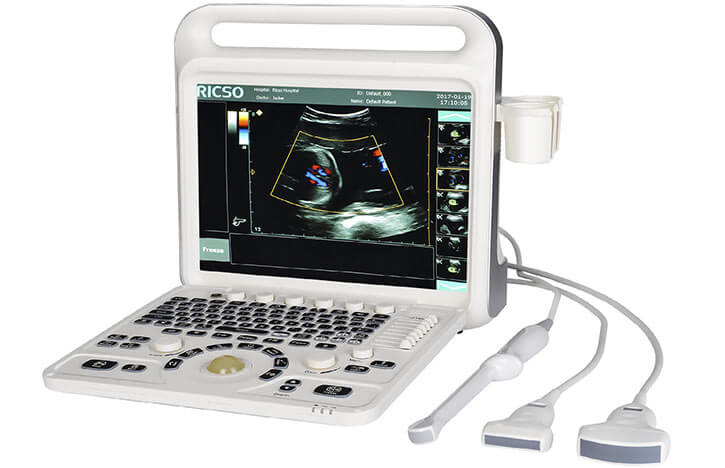 Projectional radiography utilizes X-Rays to create a static two-dimensional image for diagnostic purposes. The device consists of an X-Ray generator to create the beam, and an imaging detector.

Sometimes a Bucky Potter grid is used between the patient and the detector. It reduces the scattering of X-rays to improve the contrast on the image, but exposes the patient to more radiation. 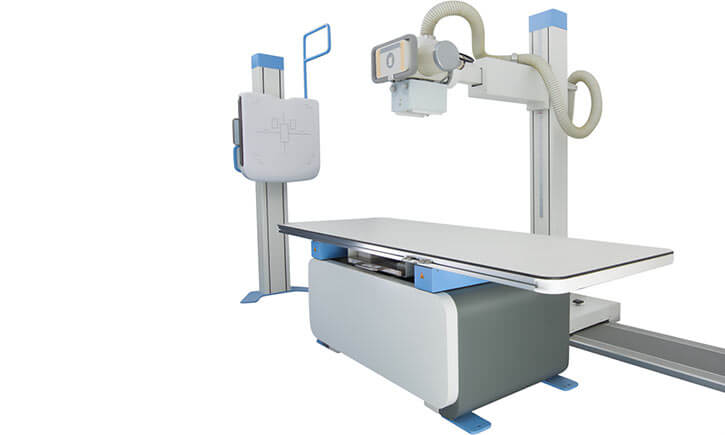 A Lodox scanner is a specialized X-Ray machine which creates a 6-foot image within 16 seconds. They are primarily used in trauma centers and forensic pathology for full body scans.

The technology utilizes a thinner beam and detector than traditional X-Ray machines. This beam moves over the patient similarly to a document scanner. This allows a higher quality image with a much lower dose of radiation.

Computerized Tomography machines (CT scanners) combine a series of highly detailed X-Ray images. These are taken from different angles at the same time to produce cross sectional images to see bones, blood vessels and soft tissues in the body.

They are primarily used to quickly diagnose internal injuries from accidents and trauma. But a CT scan can also be used to locate tumors, diagnose some diseases, or to visualize parts of the body in order to create surgical or other treatment plans.

Contrast materials are sometimes used to improve the image. 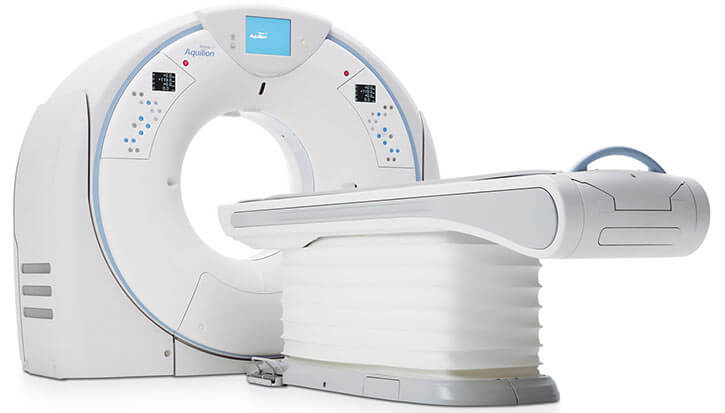 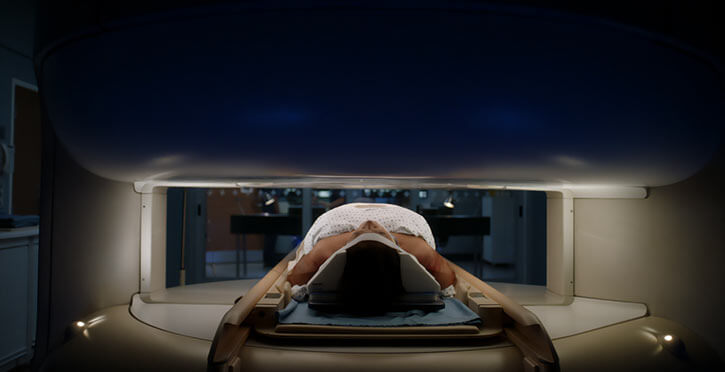 Magnetic Resonance Imaging (MRI) uses powerful magnetic fields and radio waves to create HD 3D-map the anatomy and processes in the body. It does not involve X-Rays or ionizing radiation.

MRIs measure polarization in cells within the body. Video imagery can also be taken. Depending on the system being looked at, contrasting agents may be used to improve the image. 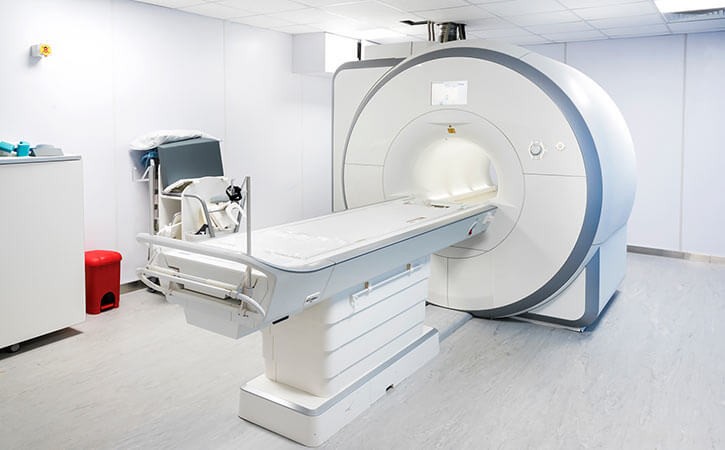 A DNA sequencer is a scientific instrument that can determine the order of the four bases (Guanine, Cytosine, Adenine, and Thymine).

The most recent models of DNA sequencers can prepare samples in as little as 90 minutes and the entire human genome can be sequenced within days.

The hospital has patient charts completely digitized into master database. These can be accessed via touch screen tablets by any doctor assigned to the case.

These tablets can be used to view a patient’s entire medical history with the hospital including any scans, charts, or doctor’s orders and notes. 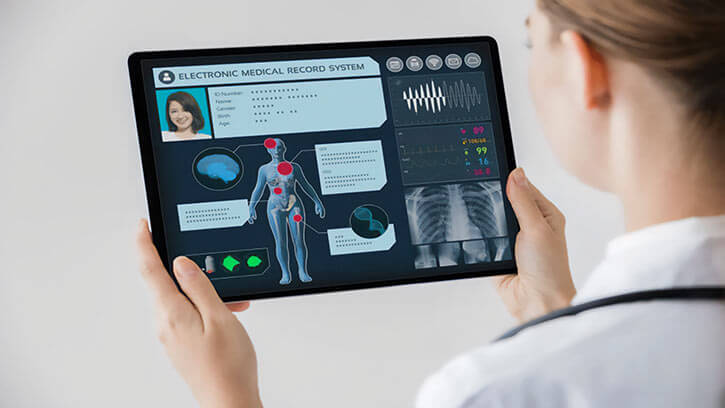 There are several rooms in the hospital with either light panels for viewing X-Rays, or banks of large screen monitors taking up entire walls to be able to sort through scans.

These rooms typically have a desk with a computer (which controls all the panels) and several traditional monitors in the middle of the room.

Neurologists especially make use of these viewing rooms especially when consulting with other departments.

One kind of room even has a 3D holographic projector to help visualize difficult to reach tumors and anatomy that may be more difficult to see in 2D scans and images. 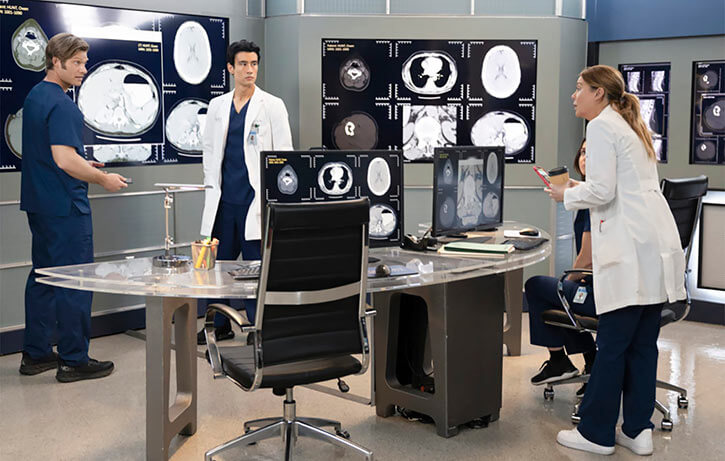 Medical 3D printers are used in medicine to print exact replicas of anatomy for a variety of purposes.

In some cases, an exact replica of a tumor or body part can be created to help plan a surgical approach.

In others, replacement parts can be modeled to go into a virtual body. So that an exact fit can be created based on medical scans before ever opening a patient surgically.

Materials used in medical printing include biodegradable polymers, metals, plastics and ceramics depending on the situation.

Medical printers have additional advantages over traditional manufacturing in that they can layer these materials and parts directly without need for separate assembly.

The hospital has a stem cell laboratory which can be used to grow replacement organs.

The cells are then manipulated to become specific types of cells – such as heart muscle, blood cells, or nerve cells. The cells are then used to grow replacement organ material which is transplanted into the patient.

This carries the advantage of no risk of rejection since they are made from the patient’s own cells.

Research into regenerative medicine has shown that in some cases it could be possible to inject stem cells directly into an organ and potentially repair it directly.

Anesthesia Machines (or anaesthetic machines in the UK) are medical devices used to deliver medical gasses to a patient, usually with the purpose of keeping them unconscious for medical procedures.

This machine requires an Easy (2/2) Medicine roll (appropriate Scholars such as Anesthesia may apply) to operate. The roll may be modified if the patient has any allergies, resistances or unusual blood chemistry as appropriate, especially if the anesthesiologist is unaware of the condition.

Failure can result in the patient waking up during surgery, heart failure, or even strokes or aneurysms depending on the situation.

They are limited in that they can not be used near oxygen since that could cause a fire.

While this is considered a robotic system, there is not an AI which does the surgery.

The system consists of a set of advanced robotic assisted instruments controlled by a surgeon via a panel. The tiny wristed robotic instruments can fit in small openings and move with a much greater range of motion than a human hand.

The system also gives a 3D high-definition magnified image for the surgeon to utilize. Combined, these tools allow for surgery through much smaller incisions and is less invasive than a normal surgery.

This system provides -2 CS to OV for Surgery checks due to flexibility of the system. Alternatively, you can use Enhance (Medicine Skill): 03 (cap is 09). 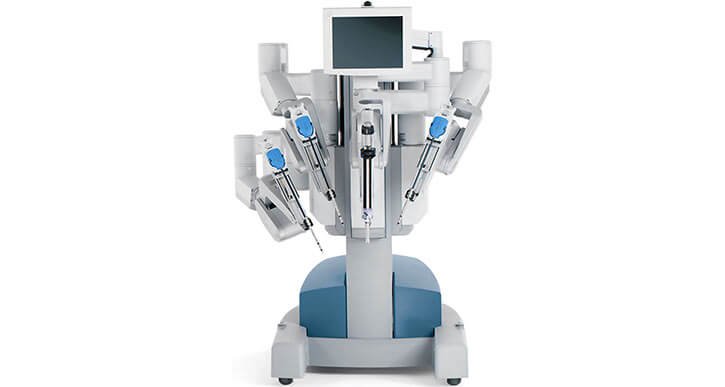