In the days of yore, these guys could have *some* utility as a reusable costume design. Say, for Gamemasters wanting to introduce new villains in their campaigns, but lacking artistic ability. However :

Hotshot can throw fireballs. That explains the name, yes ? Yes.

Apparently, he’s accurate enough to force Spider-Man on the defensive.

“It’s going to be a hot time in the old town tonight” mutters Spider-Man, presumably embarrassed that he didn’t get a good line from a better writer.

To the staggering astonishment of the gasping readership — they gasp because they are surprised — Spider-Man throws Hostess twinkies at Hotshot to distract him.

The would-be calcinator is therefore captured, as is just and right. 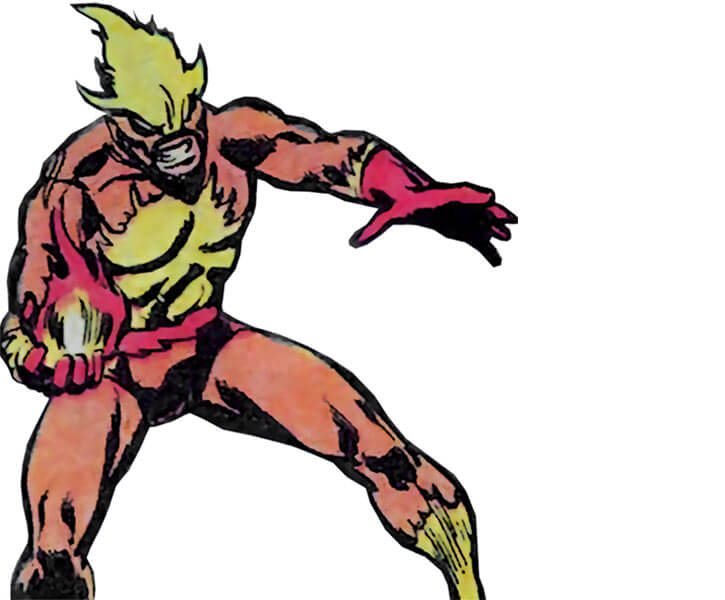 In 2009, Hotshot was seen in the S-Wing of an unspecified New York prison. He was now much fatter, and may have aged since 1979 (unlike, say, June Jitsui).

He briefly participated in an accidental breakout, but everybody was brought down using sedation foam.

“You’ll be a pile of ashes when I really turn on the heat, web head !”

Stats (including the Motivation and Occupation) are almost wholly arbitrary.

Once he was out of shape, his scores (and particularly his Enhanced Initiative Power and Accuracy (Skill)) were likely markedly lower.

Source of Character: 1979 Hostess advert in some comic.