Hotspur’s main abilities seem to be strength and durability, and extraordinarily strong willpower.

He quotes scripture in combat, and is an inspiring character to believers.

He fights clad in armor and using a sword.

Hotspur originates from the parallel world called Alternative 257. He might be patterned after evangelical hero Hotshot.

(“Hotshot” was an obscure Christian comic for tweens, published in the UK by Hope Press during the late 1970s and the 1980s. There isn’t a lot of data about it — Ed.)

Hotspur is one of the main characters that faces the multi-dimensional threat of the Lloigor. He seems to have been a great and revered hero on his world, and would probably have worked with some of the members of Black Flag, as well as Mr. Lion and Mr. Unicorn.

Hotspur was a victim of Lloigor possession, during which he killed Black Flag member Smiley Sun. However Hotspur became the first person to cast out a Lloigor using faith and mutilation – he burned a cross across his chest. 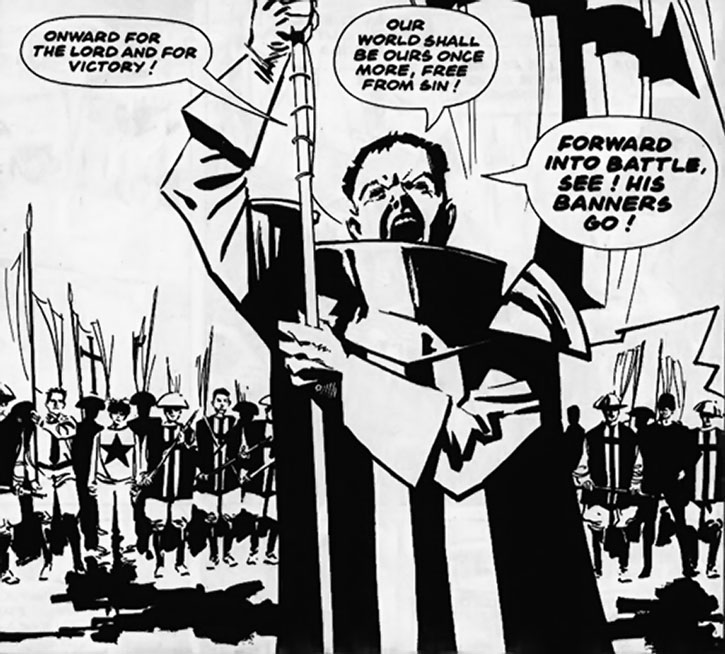 Hotspur led the hero expedition to Alternative 257, along with other evangelical fighters. But he was sucked into the Lloigor home dimension . There, Hotspur was tormented and left completely paralyzed by massive nervous system damage. But even in this state, he managed to discove that Maxi-Man, the leader of the heroic effort, was a traitor.

The fatally wounded Hotspur was dumped back on Earth by the Lloigor. But before he died, he told fellow hero Big Ben about Maxi-Man by blinking his right eye in Morse code. This allowed the assembled heroes to stop the true architect behind the Lloigor threat.

Hotspur is an athletic male with black hair. He’s clad in armor and wields a sword.

Hotspur is dedicated to doing the Lord’s work of liberating the world of sinners. He fights crime fearlessly and relentlessly. It’s very likely that he lives according to Christian ethic and moral views. He appears to be a natural leader for the heroic effort against the Lloigor threat

He is famous for his guts and strength of will, and more than a few have called him zealous. He likely borders on fanaticism, and nothing can dampen his enthusiasm.

His physical appearance, as to the armor and the sword, are exactly the same as those that Adolf Hitler was wearing in a famous painting. This may be a deliberate choice made by Hotspur to mark that he is fighting the Lloigor – who are behind the Cult of the Black Sun, Nazi mysticism and Thule imagery.

“Maximan has already told you how my body was occupied by a Lloigor spirit and how I triumphed over the weakness of flesh. I am told that no-one has ever thrown off a Lloigor possession. Well, perhaps that was true in the past, but this time these Lloigor were not dealing with undisciplined radicals and nancy-boys ! This time they were dealing with a soldier in the army of God ! I set a molten cross to my corrupted body and by pain and the wrath of the Almighty, did I expel the unclean spirit ! I am living proof that the Lloigor can be subdued ! That we can cleanse my tortured world ! And cast the Lloigor forever back into the fiery gulf of Gehenna !” (starts to sing) “As he died to make men holy, let us make men free, while God is marching on! Hallelujah !”

“Onward for the Lord and for victory ! Our world shall be ours once more, free from sin ! Forward into battle, see ! His banners go ! Forward ! At the sign of triumph, Satan’s legions flee ! Hell’s foundation quiver ! The Lord is behind us ! Burn them out ! Burn out the devils ! Burn them ! Satan’s imps ! I’ll destroy you !” 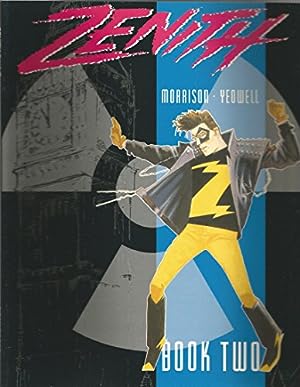 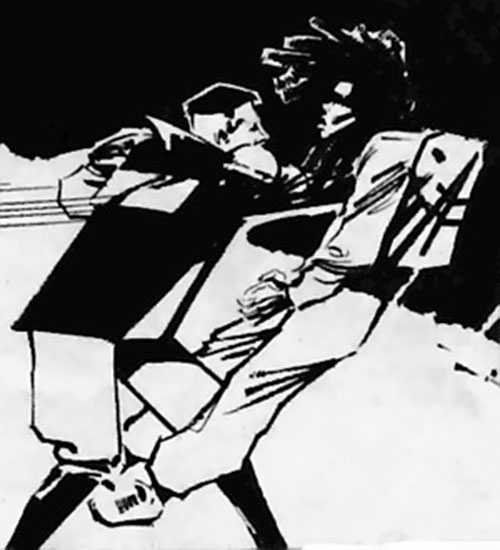