Shaka is an accomplished warrior and soldier, and a veteran commando. His DNA has been enriched with sequences coming from an unspecified “sea reptile”.

This may refer to a dinosaur, since sea reptiles are not too common nowadays (except for sea turtles, obviously). Perhaps plesiosaur  DNA was used, since S.T.O.R.M. is know to have access to prehistoric DNA sequences. In any case, the treatment made Shaka amphibious and superhumanly robust, and reportedly prolonged his life span.

The enhancements made him unable to properly regulate his body temperature, as odd as it may seem. Though room temperature is liveable, he’d likely experience problems in cold weather. This is compensated by wearing a heavy suit. Said hardsuit is armoured, equipped with sensors, and armed with shoulder-mounted weapons. The latter seem to be concussive cannons.

In combat, Howitzer prefers to fire at a range. He tends to engage other large, armoured opponents.

One panel vaguely implies a weakness detection ability. But for this writeup he’s just considered to have rolled a good double on that one.

As per the Gene Dogs main entry.

Shaka is calm. He has a moderating influence on the rest of the team. He sees balance in all things, and live by his own code of honor and justice.

Generally speaking he does the Noble African Warrior thing, with a dash of cautious wisdom and some occasional vague mysticism.

“You must purge yourself, Tyr ! Expunge any guilt you feel at her death ! Your anger damages our effectiveness as a team.”

“You are strong my enemy, but there is weakness in you, too…”

“Pacer is right — the real threat here is Hurricane — not Banzai or the rest of Q7 !”

Given the modest amount of material to benchmark them with, some of the stats are speculative. It has been assumed that all Gene Dogs had the generic Special Forces Skills suite from the generic soldiers entry on writeups.org.

Benefit 1 (S.T.O.R.M. sensors can focus on the Gene Dogs’s gene chips to monitor them and their vital signs). 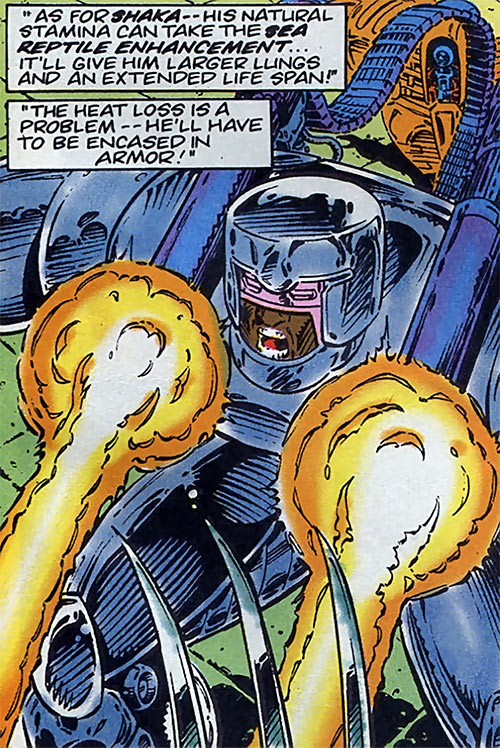 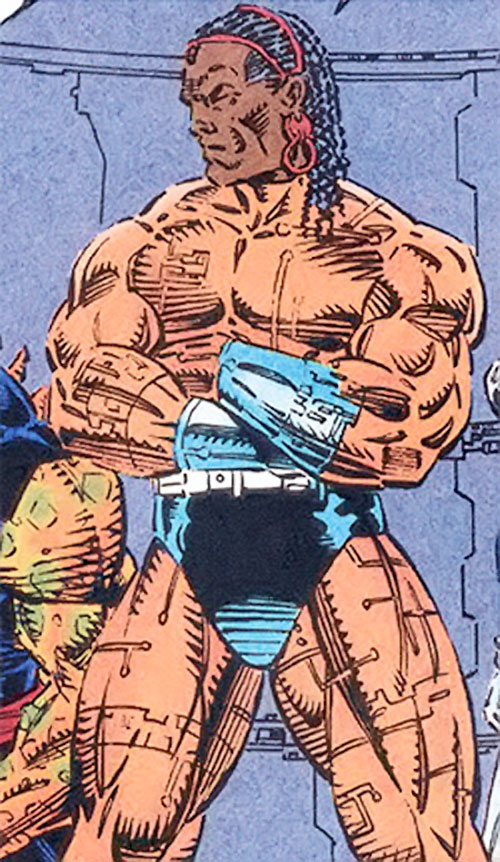