Huck was a minor comic book series published by Image Comics. The series tells the story of a small town boy with a fantastic secret that his neighbours are glad to keep. The tale is meant to give the reader an alternative to the dark, angst-ridden anti-heroes that permeate the medium.

In addition to his enhanced physique, Huck has the unusual psychic ability to find lost objects. Once he has a picture or name of a lost item, he can find it no matter where it is located in the world. The item can be anything from a lost necklace in Maine to a hostage in Afghanistan.

Anna Polina Marianna Kozar was only 16 when she was discovered by the Russian government. They travelled to her remote village after hearing stories about her.  When they arrived, they were shocked to discover that the stories were true. For some unknown reason, Anna had superhuman powers.

The scientists, hoping to replicate her abilities, took her to a secret military base. There, they tried to clone her for over a year before they admitted failure. Turning to more traditional means of reproduction, the scientists impregnated Anna.

Anna, who possessed a docile nature, went along with their wishes. She never struggled or put up an argument… until the day that she felt her child move for the first time. In that moment, she decided that her child would not be born in captivity.

Anna used her powers to compel a scientist to open the exits of the facility. She then disabled her guards and escaped. Anna fled to the United States of America, where she gave birth to a boy in the year 1981.

Anna knew that she would never be able to stop running and didn’t want her son to have to endure that lifestyle. Feeling that she had no other choice, Anna abandoned him at the footsteps of an orphanage with a short note. ”Please Love Him.”

The women that ran the orphanage, touched by the earnest plea, took the infant in and named him Huck. The women honoured their commitment, and loved Huck with all their hearts. One of them, Mrs. Taylor, took Huck in as her own son. In turn, their love filled Huck with a desire to help the people around him.

From a tender young age, Huck began to do a good deed for at least one person every day. It didn’t take long for the town to realize exactly how special Huck was, and they kept his gifts a secret. It wasn’t until his 35th year that his secret was revealed to the rest of the world.

It all started after Huck found his new neighbour’s (Dianne) ring at the bottom of a nearby lake. Dianne, her curiosity piqued, visited Mrs. Taylor to ask about his past. Mrs. Taylor, being a trusting woman, told Diane everything that she knew. 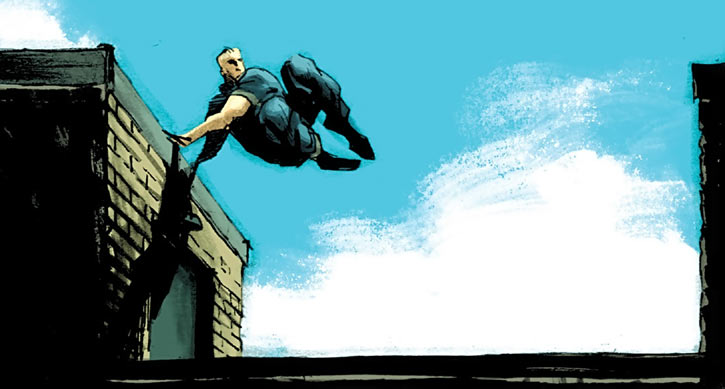 When a group of female hostages were freed in North Africa, Dianne knew that Huck was responsible. Dianne realized that she had stumbled into the story of the century. She immediately called every reporter that would listen and told Huck’s story.

The next day, Huck found himself besieged by reporters and people who needed his help. Huck, unable to refuse a plea for help, used his powers in plain view and became an instant celebrity. It didn’t take long for his new found fame to make Huck uncomfortable.

While ditching a party that the mayor threw in his honour, Huck encountered a young man named Tom. He claimed to be Huck’s twin brother and Huck, every trusting, took him at his word. Huck brought Tom to his home where Tom regaled him with the story of their birth.

He then told Huck that their mother was still alive but he didn’t know where she was. Once Huck got past the initial shock, he used his power to zero in on their mother’s location. It took the men a couple of days to reach Anna’s location in Vermont.

Huck couldn’t contain his excitement when they finally reached the small house. He rushed to the door and when it opened enthusiastically greeted Anna. His enthusiasm quickly turned to confusion when Anna told him that she only had one son.

Tom chose that moment to strike. He attacked Huck from behind with a brutal energy blast that rendered him unconscious. He then fired a similar blast into Anna with the same result. He then signaled his allies to emerge from their hiding places. In response, a group of Russian soldiers appeared and took Huck and Anna into custody.

From Russia with Love

Huck awoke some time later in a cell in Science City Three, deep in the heart of Russia. To his relief, his mother was present with him and in good health. Unfortunately, Tom was there as well staring at him from outside the cell. 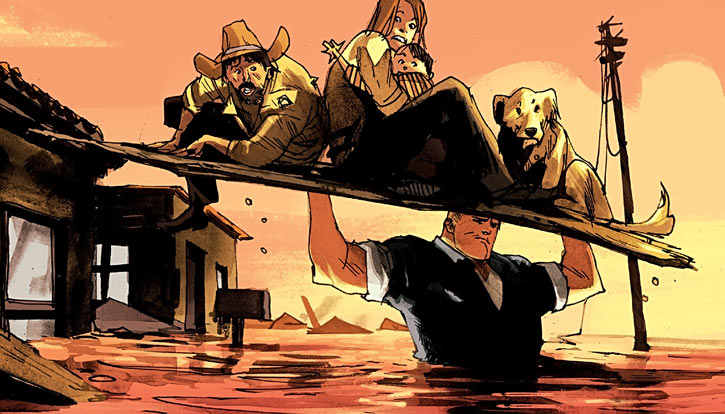 He was joined by a strange man who introduced himself as Professor Orlov. Orlov told Huck that he and Anna were currently in Science City Three (an abandoned Soviet base).  He then gloated about his victory and that he planned to use them to build a race of superhumans.

Orlov then left to report his success to his superiors, but not before revealing that Tom was a robot. When Orlov was gone, Huck threw all his titanic strength against the walls of their cell. Despite his best efforts, the walls of the cell would not budge.

Tom the automaton enjoyed watching Huck struggle for freedom. He taunted Huck while he watched him struggle. When Huck was on the verge of giving up, an idea came upon him.

Huck knew that under normal circumstances, he was not strong enough to break the walls of the cell. But his mother had the power to compel people to do whatever she wanted. If that meant that they had to surpass their normal limits, then so be it.

Huck turned to Anna and told her to command him to break the wall. At Anna’s command, Huck pushed past his physical limits and shattered the cell wall. By the time the guards arrived, Huck had destroyed Tom. The guards chose to surrender rather than face the two angry superhumans. Then Huck and his mother found Orlov and erased all the scientific knowledge from his mind.

With the threat ended, Huck and Anna returned home and picked up where he had left off. He once again started to perform daily acts of kindness and offering help to any who needed it.

Huck is a tall, stocky Caucasian male with Aryan features. He has short golden blond hair (with a suspiciously convenient curl in the front), piercing blue eyes, and perfect white teeth.

His frame is covered in layers of thick muscle, but not disproportionately, that doesn’t hamper his movements. He appears to move with the grace of a talented gymnast and while leaping through the air he almost seems to float.

Huck can almost always be found wearing a pair of blue overalls, a white t-shirt underneath and a thick pair of brown workboots. The back of his overalls has the logo of the gas-station where he works emblazoned in its centre. The logo is the number “78” framed by the outline of a gaspump with wings.

Huck is “simple”; in many ways he seems to come across in a manner akin to Forest Gump. He is pure, earnest, honest to a fault and has a child-like innocence about him. 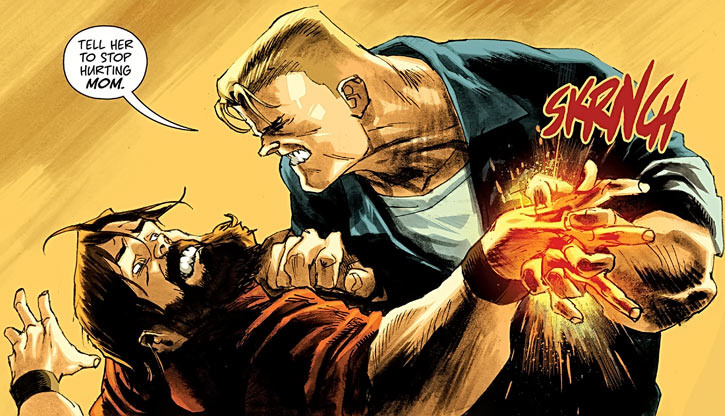 Huck has no interest in acquiring material things. He finds his work at the local gas station full-filling. The only thing he truly wants is to help the people around him.

Huck’s days always start with him waking up early and performing a good deed. His deeds have ranged from uprooting stumps for an infirm neighbor to hostage rescue. No deed is too bit or too small for Huck. All anyone need do, is ask him for help and he will.

Huck dislikes violence; he will do his best to avoid a fight whenever possible. If he has to fight, he will disable his foe(s) without causing permanent injuries if possible. When the fight has ended, Huck tends to the wounded (friend or foe) to make sure that they will recover.

“I brought some candy to cheer everyone up.”

Huck: “I need to get out there.”
Lady: “Are you crazy ? You’ll start a riot.”
Huck: “There’s a lady outside who’s really upset and I think she came to ask for help.”

“Don’t worry sir. I wouldn’t let you get hurt. Actually, I just want to double-check even these guys aren’t hurt too badly.”

“I know we’re on a mission, but we can’t ignore an emergency Tom.”

Bonuses and Limitations:
Acrobatics is a Powered Skill (+1FC). 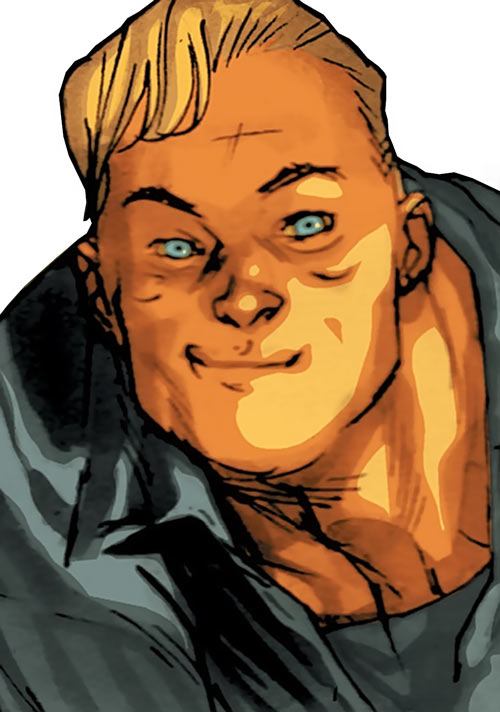 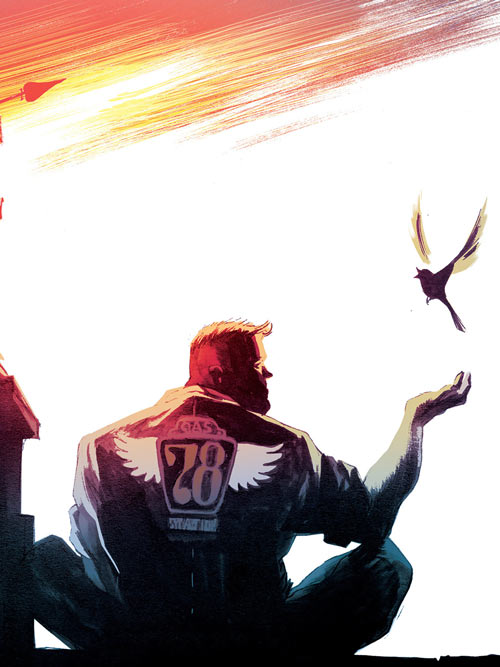 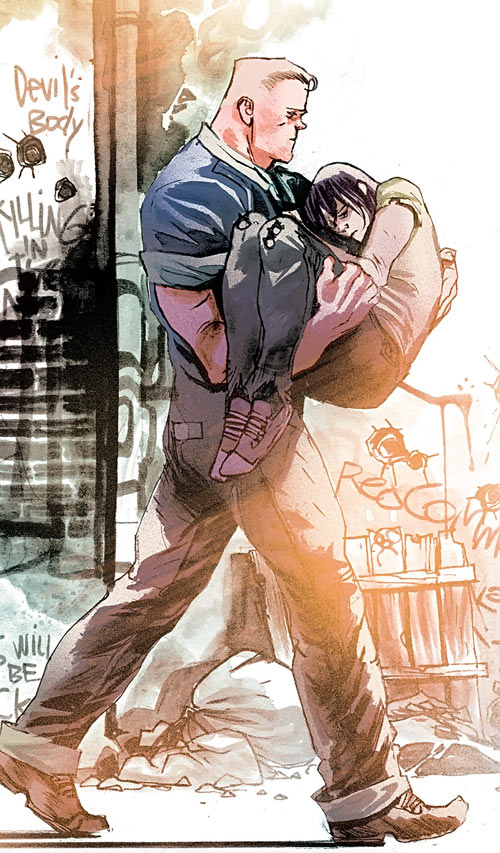 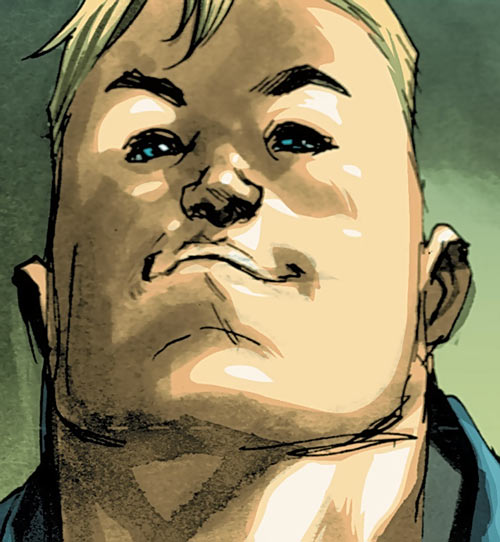 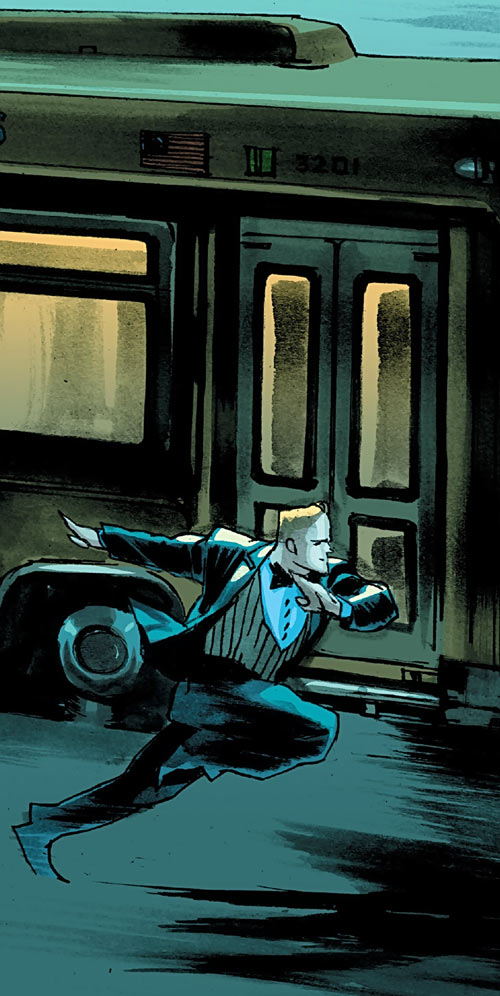