Doc Evans is a member of the 1959 version of the Suicide Squad, from DC Comics.

Squad members Dr. Evans and Jess Bright are often switched. To be fair they were interchangeable, and the vintage series sometimes mistook one for the other. Here we go with what’s stated in the earliest stories, and refuse to budge.

Dr. Evans is presented as an astronomer. From what he does — and his involvement in atomic research — it seems likely that he’s actually an astrophysicist specialising in high-energy physics.

But in practice it doesn’t really matter. What Doc Evans does is Science! with a capital S and a bang.

He’s a Silver AgeSuper-hero comics from the late 1950s to the early 1970s. comic book scientist, so he’s competent in every hard science and then some. For instance he’s an excellent chemist, and was ace at plotting gravity-well-based trajectories in space.

Like the rest of the Squad, Evans is not a sedentary academic. He has genuine skills in adventuring. The Doc is an able outdoorsman, equestrian, marksman, sailor, diver, parachutist, etc. and can throw a punch when needed.

He’s not as physically proficient as Bright or Flag, but Squad members tend to be polymaths.

They’ll blind you with science

Evans does his best work with his assistant Bright. In DC Heroes terms, their Brainstorming Schtick allows them to Team Attack scientific problems with unusual power.

This is usually how the Suicide Squad comes up with a plan against the menace of the month. 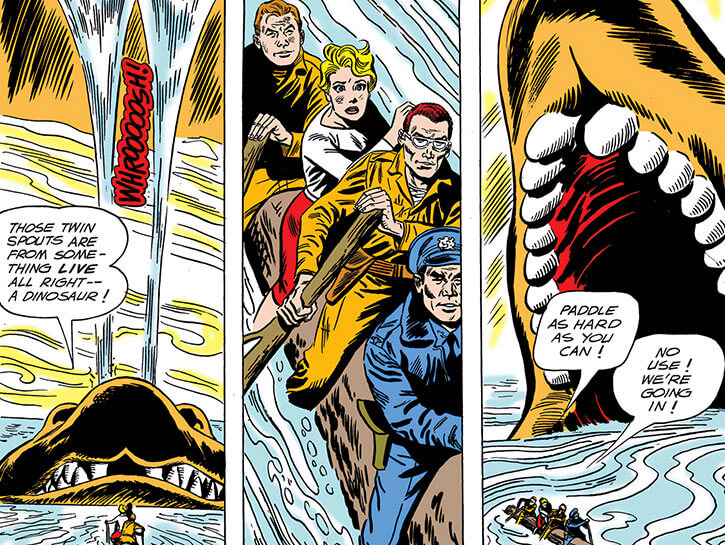 And so Doc is the guy with the crewcut, the glasses, no pipe, and who’s a bit older than the rest. Good ? Good.

Dr. Evans and his young assistant Jess Bright had been working together for several years. The defining moment of their collaboration occurred whilst they were working on the American atomic bomb development program.

The two scientists were scheduled to join the rest of their detonation observation team. Howbeit, their Jeep broke down in the middle of the desert.

In the distance, they saw a sudden fireball erupt into the sky. The bomb had gone off hours before its scheduled detonation, fatally irradiating everyone within the observation post.

Bright and Evans managed to repair the Jeep and tried to save their colleagues. But the dying men refused their help, since the radioactivity would kill their would-be rescuers. From the ruined post, the doomed researchers urged the two scientists to carry on for them.

(In the New Frontier continuity, Evans and Bright accidentally locked five colleagues in a bunker. They could not free them before the bomb went off. The pair barely made it to the minimum safe distance when it became obvious that it was too late).

In the original (pre-Crisis Earth-1) timeline this accident was likely meant to occur during, or shortly after, the Manhattan Project. Since similar moments for Flag and Grace take place late during World War Two.

In our proposed timeline, the catastrophic test could have been the real-world 1954 disaster at the Bikini Atoll, the Castle Bravo thermonuclear detonation  . Castle Bravo was the worst nuclear disaster in US history, with massive fallout  . It left several islands uninhabitable to this day.

In the post-Crisis revised timeline, it might have been the comic book version of the 1970 Operation Emery  series of nuclear weapon tests. If so, the Baneberry test would have gone wrong and released a large radioactive plume.

Dr. Evans died during the last mission of the Squad in Cambodia.

As he and Bright were trying to hold off a yeti with gunfire, the ice under them shattered. They fell into a huge crevasse. Doc Evans hit a ledge then shattered upon a rock.

(In the New Frontier continuity, Doc Evans dies earlier, during the case of the giant alien with the hunting pterosaurs. But this take can create problems if you’d like to feature the full Squad in flashback stories).

Like all Suicide Squad members he’s brave and dedicated to the point of self-sacrifice. He’s determined to serve even thought that will eventually mean death.

And like all Squad members he’s a calm, competent thinker who works well under pressure. He faces enormous odds without flinching.

You can just play him as a 1950s TV Scientist Dad. Unless of course you want to create a characterisation for him, so he can finally have one.

“Jess — there’s a close-up of the red wave with the strange shape at its core — brought to us by our televisor-analizor screen ! If the foam bombs failed to smother it — it means it will feed off everything tossed at it.”

“Skipper ! We’ve a plan to contain the red wave. But it means you’ve got to go down and have to hedgehop over it. And risk not being able to pull up again !”

“Hmmmmm — it might just work ! We’ve a special concentration of sodium manganate aboard !”

“How can we fight these high I.Q. dinosaurs if we haven’t the foggiest idea where they are ?!”

“Professor Duane’s notes show that he has been experimenting with chemicals to increase the size of living things !”

“Galloping galaxies ! We’ve flown inside a huge spaceship — using the cloud for camouflage !”

Mission X (High) plus those derived from his Credentials.