Professor Hugo Strange is an extremely resourceful man. A scientist, a philosopher and a criminal genius.

Strange is a brilliant criminal strategist who, thanks to his psychiatric training, specializes in knowing his opponents better than they know themselves. He is a very well-known psychiatrist and expert of the criminal mind, fully capable of deducing the secret identity of a superhero.

He is also a genius in many scientific fields, and actually is an expert in multiple diverse fields such as yoga, holograms, robotics and biochemistry. He can seemingly extend his scientific knowledge to cover further unusual fields as desired.

He is also a rather accomplished hand-to-hand combatant.

Professor of the odd sciences

Strange has knowledge of very unusual sciences and philosophies, mixing seemingly unrelated fields of science, and applying these in his criminal endeavors. This includes knowledge of Eastern yogic principles, unknown biochemistry, holography and robotics. Thus he will use different equipment almost at every occasion.

He is exceptionally adept at yogic techniques. He can adjust his breathing, even while being tortured, to slow down his metabolism enough to appear dead. Thus, he has used yoga to fake his own death on a number of occasions. In game terms, he uses Suspension as a Power Trick.

Secondarily, by employing unknown biochemical principles, he has created monster-like men who are 15 feet (!) tall. He uses Gadgetry, Medicine and Scientist with his Scholar to accomplish this. Anybody can be turned into such a monster, thus loosing control of their own personalities, and only being subject to the will and wishes of Strange.

The theory behind it is probably accomplished by a combination of chemically reverting the subject back to animalistic instincts, combined with certain brain-washing techniques. It is done via injection of a chemical of his own creation into the subject, and once he/she has turned the effect seems to be permanent (Batman considered it more humane to put them out of their misery).

Originally, the chemical required a full 18 hours to take effect, but the formula has since been perfected into only taking a few seconds to turn the subject. Previously it was possible to stop the transformation by injecting the subject with an antidote (which Batman himself developed). 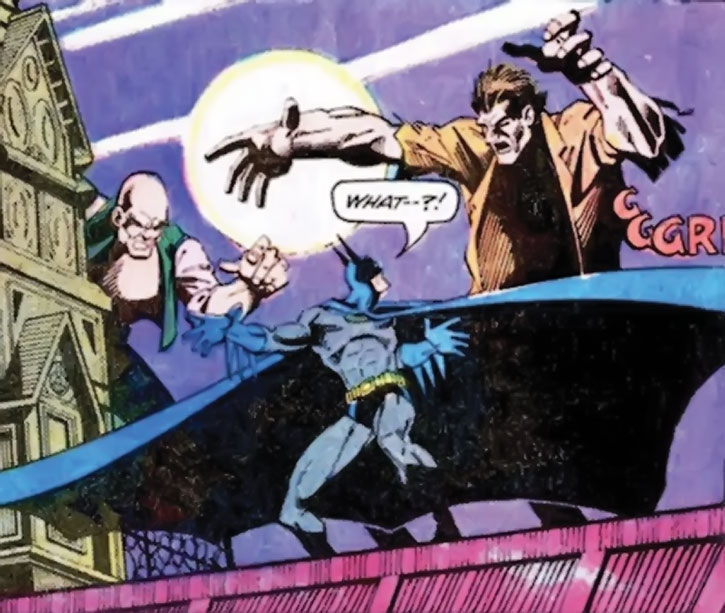 Furthermore, Strange is capable of creating very advanced holograms presented by miniature holographic projectors. Such projectors will be programmed to respond in a given way, for example, to play up a hologram when somebody enters a given spot in a room. He has recorded ghost-like holograms of himself, and others, with the intent of scaring and threatening the chosen subject.

The holograms also speak, and their words are carefully chosen for maximum effect against a given subject (in DC Heroes terms these use his Charisma Skill). To figure out how it all works and where the projector is hidden takes the skills of one such as Dr. Terrence Thirteen.

Lastly, Strange seems to be able to build life-like robots, indistinguishable from the real deal. These are fully programmed with a life-like personality. Not even the Batman could differentiate between the speech, appearance and manners of the robots and the real people. Strange regularly speaks with these robots as if they were living henchmen.

He has also been known to perfectly copy scenery and architecture, so the OV/RV of Perception Checks to see through these effects are, at least, 15 APs. Furthermore, he once created a duplicate of Wayne Manor and the Bat-cave in every detail, revealing Strange’s skills in architecture. It also suggests that he has vast hidden wealth to use.

The arch-criminal known as Professor Strange often wears a fine suit, sometimes with a fine top hat and a large cloak. 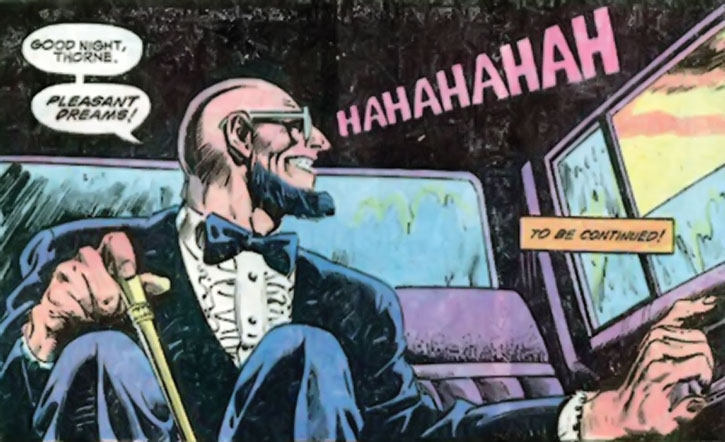 Although it is covered by his clothing, he has a very impressive build and physique, which, according to Strange, is the result of having trained into physical perfection. He could easily pose as the Batman himself (although his height and weight have varied with his appearances).

Other than that the professor is bald, wears thick, round glasses, that makes him look rather insane, and has a trademark thick, black beard.

Strange is one of the few criminals that knows the Batman’s secret identity. He did offer it up for auction, but then refused to supply the bidder with the answer because he found the bidder, the crime boss Thorne, unworthy. 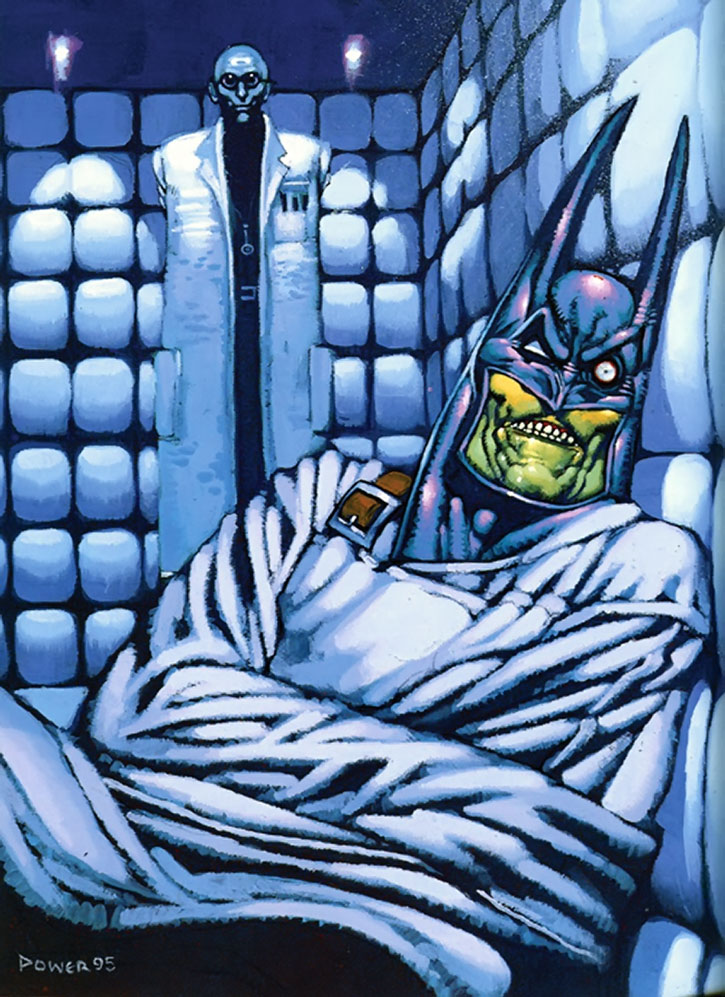 The reason was two-fold. First, he truly believes that the greatest threats of the Batman must also be worthy of being so. He believes this so hard that he was willing to gamble his life on the matter.

The second reason was likely that he was planning some type of double-cross against the bidder, particularly as he was planning to replace Bruce Wayne himself. But that never came to fruition as he proceeded with other plans instead.

It does, however, show that Strange regularly runs several agendas at once, and quickly adapts to new situations. Spur of the moment decisions have saved his life several times. He is convinced that none but he could do what he has done. Thorne tried to torture Strange for the information, but Strange faked his own death using yoga. 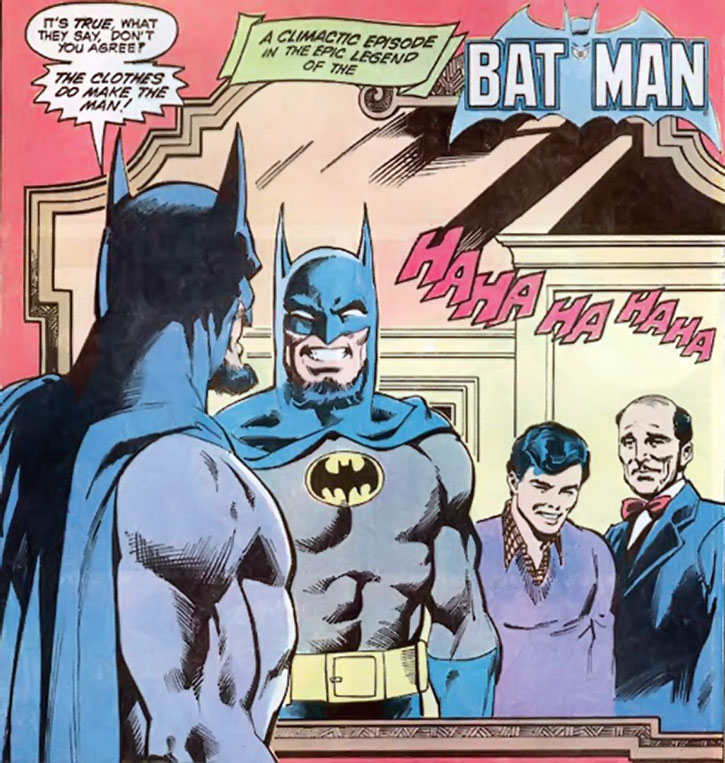 As to Thorne, Strange later arranged for a devious revenge by first driving Thorne mad by appearing to him, using holograms, as a ghost. He then set him up to be killed by his peers. Strange never forgets a slight.

Also, despite being in top-notch physical form he never endangers himself needlessly, but will send in monster men or androids to fight in his stead.

Strange greatly respects and admires the Batman. Upon learning of Batman’s true identity, Strange first planned only to rob Wayne Foundations clean. But as he was falling deeper down into his own insanity he became obsessed with taking over the Batman’s identity for himself. He would play the role of the Batman in costume before the mirror, while being adored by his laughing, robotic minions.

He planned the take over for several months. His use of science shows that he accepts no limits to his own knowledge or methods. He becomes an expert in any field that can aid him in his endeavors, to such a degree that he clearly rivals the top minds of the world in that subject.

Thus he is a master of, at least, biochemistry, holographics, yoga and robotics, and could quite likely extend his plans to include further unusual fields of science as needed.

No doubt, he is a twisted genius with few peers, that enjoys the suffering and pain of others, and he is also quite insane, fanatic and obsessive, really belonging in Arkham Asylum.

Psychological warfare is his prime choice of method in combating his enemies. He usually carries out his plans during several months with great patience. He tends to disappear for years at end, possibly planning and learning new sciences, before again resurfacing as a fresh threat with an old face.

He once duplicated Wayne Manor and the Bat-cave in perfect detail, and even went as far as making murderous robot doubles of Alfred and Dick Grayson to confuse Bruce Wayne and did manage to make him think that he was going mad. That said, he generally creates elaborate, highly detailed plans that work on his victim’s sanity as well as on their physical well-being.

(First words ever to the Batman) “Regained consciousness, Batman ? Good, now you can be awake to enjoy the entertainment I have prepared for you ! I have brought you here alive, so that you may know what it means to interfere with Professor Strange ! I’ll teach you… with a taste of the lash !”

“The Batman and I have come to respect each other quite highly in our encounters ! He is the reason I abandoned Gotham City for Europe after our last battle – and the reason I have returned after so many years of success there ! Only the Batman can offer Hugo Strange a challenge !”

“Spoken like a true fanatic, my dear Batman ! You may label my actions however you wish, but the fact remains that I have transformed every one of ’Doctor Todhunter’s’ patients into mindless slaves ! All those rich and influential people — totally dependent upon my good will — for the temporary antidote to their mutations ! Not one can afford to disobey my slightest whim — so each one brings me more victims from among his friends and my hidden power grows and grows ! Nothing can stop me now !”

“As always, you underestimate the vast scope of my schemes, Batman ! Evil, to me, is an end in itself ! No one can ever be safe while I yet live !” (The snake bites the Batman and he falls unconscious) “The green mamba — deadliest reptile in all the world ! Its bite brings coma in seconds ! Quick, Magda, the anti-venom ! I want this lawman stopped, but not dead ! I have plans for him !” (Batman awakens) “Yes, my friend — you no longer wear your mask. I saw my chance and seized it ! Your secrets are secrets no longer — Bruce Wayne !”

(Ranting) “Before you stands the Batman, dread stalker of the shadows — yet this is but a mask ! Beneath the fearsome cowl is Bruce Wayne, rich playboy dabbler — and yet this, too, is a mask ! For now, Professor Hugo Strange has replaced them ! From this moment on — I am the Batman !”

“It’s time. ‘Boss’ Thorne has been punished for his crimes. I have spread confusion and fear among my enemies. It’s time… time I assume my rightful place… as the one and only Darkknight Detective.” (puts on Batman suit) “It’s true, what they say, don’t you agree ? The clothes do make the man !” (Robotic minions laugh)

Connections:
The Secret Society of Super-Villains (Low), The Underworld (Low).

Equipment:
Professor Strange will usually carry one or two concealed hidden weapons on his body. He also has access to a large, hidden laboratory.

The return of the diabolic professor

Professor Strange is unusually adept at returning from the dead, unusually so even for a super villain. Of the Batman villains only the Joker rivals him in this aspect. He has fallen to his death, been beaten to death, been blown to pieces and so on, but, somehow, always manages to return, usually many years later.

Nobody knows how he does it, but when he does it, and he will, everybody always exclaims: “-You?! But you’re dead!” This then allows the good professor a snappy retoire, such as: “Am I, indeed? And what, then, does that make you, dear [subject]? [Shoots down or drugs subject]”. Since he was last seen he will have been making plans.

It is known that, at one point, Strange applied yogic techniques to slow down his metabolism to the degree that he would appear dead; treat this occasion as a Suspension Power Trick. Strange also regularly uses the Robot Double Gambit Schtick. Other, more extreme effects can be well represented by a GM, wishing to highlight this, by allowing him to temporarily use the Contingency Plans Schtick, or perhaps even the Invulnerability power.

Is the Professor of Psychiatry mad himself ?

Strange walks the fine line between genius and insanity, and takes detours to both sides. I think it is safe to say that he is a diagnosed schizophrenic. He regularly develops a psychosis or mania; he has, for example, had the Psychological Instability Drawback at varying degrees, as well as an obsession to take over the Batman’s identity (an Irrational Attraction).

He eventually regains his equilibrium, returning with new, even deadlier and more ingenious plans than ever before, only to begin the cycle anew. Depending on at which point he is in his walk between the genius and the insane, he might thus have a mental Drawback in the campaign.

Bonuses and Limitations:
Growth is Always on and Already Calculated into Stats (-1). 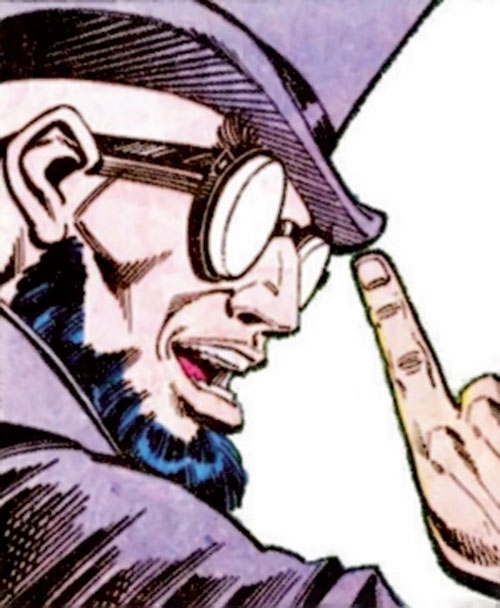 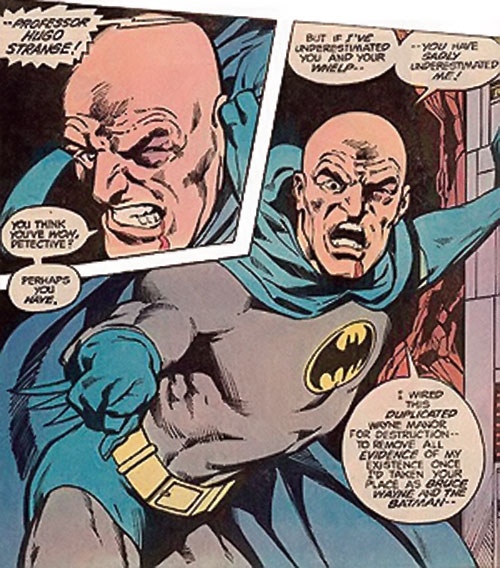 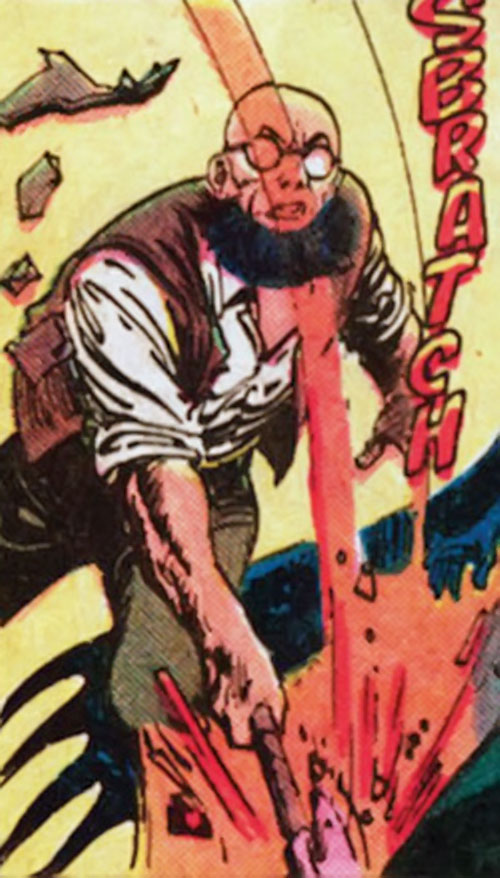 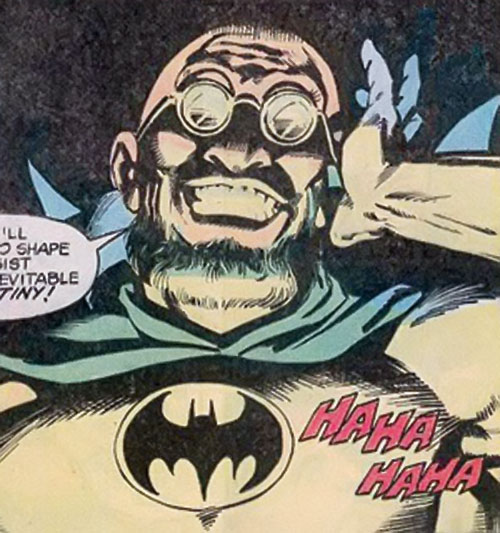