Hulkling has inherited Skrull shapeshifting powers from his mother. While his natural form is that of an ordinary looking human, as Hulkling he usually operates in a Hulked-out form, growing larger, his skin turning green, and exhibiting superhuman strength.

He can alter his body in either form, growing wings when he needs to fly, stretching his arms, growing claws on his hands when in combat, and he can regenerate damage quickly. His internal organs automatically move if they are in danger. He can change his appearance to resemble others, and has successfully impersonated others for extended periods. 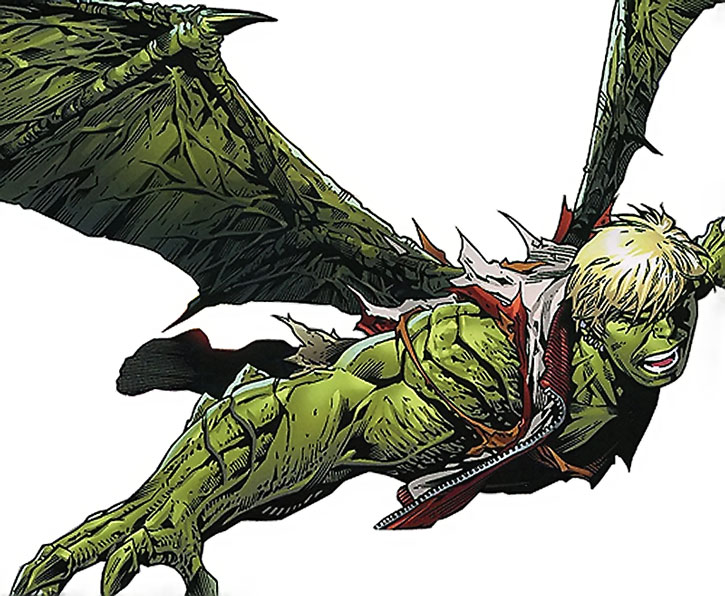 Teddy is the son of the Kree hero Mar-Vell and the Skrull Princess Annelle. He was given into the care of a Skrull who posed as his human mother, and grew up knowing nothing of his true heritage. When his shape-shifting powers asserted themselves, he believed himself a mutant, and kept them secret from his mother.

He used his abilities to try to fit in at school, although his powers and sexuality left him increasingly out of place. He became best friends with Greg Norris, class president and captain of the basketball team. It was to Greg he first revealed his powers and surprisingly enough Greg, instead of being unnerved, saw the advantages of Teddy’s gift.

Greg and Teddy pulled many cons and pranks by having Teddy change into popular figures such as Johnny Storm, Hulk and Tony Stark. 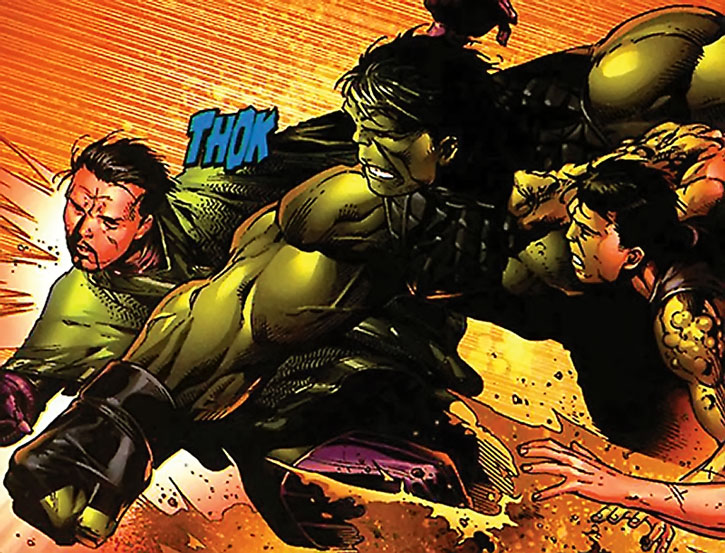 After hearing the Avengers had disbanded, Teddy was shocked, but Greg had an idea and the two went to the wreckage of the Avengers Mansion. Teddy was in awe of the place and respected it, while Greg went to business gathering up all he could to sell.

Teddy argued it was wrong to steal and urged Greg to stop. Greg merely pointed out that Teddy stole people’s identities all the time, and that no one would believe Teddy over him if he called the cops. At that point Teddy used his shape-shifting to intimidate Greg who then stepped down and left.

After Greg left Teddy encountered Iron Lad, who was gathering teens who had links to the Avengers. Adopting the codename Hulkling, Teddy and new teammate Wiccan (Billy) quickly discovered a mutual attraction, and began dating.

He learned the truth about his heritage when the Super-Skrull arrived to kidnap him. He also lost the only mother he’d ever known. He had little interest in his claim on the Skrull throne, preferring to stay on Earth with Wiccan. He scattered his foster mother’s ashes in the memorial section of the ruins of Avenger’s Mansion. 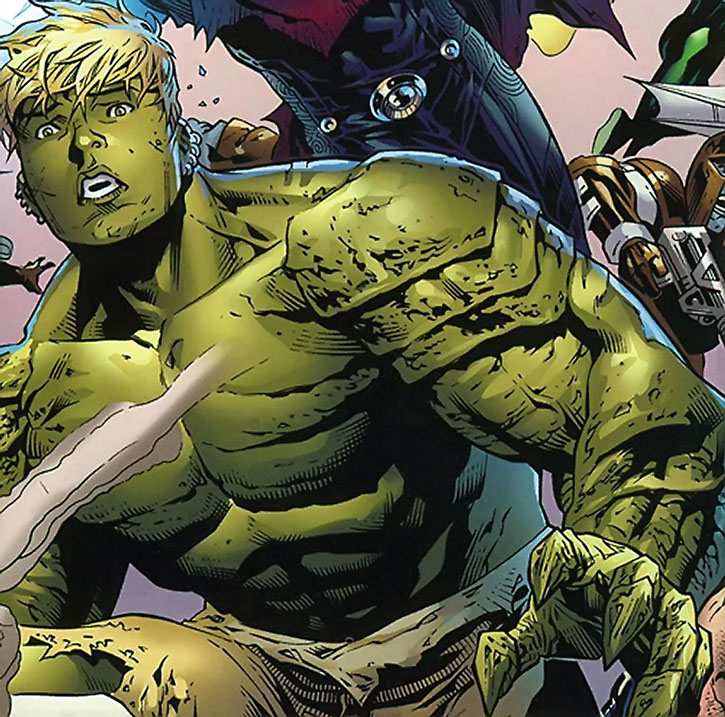 Hearing that his father was alive again, Teddy managed to hunt him down and introduce himself. Captain Marvel was initially resistant to the news, but they did begin to form a kind of relationship.

Neither of them were aware at the time that it wasn’t actually his father, but a Skrull programmed to believe he was. It’s unknown whether Teddy learned of this.

Following the dissolution of the team, Teddy was supportive of Billy as he tried to come to terms with his mother’s return. They were flirting with the idea of marriage when summoned to Avengers Mansion.

Impulsive and excitable, Hulkling is usually easygoing, polite and respectful. He only really loses his temper after extreme provocation. He happily follows orders, without always thinking through the consequences of his actions, and frequently trusts his feelings to lead him. 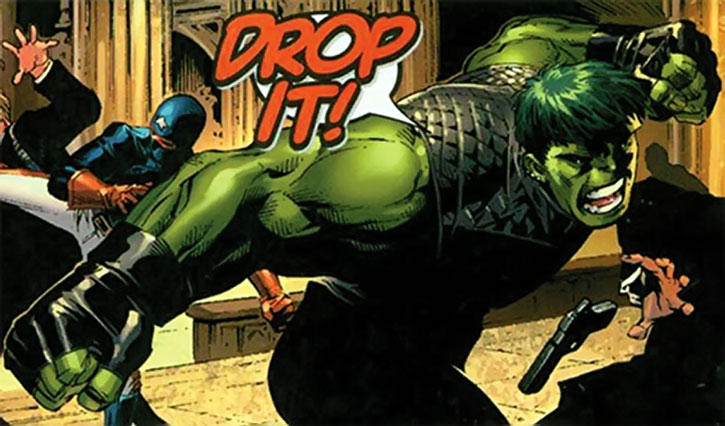 While he sometimes adopts an aggressive persona to intimidate when ’Hulked-up‘, he rarely actually gets angry, usually only at serious threats to those close to him, particularly Wiccan.

“I don’t Hulk-out, if that’s what you mean. At least not any more than most 16 year-olds.”

Hulkling is a clone containing the genetic material of the Martian Manhunter and a daughter of Thanagarian aristocracy, created by Professor Ivo, and placed into the care of an android servant who pretended to be his mother.

As Hulkling he generally presents a teenaged Hulk appearance, growing larger and turning his skin green. In this form he has the Physical Stats in parentheses, his Growth is always on (and is reflected in the heightened stats), and he has the Strange Appearance Drawback.

This write-up assumes that he only has above normal strength in human form, but super-human strength in his Hulkling form, since he always seems to switch when he needs to use his strength. 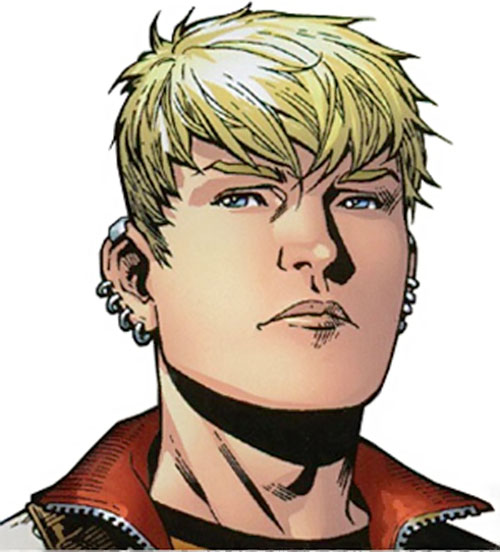 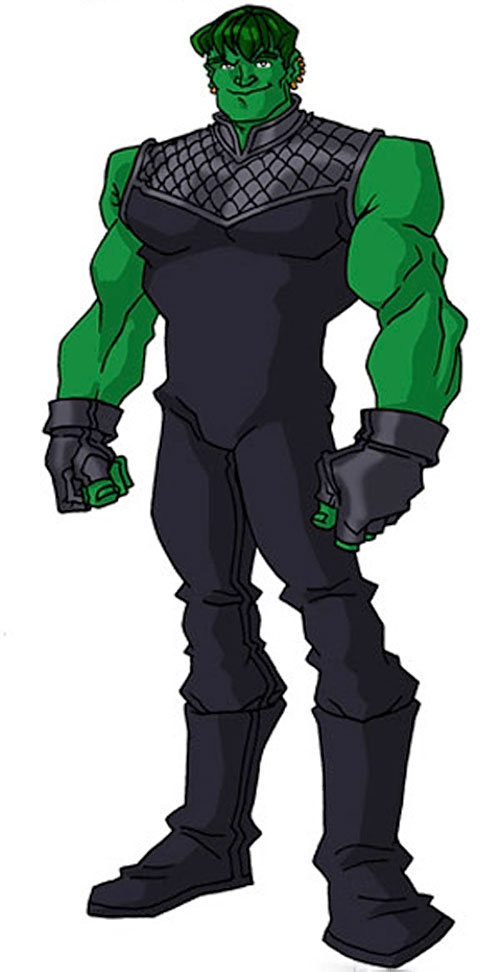 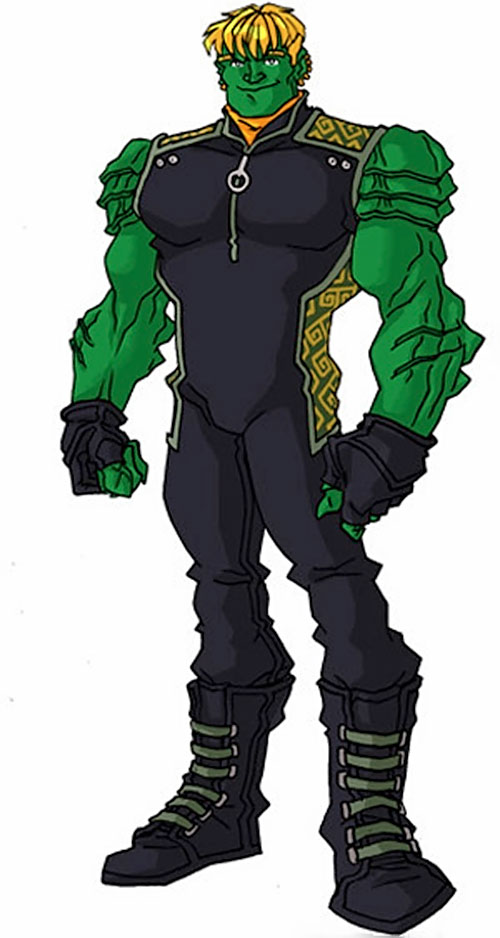