Human Fly was a brief-lived 1977 Marvel book. It held for 19 issues – “brief-lived” was different back in those days.

The main schtick was being based on stuntman Rick Rojatt, who developed the Human Fly look during the 1970s. Hence the tagline quoted above. However, Rojatt soon retired after a stunt accident, leaving the comic book version of himself soldier on for a bit.

The Human Fly may well be the greatest stuntman alive. He trained his shattered body to peak perfection when doctor’s told him he would never walk again. Over 60% of his skeletal structure has been replaced or reinforced by steel parts which seem to aid in his resistance to injury.

His loyal aid Locke provides him with special equipment that aids him in his death defying stunts (and consequently adventuring). Which have ranged from jet boots (Flight), small explosives in belt (Bomb), to built in Mag-clamp electro magnets and suction cups (Cling).

After a head on car accident on a North Carolina road one night in ’71, the man who would be the Human Fly was alone. He had lost his wife and children, and had been left crippled.

Told he would never walk again, the young man not only walked but whipped himself into peak physical condition.

Wanting to encourage others to overcome their handicaps, he began life anew as a stuntman/superhero.

Unmasked his features were always enshadowed to the reader.

What others would see as a death-wish, the Fly sees as a glorious reaffirmation of life. While he constantly protests being a crime-fighter, it was pointed out by a close friend that he only seems truly content in the middle of the action. In short he is an adrenaline junkie.

But one with a heart of gold. He generously donates all profits he makes as a stuntman to charity, and genuinely wants to help the unfortunate. He is more than willing to let other heroes deal with the bad guys if innocents are present. Seeing to their safety first before (inevitably) springing into action.

While very public about his story and “origin”, he is EXTREMELY secretive of his identity (unknown to even the reader). He was only out of costume in his series’ 19 issue run once. His close friends Ted, Blaze and Arnie are in on his Secret ID though.

“I *will* move again! If my mind is whole then my body can be made to respond !”

Heroes can easily be at the big ’comeback‘ show of the Fly’s which inevitably would go awry with nefarious interference.

Bonuses and Limitations:
Skin armor does not apply against piercing and energy attacks.

The Human Fly often applies this Scholar to both his Acrobatics and Vehicles, receiving a -2 CS bonus to the OV/RV to Action Checks for these Skills when he is performing a planned stunt. 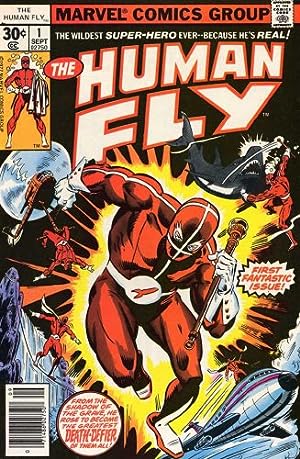