This dated, silly villain fought Aquaman that one time, in 1960. He was goofy enough to also show up in the cartoon-based Super-Friends continuity during the 1970s.

Apparently, the Human Flying Fish resurfaced years after these notes were taken. I’d assume/hope that it’s a different version of the character, though.

The Human Flying Fish can breathe both air and water. His swimming ability rivals Aquaman’s, and ability to leap and glide like his namesake makes him very difficult to catch.

Vic Briggs was a champion swimmer who turned to crime. His partner, the evil surgeon Dr. Krill, performed operations that turned Briggs into the Human Flying Fish. He gave Aquaman a good run for his money, but eventually the Sea King outsmarted his foe.

Later, the Human Flying Fish took on a teenage sidekick named Sardine. He helped form a villainous team called the Super-Foes. Both associations were short-lived, however, as the team was soon captured by the Super-Friends.

Vic Briggs looks more like an ex-boxer than an ex-swimmer, with his stocky build and rather brutish-looking face. He has short, straight black hair.

As the Human Flying Fish, he wears a gold bodysuit and skullcap with a fish scale texture. The trunks and lower torso of the suit are covered with white and purple stripes, and he wears purple boots. The orange glider-wings strapped to his arms and back are scalloped to resemble the fins of a flying fish.

Briggs is a straightforward, uncomplicated crook. He’s good at taking orders, either from his pal Dr. Krill or from The Penguin (who was the head of the Super-Foes).

On his own, he’s not too swift.

“Now for another perfect getaway !”

Bonuses and Limitations:
HFF can Jump out of the water as if it were solid ground. 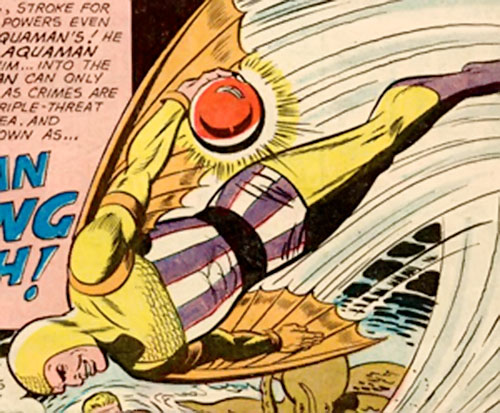