Among the first 100 superheroes there is one that is notable not because he was particularly important, or remembered, or well-written or even original (although he was often well-drawn). Rather he is interesting because he appeared as a normal adventurer before he was a costumed superhero.

In issue six [of Champion Comics] readers meet lanky Texan soldier of fortune Duke O’Dowd who joined the Foreign Legion  “in search of adventure” (and possibly dysentery). By issue seven we learn he’s a crack pilot and stunt man.

”After several months of soldering he longs again for the soaring surge of a plane beneath him,” says the opening caption of his Champion No.7 story. ”He applies for a transfer to the legion’s flying squadron.” This action proves to be a key move in Duke’s life.

Although O’Dowd stories are crammed full of adventure, you couldn’t tell that to Duke. He’s impatient. ”If something doesn’t happen soon, I’ll go crazy. I’d have gotten more action if I’d returned to the States and joined the National Guard,” he says.

He gets his wish—in a spectacular barnstorming stunt he lassos the commandant’s child dangling from a hot air balloon. Then he’s in an aerial dog-fight. Then he and the girl are prisoner in Bedouin bandit Sheik Tamah’s mountain citadel.

After escaping in improbable fashion and again saving the tyke he returns to duty and requests a discharge. The young lass has made this man of iron homesick. Because he saved the commandant’s daughter O’Dowd is released faster than a soldier declaring himself gay.

Back stateside… or perhaps not

Duke plans to visit Texas to see his kid sister. A colleague agreed to fly him as far as Manilla. The poor sap, Kerry Flynn by name, could not know he sealed his fate. ”Duke O’Dowd has a new adventure next month,” said the last panel. There is no indication anything special was coming. It appears the editors had no idea of the big changes coming in the next issue.

Champion Comics No.8 starts with a whiz-bang—a colorful cover by Joe Simon doing his best Jack Kirby imitation. An unidentified hero wearing a domino mask, a cape tied around his neck, shorts, boots (all green) and a gadget-laden belt, punches an ugly, bearded man wielding some formidable futuristic weapons and flying a sky-car.

In the background can be seen the top spires of a castle, Eastern-looking with its onion domes.

A banner at the bottom declares that stories inside include Neptina, The Champ and Duke O’Dowd. Manilla-bound O’Dowd and Kerry Flynn are three days in and flying through the Himalayas. The story is signed George Appel, a name unknown to us but he probably drew Duke in issues No.7 and possibly 6.

In a nicely-drawn sequence a tornado suddenly whips up the boys’ plane. ”My nose is bleeding from the altitude,” said poor, doomed Kerry. They’re batted around for half an hour before careening in. “Kerry Flynn met a quick, merciful death at the crash,” it said.

Duke is met by two men wearing what appears to be blue pea-pods on their heads. ”The only outsider to ever succeed in entering Bayakura, the lost city !” says the fat one to his colleague, reminding him they are lost. ”The Great Deliverer, who swooped in like a bird, just as the legend predicted.”

Bayakura is a Lost Horizon -like hidden city. Their inhabitants speak six languages, including English. The two men literally carry Duke on their shoulders to the gate. Guess that friendly Texas manner pays off.

As they carry him through adoring throngs, the evil Frango, heir to the office of supreme ruler, plots Duke’s demise. Perhaps the name “Frango” was inspired by Spanish leader Francisco Franco, who came to power a year earlier.

Leng Lu, the city’s best, brightest and eldest, is dying. Because Duke crashed in their valley, their religion dictates they must give him “unheard of powers that only our advanced knowledge of science and invention have made possible !” Good thing Bill Gates didn’t crash there.

After beating up some of Frango’s henchmen Duke visits renowned scientist Wah Lee. Wah Lee is like the Himalayan version of James Bond’s Q as he lavishes him with gadgets. ”This wonder belt contains an ato motor. Its radium emanations, exploding atoms will rocket you through space,” said the wise man.

The belt has a battery that gives the wearer super strength (it keeps going…) and creates a “contra-magnetic field” to repel metal. Duke dons the Bayakuran togs, bright red jumpsuit, blue pod hat, booties and all.

Duke wastes no time thwarting Frango’s plans to loot the castle. He turns his new “Yar Gun” on the swine. After saving the day the restless Duke says he is off again, thanks for all the boss’s gadgets.

Nowhere is seen the cover costume nor the name “Human Meteor.” It’s likely that Joe Simon designed the costume (it looks a bit like his Firey Mask for Daring Comics No.1, December 1939), and may have supplied the character idea and even wrote stories.

We have not seen Champion No.9, but by No.10 he has his proper costume (mistakenly colored red) and is drawn by Robert Turner, also unknown. He’s one of the few superheroes who flew with his arms to his side, no doubt to make him look more “meteor”-like.

He also has more toys. On his wrist is a “mentalephone” with which he can speak and see Wah Lee. And he has replaced his Yar Gun with an “explosatom” gun. This is an atom-blaster and paralyzer ray. In issue 11 he is joined by Toby, an orphan shoeshine boy (aren’t they all) who resembles a miniature Duke (sans costume).

In later issues the Duke would enjoy fine art from the Will Eisner-Lou Fine school. Even the Reed Crandall lent a hand (see the cover of Champ Comics No.15).

Duke ran in Champion Comics then Champ Comics through issue 24, April 1943. Duke disappears for 50 years until Roy Thomas resurrected him for a four-issue Invaders mini-series—this time as a villain.

In the Invaders mini-series, Duke O’Dowd went from being a Texan American to a Boston Irishman. As an Irishman, he was opposed to England and therefore willingly joined the anti-British Battle Axis.

In this appearance, he seemed to forgo any gadgets, except possibly his belt. The way he talked, however, gave the impression that his strength and flight were innate secrets that he learned from Bayakura rather than devices. He would often mention his “atomic punch”.

Despite changing costumes frequently, he was most often seen wearing only green boots, green briefs, yellow bracelets, a yellow belt, and a green cape, as well as a black domino mask.

In his Invaders appearance, he switched his bracelets for a pair of green gloves. As an comic book Irishman, he, of course, has red hair.

“If these things really work, there’s no limit to what I can do !”

Source of Character: Golden Age comics published by Alfred Harvey(Worth) Publishers. He also appeared in all 4 issues of the Invaders miniseries published by Marvel. 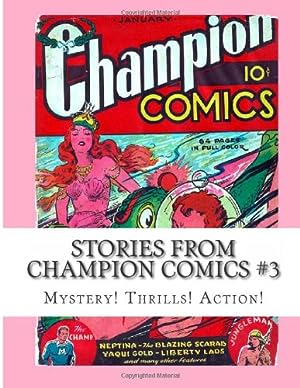