Blackhawk was a surprisingly long-lasting series about a colourful team of Allied military pilots. It started in 1944, and was part of the Quality Comics IP that migrated to DC Comics. The series returned in 1957, just as the Silver Age  wa sabout to begin, and hung around until 1984.

The Human Starfish appeared in 1963. As can be guessed, the series had been “modernised” to resemble the cheap, goofy sci-fi that dominated in 1960s DC books. It was… peculiar. For starters, the Blackhawks fought people called “the human starfish”.

After drinking the “liquid” (never called a serum or anything else) that changes him into the Human Starfish, Dandy Craig has “the same strength as the star fish animal he resembles…magnified many times !”

His strength (about “Class 25”) is sufficient to rip the sides off an armored car, toss the loot to his pals on top of a building, and to tear a section off of the side of an ocean liner.

In close combat, he always seems to go first. He also manages to effortlessly grab four of the Blackhawks before they can do anything.

The Human Starfish appeared only in the third story in Blackhawk #190, having been upstaged by the Crimson Baron and Bravo the Blackhawk chimp. He first came to the attention of the Blackhawks when “hysterical calls” from Flood City report a monster slithering around the sides of buildings in the middle of the day.

The Blackhawks arrive in time to see the Human Starfish rob an armored car in front of a bank. He takes several guards hostage and then loots to his heart’s content (tossing the money to his pals up on the roof of the bank. The creature then escapes by wriggling down the sewer drain.

He later is found plundering an ocean liner. But several Blackhawks arrive in time to stop him. They plug up the hole in the side of the ship that he made with their own boat.

Thinking that this has trapped him, Blackhawk, André, and Olaf climb up the side of the ship. They find him in the ship’s gym. They are unable to stop him from escaping, but watch amazed as he changes into a human before he jumps over board. His pals are waiting for him there, in a boat of their own.

At his secret lair at the Seaside Fish Hatchery, Dandy Craig explains his secret origin to his criminal cohorts. Having taken a janitor’s job (under the alias Edgar Wilks) at an oceanography lab in order to hide from the cops, Dandy accidentally drank a waste liquid that he was supposed to dispose of. He then turned into the Human Starfish, but changed back to normal hours later.

Commenting on how little remains of this liquid, Craig is soon tracked down by the Blackhawks. But theyr arrive too late to stop him from drinking his liquid again and becoming the Human Starfish.

After effortlessly defeating one wave of Blackhawks after another, Craig is amazed to suddenly see another Human Starfish! Blackhawk has drunk some of Craig’s liquid. Now on equal terms with him, is able to beat the criminal.

After having defeated Craig and having changed back to normal, Blackhawk quips, “Now let’s return the loot that four-armed creature stole…and go fishing, men ! Ha, Ha !” Yeah, that Blackhawk, what a kidder.

Future plots could be similar to classic Clayface II plots. A quest to find more of the liquid, an attempt to synthesize the liquid, or possibly even a delayed side effect of having drunk it so many times, namely Craig becoming trapped in Human Starfish form and seeking a cure.

He has orange scales, four starfish arms, purple briefs with a star-shaped belt-buckle, and webbed feet.

He’s a basic thug, though one who definitely enjoys his work, making wisecracks as he fights. For example, when encountering the Blackhawks in a ship’s gym, he tosses barbells, balls, and a punching bag at the Blackhawks, saying, “Haw! Have some gym equipment—you’ll have to be in shape to tangle with me! Ho, ho…”

“You came looking for trouble, Blackhawk — here it is !”

Drawbacks:
Strange Appearance ; Loss Vulnerability: a few hours after drinking the liquid that turns him into the Human Starfish, he will change back to normal (see Alter Ego). 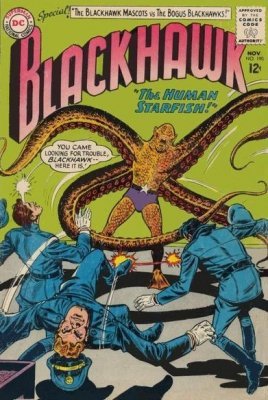