An Olympic-level athlete, the Huntress was a mistress of many forms of physical combat, armed and unarmed. She was also a skilled criminologist, her superior detection skill having been taught to her by her father. She further possessed unusual breaking and entering skills, taught to her by her mother.

The weapons in her arsenal included a collapsible crossbow pistol stored in a boot-sheath, a dagger, and various items in her utility belt or bag. Like her father, she refused to use guns.

(All of the Huntress’s pre-Crisis history takes place on pre-Crisis Earth-2 ).

Helena Wayne was born in 1957 to Bruce and Selina Wayne of Gotham City, aka Batman and Catwoman. Helena was raised in a loving family, nurtured by ancestral wealth and the rich experiences of her adventurer parents. Batman was then in semi-retirement, and Catwoman was fully retired.

The Wayne scion was educated at the best of schools and vigorously trained to superb athletic prowess. Although her parents had no plan of turning her into an adventurer, they thought it best for her own growth and well-being.

Helena’s education progressed in leaps and bounds. She finished college at age 18. Helena followed the family tradition and pursued a law degree. Upon completion of law school (finishing at the age most people graduate from college), she joined the firm of Cranston & Grayson through connections with Richard Grayson, the former ward of Bruce Wayne and the former Robin.

Loss of a mother

In 1976, “Silky” Cernak blackmailed Selina Wayne into donning her Catwoman gear once again, to rob the Gotham Civic Center. He did so by using fraudulent evidence that the Catwoman had committed murder in the 1950s. During the course of the robbery, Batman intervened.

In the resulting conflict, a stray bullet struck Selina Wayne. Unbalanced by the impact, Catwoman fell several stories to her death. 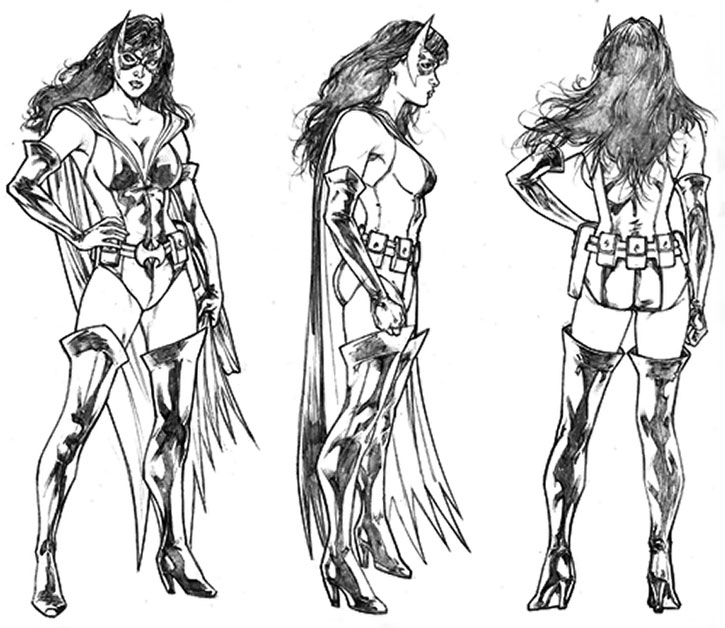 The loss of his wife shattered Wayne, who burned his Batman costume on her grave the night of Selina’s death.

Equally traumatized, Helena swore an oath of vengeance. She fashioned a costume for herself as well as a set of a personal weaponry derived from her parents’ personal stock. She tracked Cernak down, ultimately bringing him to justice.

Committed to her pursuit of justice in her new costumed identity, she code-named herself “the Huntress”.

Shortly after his wife’s death, Bruce Wayne fell under the sway of the Psycho-Pirate. The villain convinced him to use his office in an attempt to brand the Justice Society of America as outlaws. The Huntress followed this case, observing in the shadows when the JSA finally resolved the situation.

According to some accounts, Bruce Wayne later donned his Batman costume one last time and laid down his life to protect Gotham from a super-powered criminal. The Huntress, along with the JSA, avenged his death.

Privately, Helena Wayne remained an active member of Cranston, Grayson & Wayne – although she devoted far more energy to her career as the Huntress than to lawyerly pursuits. She confronted a number of enemies, including the Thinker, Solomon Grundy, and the Joker.

In the early 1980s, she became a police liaison as a result of her association with companion Harry Sims. She briefly associated herself with the fledgling super-group Infinity Incorporated but remained a member full-time of the JSA.

During the Crisis, the Huntress survived the initial confrontations with the minions of the Anti-Monitor. After the merging of five parallel Earths, the Huntress discovered that Helena Wayne’s life no longer existed. The graves of her parents had vanished, and her life as she remembered it never occurred. 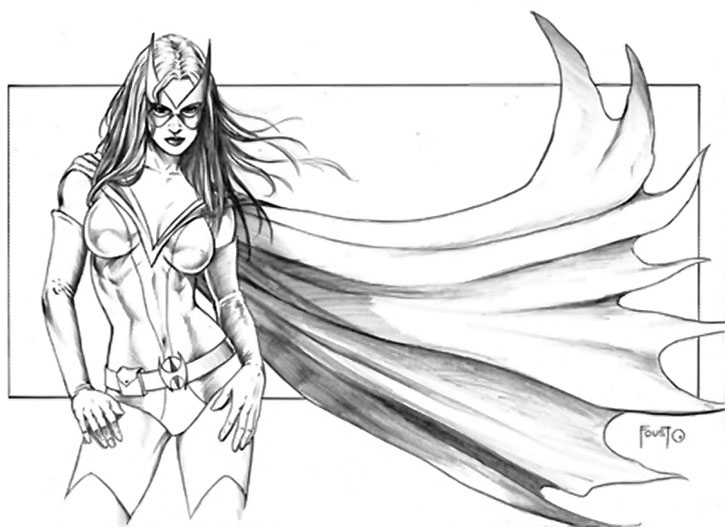 Just before the end of the Crisis, the Anti-Monitor’s minions attacked once more. While attempting to protect several children, the Huntress was gravely injured. Despite the protection of Robin, the minions closed in and buried the Huntress, Robin, and Kole of the New Titans under a mountain of debris, apparently slaying them all.

As the timeline of the new universe stabilized, the memory of the Huntress and all she had been faded from existence. The post-Crisis universe no longer remembered the existence of Helena Wayne or the Earth-2 Huntress.

It should be carefully noted, however, that no body was ever found under the rubbles. During a later JSA series, it was stated that the corpses were found, but it is probable that this story is no longer in continuity. And Kole has been sighted since.

The Huntress, as befits the daughter of Batman and Catwoman, inherited much from both her parents’ personalities, but remained very much her own woman. Helena had a grim and secretive side, slowly and methodically planning contingency activities months in advance as her father was prone to do. But she also possessed the cunning of her mother.

However, Helena Wayne was also extremely warm, caring, and open to those to whom she was close. She made peace with her demons far earlier in her life than either of her parents could.

“There was only one man who could be the Batman, Dick, and my father is dead.”

These stats are for the Huntress at her peak. For a younger Huntress, lower DEX and DEX skills by one point. She had about 45 or 50 HPs during her All Star Comics adventures, 60 by the Time of Infinity, Inc. and 75 in the last few years of her existence.

Assembled by Sébastien Andrivet, based on advices and descriptions by Sean MacDonald, John Colagioia, John M. Kahane and VBTusky. History almost completely based on the one by Icicle . 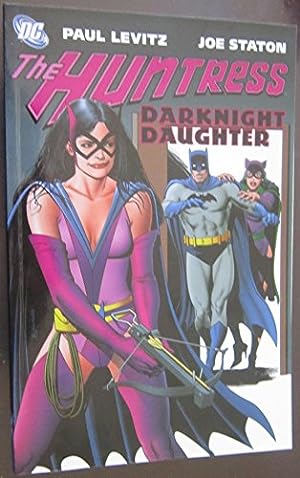 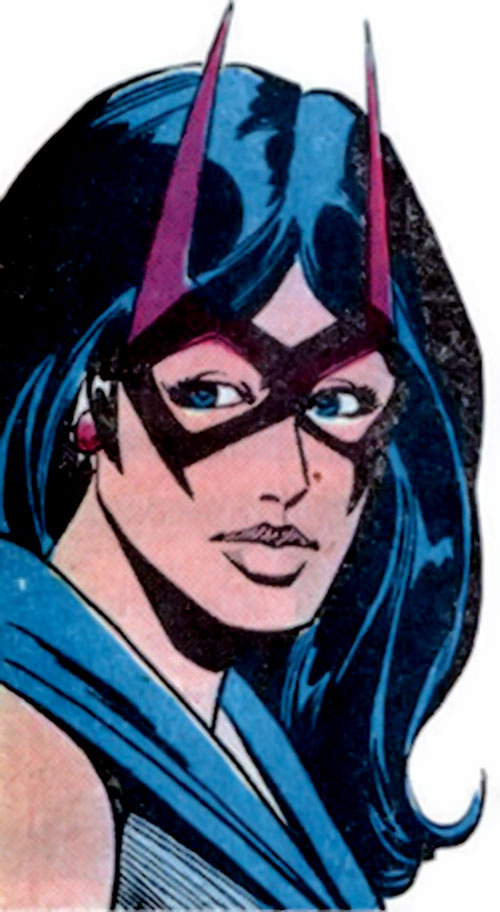 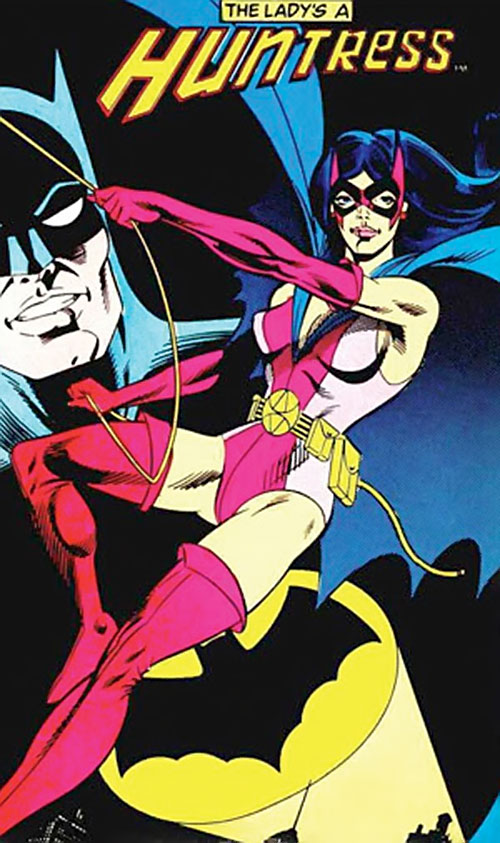