The nature of the Huntsman is unrevealed. One suspects that he’s the shade of a great mortal hunter, whom Zeus occasionally empowers to hunt for his pleasure. That would explain why the Huntsman has no superhuman power without his Zeus-enchanted staff (though he knows some effective magics, and has heroic strength), and why he’s also a servant of Pluto/Hades.

Through the enchanted staff, the Huntsman can wield a sliver of Zeus’ power.

The signature use of the Huntsman’s Staff is a blast of magically-induced terror, making the quarry run in abject fear of the Huntsman. This fear proved potent enough the repeatedly affect Hercules himself. The Huntsman will then stalk the frightened target, reapplying the fear effect as necessary for the sadistic pleasure of the watching divine types.

Beside fear, the Huntsman has chiefly used the Staff’s power to summon creatures, but he’s a versatile operative. Examples of his magic include :

The Hunstman fearlessly engages superhumans, so we’ve assumed a level of superhuman durability conferred by the staff. That wasn’t actually witnessed, though, since he never got hit in the stories. It is possible that the staff also enhances his strength.

The Huntsman first appeared after Hercules got into a verbal fight with Zeus. That one was over his proud, independent nature and his longing to be active on Earth and not in Olympus. Goaded by Ares and despite the protestations of Hebe, the angry Zeus summoned the Huntsman. This hunter had been inactive for centuries and yet was remembered by most Olympians.

Clash of the titans

The Huntsman was sicced after Hercules on Earth. He swatted aside the Avengers as he stalked the Prince of Power. However, Hercules became able to sense the hunter due to having exposed to too much fear (?). Therefore, the Huntsman could not catch him. The stalker changed his plan. He would use another powerful half-breed, Namor the Submariner, as his catspaw.

The two figurative titans fought until Hercules accidentally hurled a gigantic boulder toward a village. Saving the villagers was enough for Namor to shake off the mind control. But the Huntsman was already upon them, and summoned a trio of mythicals.

Teaming up, Hercules and Namor overcame their gigantic foes. Nevertheless, the Huntsman seized the diversion to sneak upon Hercules and touch him with his staff, draining his strength. Namor responded by knocking the staff out of the Huntsman’s hands with a projectile. This depowered the Huntsman and banished his summoned giants.

Before Hercules could do something violent to the Huntsman’s skull, Zeus appeared. He declared that Namor’s courage had shown that Hercules’ defense of mortals was worthy. He then made nearby mortals, including Namor, forget about the incident – and teleported his Huntsman back to Olympus.

With only the foggiest notion of what happened, Namor broke the discarded powerstaff in twain and swam yonder. Forsooth !

Months later, a complicated plot by Pluto/Hades resulted in Zeus being forced to send the Huntsman after Hercules once more. This time, it was to force the Prince of Power to marry Hippolyta. The Huntsman, with the help of an Erebos-forged flaming spear, narrowly defeated the Champions. Then he took Hercules and Aphrodite to Olympus. They were to be forcibly married to Hippolyta and Ares.

The Champions soon came to Olympus. The first person they encountered was the Huntsman, whom the Angel took down. He did so by dive-bombing on him, grabbing the staff and taking such a sharp turn that the Huntsman could not hold on his weapon. The stalker was thrown head-first against a stone wall.

The Champions prevented the marriages, and the Ghost Rider convinced Zeus to reject Pluto’s machinations.

A grim, somewhat sadistic stalker. He is entirely devoted to Zeus and Hades. However, he becomes suddenly much, much less confident when deprived of his powerstaff, unless he’s just facing mortals. Originally he spoke in pseudo-Shakespearian “I say thee nay” English, but later switched to modern American English.

The Huntsman really dislikes being on Earth. He feels that he should tread the grounds of Olympus instead of baser soil. If a hunt drags on for too long he will try to find innovative means to end it quicker so he can leave.

By association, he dislikes mortals.

“It hath been… long… since thou… summoned me, Lord Zeus ! What quarry shall I seek for your pleasure, Lord ?”

“You cannot hide behind those puny mortals, O son of Zeus ! The Huntsman will always find you, where e‘er you run ! Now quake in fear, quarry ! By my powerstaff, I bid thee… FLEE !!”

“Too long hath the Huntsman of Zeus sojourned upon this base-born planet ! ’tis my destiny to tread ’midst marble halls of timeless Olympus, not dwell fore‘er here below ! Yet, here must I remain… till my quest be ended !”

“Thou dost possess power enow to o’ertake him — to hold him until I may smite him with my staff !”

(When disarmed): “No — no ! Have mercy, o Prince of Power ! Zeus… Almighty Zeus… Protect thou thine underling !”

“Bah ! What use hath the Huntsman for weddings or Machiavellian schemings ? My purpose is the hunt ! My prey, errant Olympians !”

Equipment:
Staff of the Huntsman [BODY 30 SPI 20 /BODY/ (Hardened) 13, EV 04 (06 w/STR), Sorcery: 18 ; Loss Vuln: when separated from the Huntsman, the Staff has but the following stats: [BODY 06, EV 04 (06 w/STR)], Loss Vuln: All Powers are Contingent on the will of Zeus, see below, Note: It is quite likely that the power of the Staff can only be accessed by the Huntsman, Note: The staff is electrically conductive, Note: The staff can apparently be recreated, presumably at will and by Zeus].

Rituals:
The Huntsman knows some magic, which he can use even when deprived from his staff. He will usually use those spells to recover the staff, though casting them will probably require Hero Points. The documented rituals are:

Yonder beasts of Antiquity:
A common tactic for the Huntsman is to use his powerstaff to summon forth creatures drawn from ancient Greek myths. To summon or unsummon, he must say a couple of verses.

The first creature he summons is usually a Shadow-Hound. Those are obscure beasts from the realm of Boreus, but he seems to like them. He will usually hunt with one at his side, summoning it as he leaves to stalk his prey. 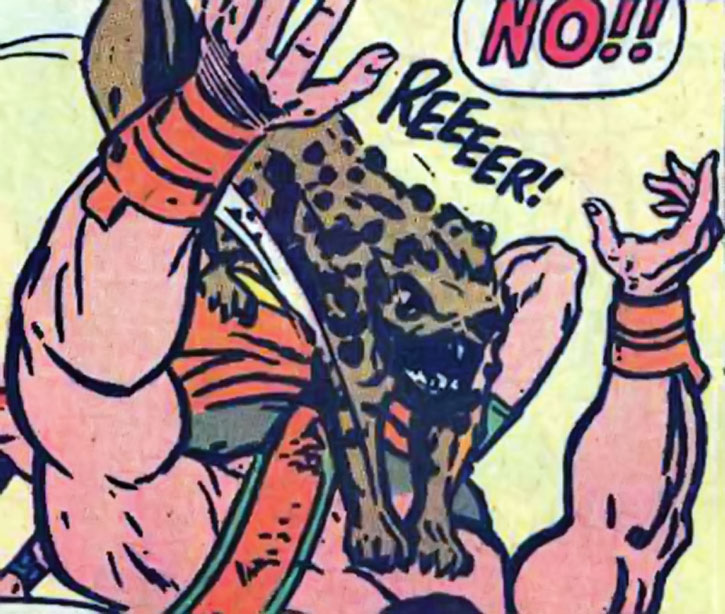 Early on, he summoned the Sirens (“Obey my word, ye lovely throng / let now be heard, the sirens’ song” for the summon, and “Sisters of the siren song, ye whose call may not be spurned / not on Earth do ye belong ! To Olympus be returned !!” to unsummon).

This mostly amounts to a special effect for using Control and/or Hypnotism through the staff’s Sorcery. 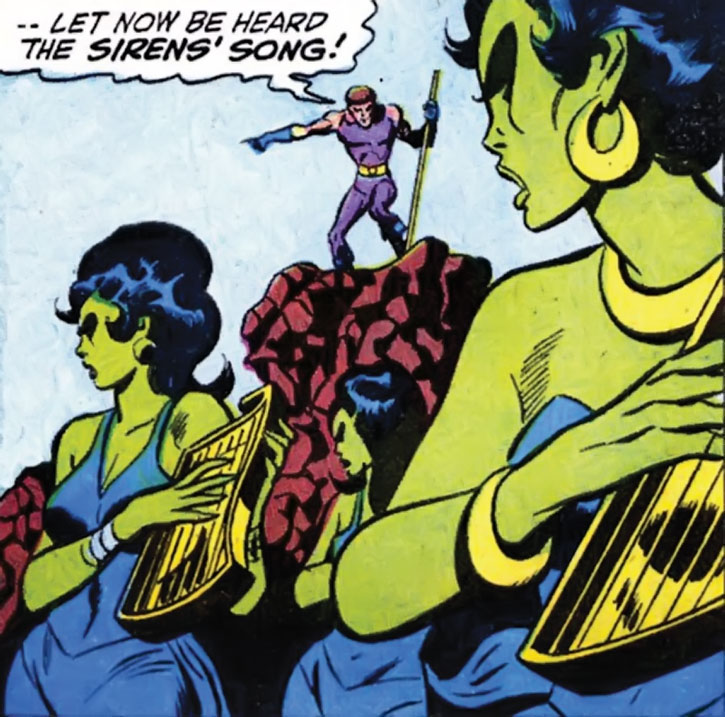 He later conjured Polyphemus as well as Charybdis and Scylla, and seemed to further use his Sorcery to confer a half-dozen APs of Growth on each creature — see the WORG entry for “Lesser Cyclops”, which includes notes about Polyphemus and his ilk. 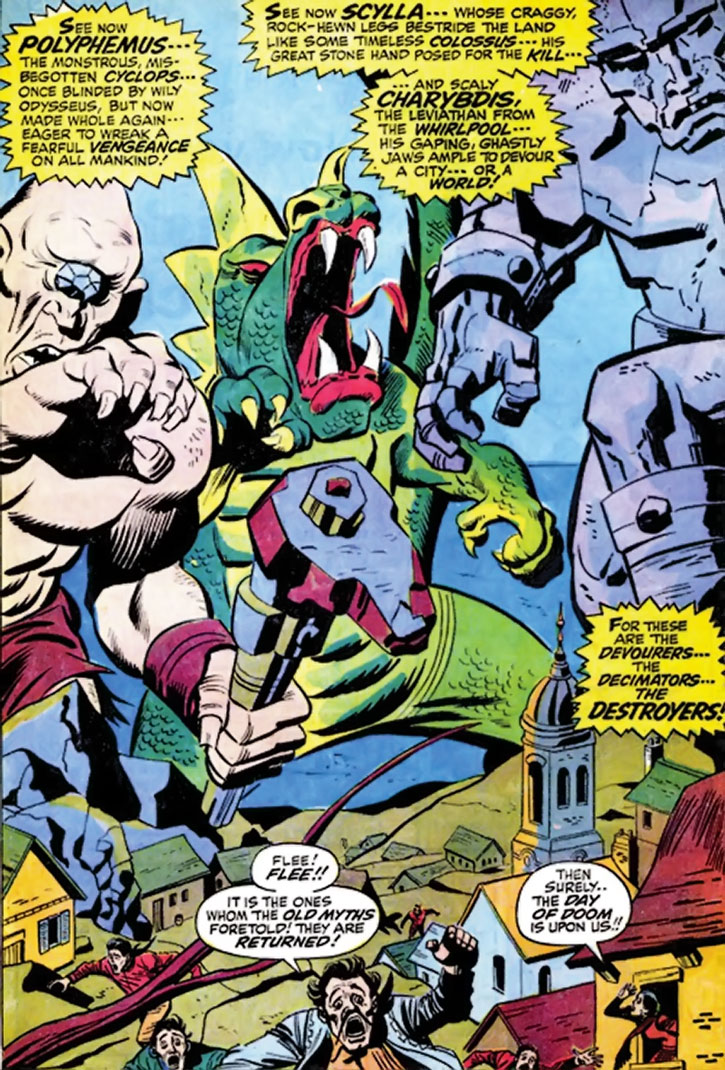 During his last appearance, the Huntsman received authorization to conjure weapons from Hades itself.

He thus produced a spear of flame with the following stats: Spear of Hades Flame [BODY 12, Paralysis (Area of effect 2 APs): 15, Grenade Drawback, Limitation: Paralysis drops to 06 APs against non-Olympians] which he threw at the Champions, taking out both Hercules and Aphrodite.

Since the spear proved ineffective against mortals, he then summoned (“Slain by Zeus’ dread thunderfire — rebel thou were and so thou died / But now, o Titan from Hades’ mire, arise to do battle at my side !”) the Titan Menœtius.

Finally, while allied with Pluto, the Huntsman conjured allies of his — the mutates from the atomic future. 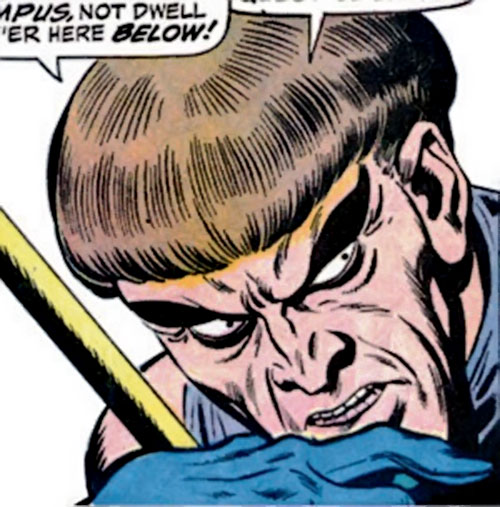 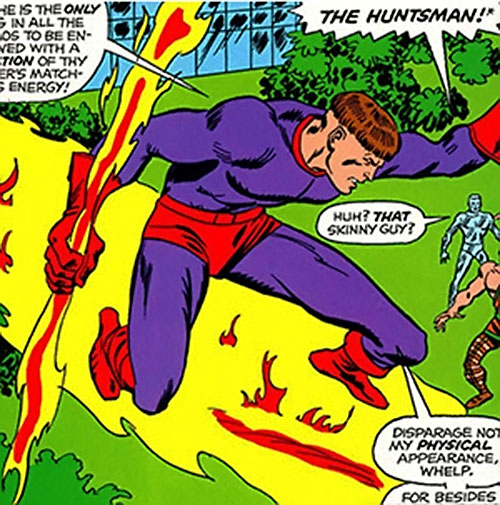 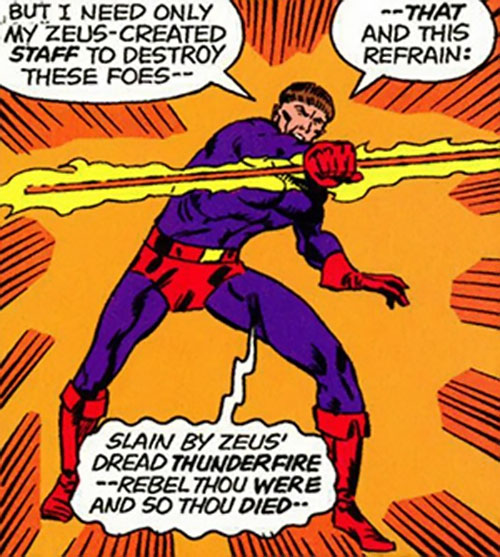