Hurricane Max can create small hurricanes in his vicinity. These will batter his foes and demolish some obstacles with powerful gusts of air.

He once burst though the floor in this way, and can easily send multiple people flying.

Max once had a “dead or alive” bounty offer on his head. It was going to be collected by the first Deathcard. Barb Wire struck a deal with Max. She would stop Deathcard before he blew Max’s head off, and Max would surrender to her so she could collect the bounty.

Barb and Max neutralized Deathcard, but Max attempted to renege on the deal while Barb Wire was pinned under rubble. He was almost immediately captured by the waiting Machine.

Max presumably ended up in prison, since he wasn’t seen during the next meetings among the Prime Movers.

Likewise he wasn’t around (though his gang was still active) during the 2003 trouble with the second Deathcard. Presumably the other Movers ran his gang whilst he was in prison.

Max seems more concerned with looking cool than by wantonly killing people. Though of course he remains a brutal, double-crossing gang leader.

He insists on using tons of cowboy slang and turns of phrase, sometimes to the point of unintelligibility (at least outside of his gang).

“That polecat dee-jay is feedin’ off our range. I catch you boys lissenin’ to his show again, you’ll be spending the summer ragged out in gauze and plaster.”

“Mil gracias for rounding up that fella for me, Barb darlin’. Saved me a peck a trouble, it shorely did. You know, last night, when Eldin brought you ’round, I was madder ’n’ a wet hornet. But he was right about you. Yer good people.” 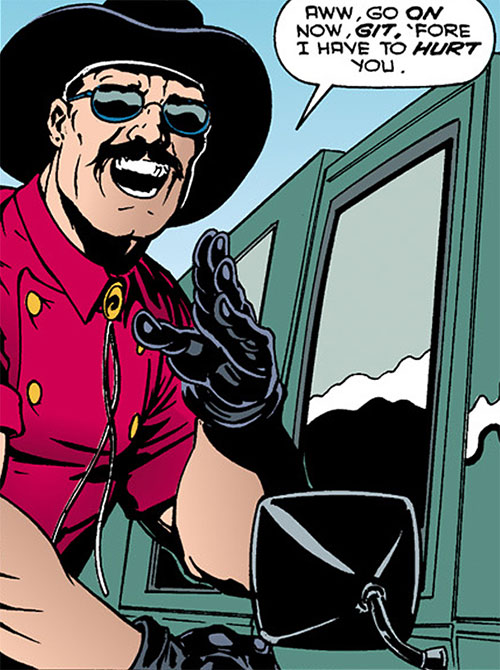