Fast and deadly, Hussar wields a rather dangerous neuro-whip – and pretty much never misses with it.

Like all other Guardsbeings, she has a Flight implant.

Hussar first appeared during the historical fight between the X-Men and the Imperial Guard on the Blue Area of the Moon. This battle determined the fate of the Phoenix (then thought to be Jean Grey). Hussar surprised Storm while she was fighting Earthquake, bringing her down from behind. This allowed Earthquake to finish Storm off.

Hussar later sided with the ambitious, traitorous Shi’ar Admiral Samedar. She came with other Borderers from the Imperial Guard (including Fang, Webwing, Warstar and Neutron – then called Quasar).

This might be to prevent what happened in Samedar’s case. Hussar’s unit of Borderer Guardsbeings apparently felt more loyal to their Admiral than to the Imperium, especially after Samedar claimed that Lilandra was dead.

At any rate, Hussar and her teammates fought against Nightcrawler, Kitty Pryde and a small detachment of Imperial Guardsbeing. The fight didn’t go their way, mostly due to the presence of Gladiator himself. Thus, Samedar was forced to zap everyone with a Brood super-weapon.

Having captured the loyal Guardsmen, he rebelled and attempted to destroy Earth. But Samedar’s attack was intercepted at the last possible second by the other X-Men and the Starjammers.

The Imperatrix Lilandra confirmed she was still alive and addressed the renegade ship. Much of Samedar’s crew thus became loyal again. The exact fate of Hussar is unrevealed. But since she later appeared as a Guard member it is likely she claimed to have been deceived by Samedar.

When Deathbird usurped the throne from the rightful Imperatrix, most if the Imperial Guard reluctantly served her. Hussar was part of an unit (along with Warstar, Neutron, Manta and Zenith) that teleported in when Lilandra made her attempt on Deathbird’s life. But the Starjammers teleported Lilandra out before she could kill Deathbird… and before the Guard could kill her.

Binary then perforated the part of the ship they were in. While Hussar and other Guardsbeing were busy rescuing the troopers before they would be sucked into space, Deathbird ordered them to stay with her and teleported away.

Deathbird then sent the Guard unit against the Starjammers, who were still nearby. Hussar engaged Hepzibah. The fight was mostly even until Raza cut off her electro-whip with his sabre. Hussar was defeated.

Hussar next appeared during Operation : Galactic Storm. She was one of the Guardsbeings protecting the Imperatrix. They received a delegation of Avengers led by Captain Marvel (monica Rambeau), but this turned ugly due to attitude from Thor (Eric Masterson). A brawl erupted between the Avengers and the Guard.

Hussar immediately choked Captain Marvel with her whip. Starfox jumped her and managed to make her turn her focus and him, but Hussar used her strength and threw him clear across the room while ignoring his… psychic powers. Hussar then snared another Avenger with her whip. But Miguel Santos then turned into the Living Lightning, shocking Hussar unconscious.

After the brawl was defused, both Avengers and the Imperial Guard defended the Majestrix against a surprise assault by the Kree Starforce. As the Supremor was about to kill Imperial Guardsbeing Titan, Hussar struck with her whip.

While this proved insufficient to stop the powerful android, the Living Lightning came in and again used Hussar’s whip as a conductor, shocking the Supremor unconscious.

When next seen, Hussar was a prisoner. She had been exiled to Earth along with other Guardsbeing, including Neutron, Webwing and Warstar. It is thus possible that facts about her previous allegiance to Samedar resurfaced, leading to her condemnation along with the other conspirators.

The condemned Guardsmen teamed up with one of the few surviving D’Bari. This is the race species that had been exterminated by the Dark Phoenix.

Said D’Bari, Star Hammer, convinced them to kill Jean Grey for looking far too much like the Dark Phoenix. The Guardsbeings pretty much defeated Cable, but Hussar’s electro-whip was then destroyed by Gambit. Though the ex-Guards were defeated, they ran a diversion long enough for Star Hammer to confront Jean.

When last seen, Hussar and other former Samedar loyalists had been reinstated in the Imperial Guard, and fought fiercely to defend the Imperatrix during the failed attempt to integrate the Inhumans within the Shi’ar Imperium.

Like most Imperial Guardsmen, Hussar has a military mindset and is mostly businesslike. She tends to attack from behind.

“Release him, Supremor ! No warrior should be subject to such perverse degradation ! My neuro-whip will see to that !”

The Imperial Guard is deliberately inspired from the Legion of Super-Heroes. A case can certainly be made for Hussar being an odd reflection of Dream Girl.

Bonuses and Limitations:
Mental Field is Self Only, and Always On.

This works even if the ’jammers are not their sole opponents – for instance, they cannot spend HPs to attack or defend against a joint force of Starjammers and X-Men. 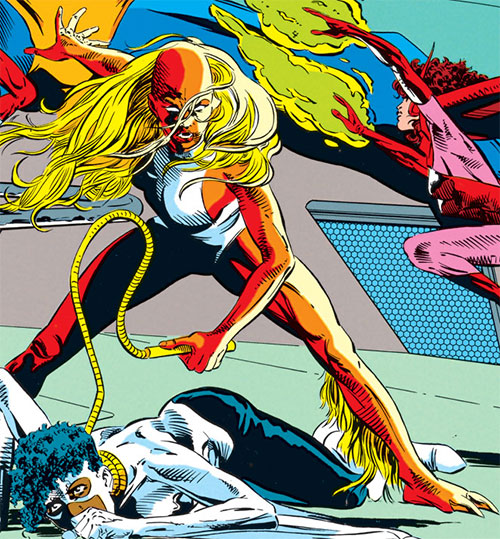 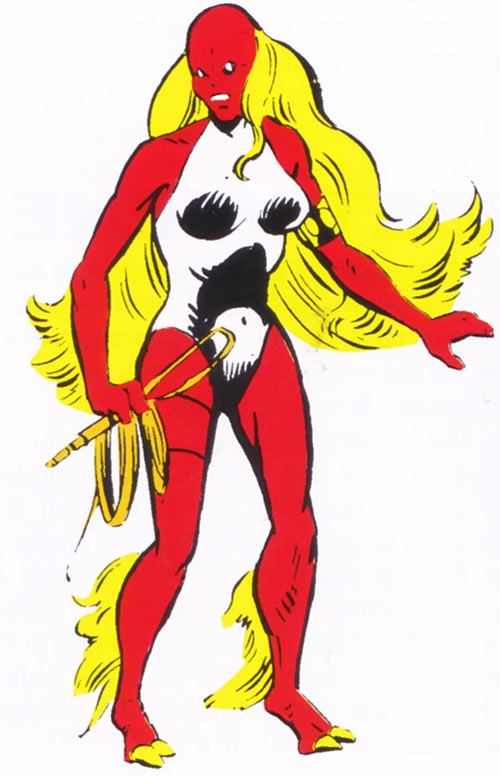