The Eastern Color Printing company once printed large comics runs. From the mid-1930s to the mid-1950s they also published their own fare, in a variety of genres.

Their Golden Age  super-heroes fare is a good example of lesser-known, less influential 1940s material. Here are notes about a character who’s C-list event among that roster. These drew from the long-since defunct Prescription For Excitement web site.

Hydroman chiefly appeared in Reg’lar Fellers Heroic Comics. It was titled after a popular 1917-1949 comic strip about a gang of kids.

Hydroman can become animated water by touching a liquid. In his watery form, he can surge through the air like a stream or travel like a waterspout. He can drown his enemies or hide from them inside a water pipe.

When he flies, the lower part of his body seems to be liquid.

Bob Blake’s life changed forever during a visit with his friend, Harry Thurston, “a young chemist who devotes all his spare time to constructive invention.”

“Glad you came, Bob. I think I made an important discovery ! I just mixed a chemical that transformed my hand into a waterspout — yet there’s no pain.” As Bob examined the water spurting from the stump of the chemist’s arm, he was accidentally splashed with the chemical catalyst. Bob instantly went up “in a geyser of water !”

After being collected in a puddle of water, Bob was restored to human form by an antidote. Fascinated by the transformation, Bob decided to let Harry inject the solution into his bloodstream so that he could turn his body into a stream of living water at will.

Harry urged Bob to wear a disguise. “Look, I’ve got some full-length tights here, part of a masquerade costume — why don’t you wear them with a pair of high boots ? Might as well look in character !”

“You can have my service automatic and the aviator’s helmet and goggles — they’ll help with the disguise.” Bob’s girlfriend, Joyce Church, watched him dress up in his new costume and, in a burst of refreshing realism, told him: “You’re a nut, Bobby !”

“It’s not so funny, Joyce ! This discovery is really revolutionary. Wait’ll you see what I can do with it ! From now on you can call me HYDROMAN !”

Hydroman appeared in Heroic Comics #1-31, teaming up with Rainbow Boy in issues #19 and #25. In issue #19, he foils a variant on mail bombers and then helps Rainbow Boy stop some alien invaders.

He wears a “translite” suit which looks like normal clothes, not a skintight costume.

He likes uttering water-themed quips such as : “Your story doesn’t hold water,” “You’re all wet,” and “He took a soaking.” etc. 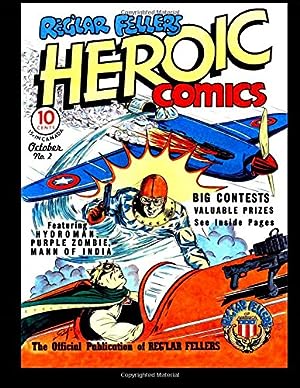