Hydro-Man has the ability to transform his entire body into water. While in water form, most things pass through him without hurting him. He also can hurl himself great distances in this form, and travel through water pipes anywhere in the city (or in the sea) at extreme speeds.

He can also hurl water from himself at great speed and strength against an opponent. However, he occasionally needs to replenish he watery reserves to remain in humanoid form (though he can clearly expel far more water than his form could possibly contain, without ill effect).

If he ever gets the chance to absorb further water into his body he will grow in size gaining the accompanying increase in weight and strength.

His watery powers and body are somewhat susceptible to heat and fire-based attacks. A worst case scenario will change him entirely into steam. His powers, additionally, can also be neutralized completely if he ever is immersed in a being with a mineral body. Basically, he runs a risk of becoming a pile of wet sand.

None of these limitations, however, is a fatal problem for Bench. He has such a powerful control over all his molecules, that, apparently regardless of degree of disintegration, he can still pull himself back into existence at a later point.

Being a petty seaman and former thief and now supervillain, Bench retains some skills as a thief and in seamanship.

Petty seaman and thief Morris Bench used to be a laborer on a ship involved in an energy experiment. Bench was transformed into the Hydro-man when he was accidentally knocked into the water by Spider-Man during the testing of a new under-water generator.

An unlikely set of circumstances including the failure of the device and the presence of the undersea volcanic gasses lead to a situation whence ’the energy conversion reaction within the device combines with the gasses in the water to form an energy for which there may never be a name‘.

That is to say – it was a one-in-a-million situation which created the Hydro-Man. It’s too extraordinary to try to explain and it’s impossible to reproduce.

Bench got back on dry land, but felt strange. He began to literally sweat floods and finally became a pool of water himself. After a while Bench drew himself together again into human form, but was quite enraged by the event.

He set off after Spider-Man for vengeance, but not knowing where to look Hydro-Man transported himself fast around the water system of the city, searching everywhere.

The sightings of a being calling himself Hydro-Man looking for Spider-Man finally reached Peter Parker himself, who changed into Spider-Man and went after the Hydro-Man. When they finally met it was on the roofs of New York during a hot summer day.

Spider-Man tricked Hydro-Man into following him over the roofs during which Hydro-Man himself slowly evaporated away. The fight ended when Hydro-Man completely changed into a cloud of steam and disappeared.

Much later Hydro-Man managed to pull himself together again only to fight Sand-Man this time (since they wanted the same woman). That fight ended when both became a pile of wet sand.

Later he managed to pull himself together again, and joined the group of Spider-Man enemies known as the Sinister Syndicate, but again met with failure.

Hydro-Man remains at large to occasionally resurface to plague Spider-Man in particular and humanity in general.

Hydro-Man is quite a big man that looks like a petty thief in brown trousers, a T-shirt and a pair of shoes. He looks very ordinary except when he begins using his powers.

Hydro-Man is a superpowered thug. He will pick a fight with someone just because he’s bored. Hydro-Man hates Spider-Man for his part in his own transformation as well as the Sandman for rivalry reasons. 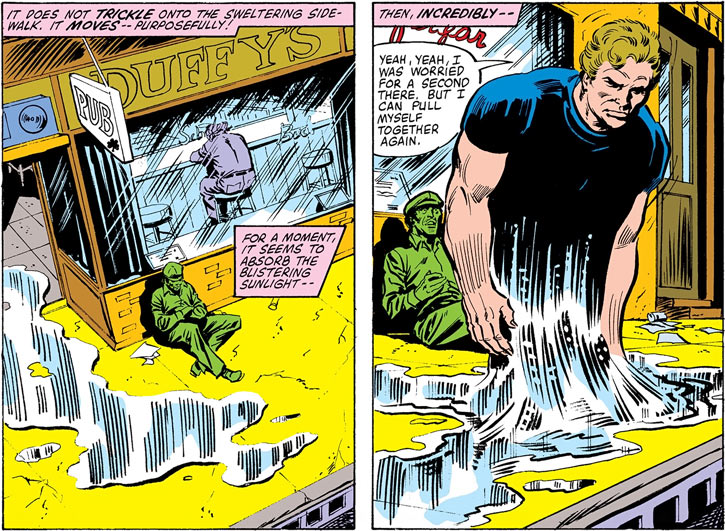 Not being exceptionally bright himself he has few plans himself and is often a follower instead in a gang that allows him to be nasty.

Hydro-Man likes to fight and will do so unless it’s absolutely clear that he’s overpowered.

“Ugh… Sandman gave me a beating ! I’ve gotta jump someone weaker ! And there is an easy target, the woman !”

Hydro-Man is no big-shot and as such could easily be inserted without much notice into the DC Universe while keeping his origin intact. Hydro-Man could be a foe of another water-based being such as Aquaman, etc.

Considering his hatred other shapeshifters he could easily be put against Amazing Man, Metamorpho, etc. It wouldn’t be very nice to put Hydroman against a flame wielder…but why not let him face Aquaman himself ?

Advantages:
Life Support (Does not need to eat or sleep).

Drawbacks:
Attack Vulnerability (-2 CS OV/RV against fire-based attacks), Loss Vulnerability (Hydro-Man must replenish his water reserves occasionally ; if he fails to do so begins to lose APs of All Powers and Physical Attributes at a rate depending on the rate of water loss), Loss Vulnerability (If Hydro-Man ever comes into contact with a character of mineral body (such as Sandman) he runs a risk of becoming a pile of wet sand ; whenever such contact occurs, play Hydro-Man as if he had a Catastrophic Power Burnout on all powers (except Invulnerability), failure means that he is changed into a mindless pile for a very long time). 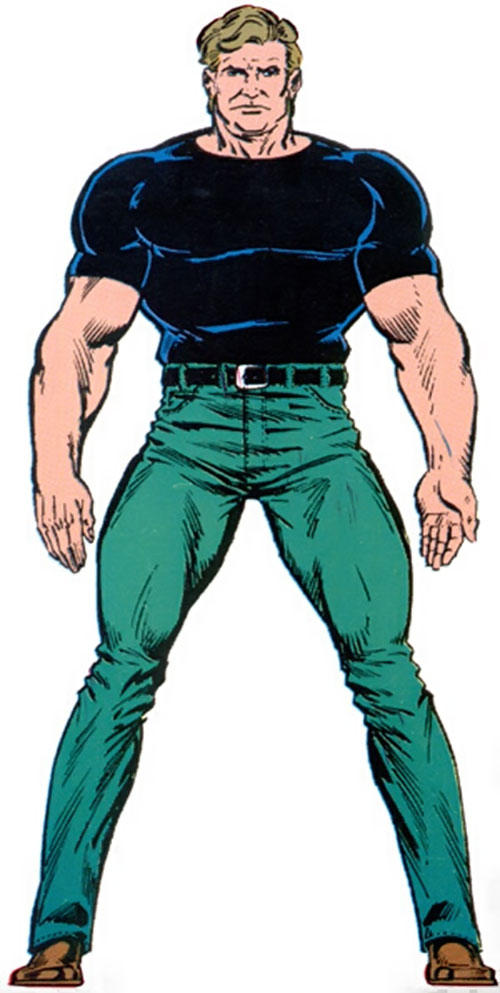