Hypno relies on several devices giving him hypnotic control over people by means of sound. His backing band further augments this effect. He can hypnotize people that listen to his music into “sleeping standing”, and give them simple orders they have to obey.

Usually he tells them to give them all of their belongings. Then to forget everything that happened, and that the concert is over.

From his time on the streets and his time as an artist Hypno is also an able thief, dancer, singer and guitarist. He’s also quite adept at brawling.

Hypno also carries several small gadgets which are of use during his crime sprees. For instance:

Said gadgets are apparently of his own design.

Of course this profile needs a soundtrack. Don’t be silly. Let’s have a wonderfully dated, classic bit of French Disco with Patrick Hernandez.

Hypno-Hustler is a robber and a self-proclaimed disco king. He robs his entire audience during his concerts. 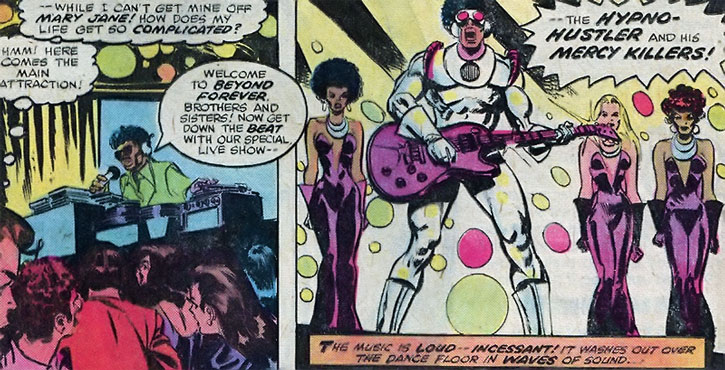 “Hypno-Hustler”, Hypno in short, is his stage name. It’s known that he used to live on the street, and has been in prison. He worked for years to create devices that allowed him to control people by means of sound.

He eventually met a trio of women singers calling themselves the Mercy Killers. For some reason, the Killers could augment his powers further. Hypno and the backing singers work together, but it seems that he keeps them under hypnotic control to ensure their cooperation.

While performing and hypnotizing the audience at the Beyond Forever Disco in NYC, Hypno happened upon Spider-Man. Spidey blocked his own hearing to ignore the hypnotic effect, then easily defeated him. The Hypno-Hustler is now probably in jail serving a long sentence.

The Hypno-Hustler wears a fanciful performance costume. He is clad in full body covering white clothing with white boots, gloves and a neck piece resembling a loudspeaker. Hypno also wears a headpiece in white that covers his ears, and goggles with an “hypnotic” pattern. 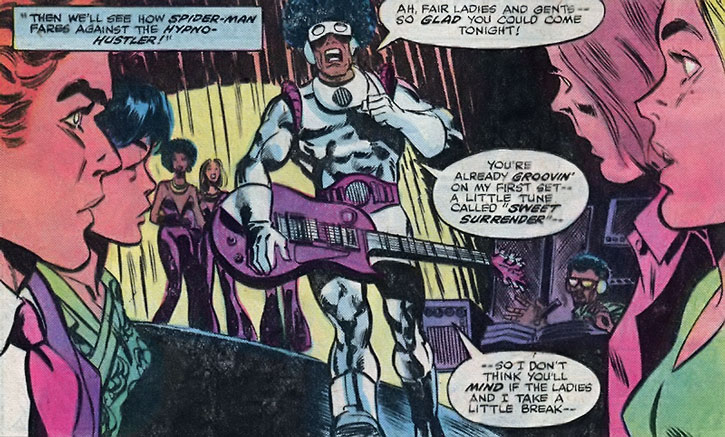 The only other color is a purple belt, and two purple rings around his shoulders. He always also carries a purple-white guitar.

His hair is done as a vintage afro and he sure looks the part of a true disco artist. Hypno is slender and agile, but still muscular. Of course he uses typical 1970s disco lingo…

Hypno cares for little except the money he can get from his hypnotic performances. If he can get money by cracking into the safes of the employer it’s a bonus.

He likes to shout a lot even when not using his powers and usually feels quite safe while robbing the audiences. He is persistent, but can be a coward if faced with the threat of defeat by a superhero.

Even though he puts his band of women under hypnosis to increase his powers he seems quite fond of them.

The Hypno-Hustler is small fish and can thus be put into the DC Universe with no great effort. Just place him in a disco or bar the player characters are in and the adventure is underway, unless, of course, they have low Will scores…

If that is the case, be careful. There’s nothing more humiliating than being defeated by a guy named Hypno-Hustler during an insufferable disco comeback. 🙂

Notes: Hypno usually sings while using his powers. It is very probable that all of Hypno’s powers are part of the glasses he wears ; if you prefer this approach then simply put all Powers, Bonuses and Limitations onto a pair of Glasses as an Equipment. 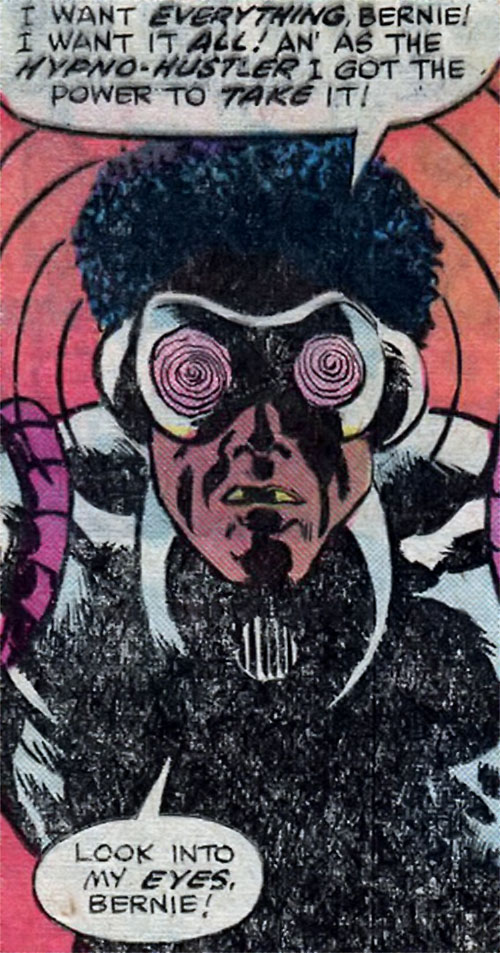 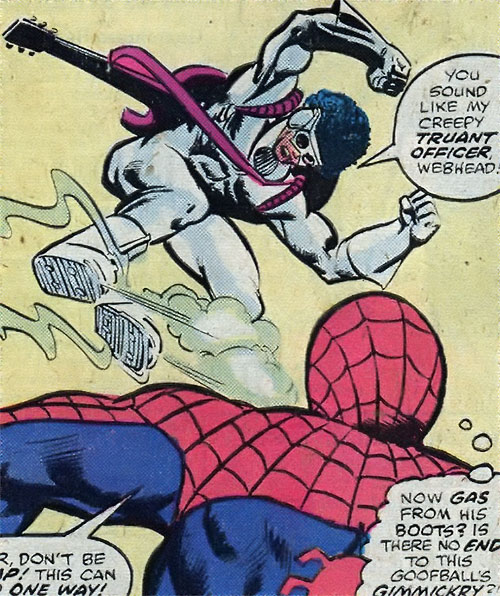