Hypnota is an accomplished stage magician. She also can shoot “blue electric rays of dominance” from her hands or eyes. Those hypnotic rays could dominate everyone, except a ready Wonder Woman.

Hypnota is helped by her identical twin sister Serva, whom she keeps under her mental domination. Hypnota will often pass herself for her sister and vice versa.

Since Hypnota is usually disguised as a man (complete with fake goatee and moustache) and Serva usually wears girly clothes, people are almost always fooled by the substitution. Furthermore, both sisters are quick change artists. Switching places and roles used to be a common trick in their act.

Hypnota the Great adopted that name as she and her twin sister started a career as stage magicians. Hypnota, the prestidigitatrix, disguised herself as a man clad in vaguely Middle-Eastern clothes and sporting a phoney French accent. Serva was the graceful assistant.

They used classic stage magician tricks. But these were supplemented by their strong resemblance, which they combined with small smoke bombs and quick-change artistry to “switch places” as they quickly disguised as one another.

One day an accident happened – Serva shot Hypnota with the wrong revolver, the one with the live ammo rather than the blanks. Shot in the head, Hypnota was treated by the famous surgeon Dr. Keene. Keene “performed a rare brain operation involving Hypnota’s emotion centres”.

Somehow, this operation had the side effect of enabling Hypnota to emit beams of hypnotic blue light from her eyes.

Using her new power, Hypnota the Great established an underworld empire centred on slaves-trading. Said slaves were hypnotised into remaining helots. Her main customer became the people from Saturn. They needed Earth slaves but had signed treaties with Earth stopping the open slave trade after Wonder Woman’s intervention. 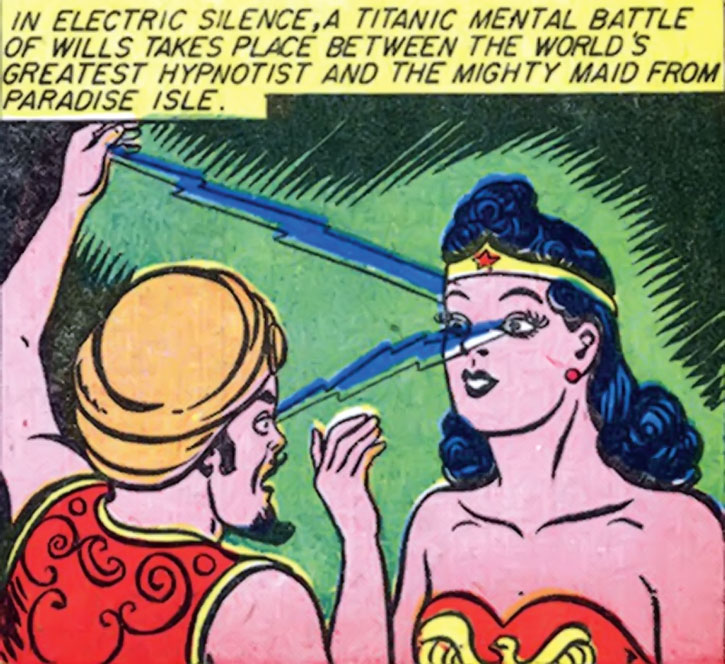 In 1944, Hypnota started plotting to re-ignite the war between Saturn and the US. Her goal was to have the treaty cast aside, to revitalise her slave trade. Hypnota stole the US contingency war plans against Saturn by hypnotising Steve Trevor, but Wonder Woman stopped her.

The Amazon then confronted Hypnota on stage, demonstrating that she could resist “his” hypnotic powers. Nevertheless, she was captured. Wonder Woman freed herself and captured Hypnota, but it turned out to be Serva who had been compelled to disguise herself as Hypnota.

Serva was glad to have escaped from Hypnota. But the magician found her sister again, and Diana Prince sent Serva to Holiday College, hidden in a trunk. Serva joined the Holiday Girls, but Hypnota had had time to hypnotise her. Thus, when Serva learned that Wonder Woman would likely help the Holiday Girls during an incoming ice hockey match, she was compelled to go report this to Hypnota.

Hypnota, passing herself for Serva, arranged for the game to be nearly lost so Wonder Woman would have to play. She then used her distraction to hypnotise the Holiday Girls and skate away with them to refill her stock of slaves. And it would have worked too, were it not for this meddling Wonder Woman !

However, everybody was tricked into thinking that Hypnota was actually an hypnotised Serva carrying out Hypnota’s orders. The mesmerist thus escaped.

Hypnota continued to try re-igniting the war with Saturn, using two pilots in a stolen USAF bomber to attack the Saturnic ambassador. Wonder Woman foiled the attempt and had “Serva” lead her to Hypnota’s lair. ”Serva” changed into Hypnota and used her powers to blindside and capture Wonder Woman.

Of course the Amazon ended up escaping. The war between America and Saturn was prevented, Hypnota the Great was captured and Serva was set free. Hypnota was imprisoned in the Transformation Island of the Amazons.

Some years later, Hypnota was freed from the Amazonian gaols by Eviless. The magician joined the Villainy, Inc. group that the Saturnic girl assembled. They were defeated but half the group, including Hypnota, nevertheless escaped. 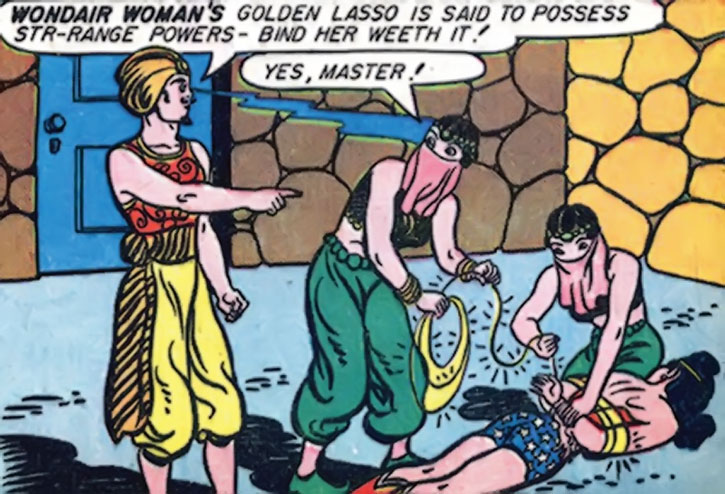 Hypnota teamed up with fellow escapee Zara, high priestess of the Crimson Flame. Zara resurrected her cult with Hypnota’s help. Hypnota was the new face in the Flame, and could employ her hypnotic powers even as such.

Wonder Woman did find their HQ. But she was felled by Hypnota whilst disconcerted by Zara’s trick flames. They tried to force their captive to kill a slave so she would be wanted by the law. However, thanks to the Holiday Girls WW freed herself and defeated the two former Villainy, Inc. members.

Hypnota was also a member of the post-Crisis 1948 Villainy, Inc. (see that team profile).

A character similar to Hypnota is a member of the first post-Crisis version Villainy, Inc.. We probably can assume that she’s Hypnota in most important aspects.

Her name is now Hypnotic Woman for some reason (perhaps tied to IP issues), and her costume is different. Furthermore during that appearance she wasn’t disguised as a dude since, well, there was no reason to.

Power hungry, ruthless crimelord with a cruel streak. Hypnota unhesitatingly wreck lives and thinks escaping from the law is great fun. Especially when she does so by fooling everyone into thinking she’s Serva.

(On stage) “And now, my friends, I weel hypnotise anybody who daires step upon thees stage – I challenge any man or woman to reesist my hypnotic powair !”

Hypnota of the blue rays

Bonuses and Limitations:
Weaponry (Blackjack) only when performing Surprise Attacks and Blindside Attacks with it.

Advantages:
Confidant (Her identical twin sister Serva, though she only obeys her due to Hypnotism), Expertise (Quick-change artist).

Serva is Hypnota’s identical twin sister. Though she wishes to be free, Hypnota keeps her under her unbreakable hypnotic control. Being her assistant on stage, Serva seems to have many of the same Skills as Hypnota, and my guess as to her stats would be :

Though it was Serva who was seen picking locks, I assumed Hypnota could too.