Along with other Fawcett characters bought by DC, he was first considered to live on Earth-S, then New Earth.

To use the Ibistick, its wielder must tell it what to do. It will then interpret those commands however it desires, like a slightly less whimsical version of Johnny Thunder’s Thunderbolt.

For example, during the Earth-1/Earth-2/Earth-S cross-over, Ibis told the Ibistick to turn Brainiac’s weapon against him. The Ibistick turned Brainiac’s ray weapon into a metallic octopus that attacked Brainiac.

The Ibistick is powerless against magic. To combat magical creatures, Ibis had the Ibistick create a sword and shield for him, as the Ibistick could not simply blast the monsters to dust. Likewise, a demon enchanted a cave’s walls and ceiling; this would have trapped Ibis, except that the floor was not enchanted, allowing him to tunnel out through the floor.

This limitation seems to have vanished post-Crisis. The stick was able to affect the Rock of Eternity as well as the Seven Deadly Enemies of Man.

The Ibistick will do no harm to its master (Ibis). For example, when Ibis thought Taia dead, he commanded the Ibistick to strike him dead, but it would not. Likewise, in the hands of an enemy who seeks to do harm to Ibis, it will turn against the enemy, doing to the enemy whatever the enemy wanted done to Ibis.

However, the Ibistick will work for anyone who holds it. A Chinese soldier was able to use it for good, though when he said, “I wish it [the Ibistick] was in the possession of one who understood it better,” it appeared in the hands of one of Ibis’ enemies.

Likewise, Taia was able to use the Ibistick in another story.

Here is a partial list of the feats which the Ibistick performed in Ibis #1:

4000 years ago, Ibis was a prince in ancient Egypt, whose uncle told him that he must prove himself in a crisis before the uncle would give him the Ibistick.

Meanwhile, the Black Pharaoh comes into power, and wants to rule over everything. He even has designs on Ibis’ beloved Taia.

Ibis’ uncle comes to him in prison. Deciding that Ibis has shown courage, he gives his nephew the Ibistick. Ibis uses it to overthrow the Black Pharaoh’s monstrous henchmen, demonstrating that evil can not stand up to courage.

A stick in time

Set abandons the Black Pharaoh, but the Black Pharaoh still struggles against Ibis. During the battle, one of the Pharaoh’s men shoots Taia (who interposes herself between the arrow and Ibis) with an arrow that will cause her to sleep for 4000 years.

Ibis slays the Pharaoh, and then puts himself to sleep for 4000 years with the Ibistick. He awakens (swathed like a mummy), in a museum in “a twentieth century American city”.

The Ibistick dresses him in modern clothes, and he seeks out Taia, also a mummy, in Egypt. Now that they are together again, Ibis decides to fight evil in the modern world.

He wears a dark suit with a red turban. The Ibistick is a thin yellow stick with an odd shape at one end, consisting of a trapezoid embossed with a picture of an ibis (the bird).

He’s the typical inscrutable mysterious occultist, but one who is dedicated to stamping out evil.

Post-Crisis, Ibis seems to have lost some determination and desire to stamp out evil. He sighs a lot, does things reluctantly, and generally just wants to go back to sleep.

“Evil dreams are sometimes good—because we know they are nothingness !”

Equipment:
Ibistick [BODY 12 INT 02 WIL 02 SPI 15, Sorcery: 25, Awareness: 18, Limitations: Sorcery cannot directly affect anything magical (this Limitation vanished after Crisis), Bonus : if someone commands the Ibistick to do harm to Ibis, the Ibistick will instead cause that harm to affect the commander ; the Ibistick will often sense danger and warn of it.].

I considered giving the Ibistick the “Fabricate” power (which is in 4th…er, I mean, Sidekick) as well as Sorcery, since it is used to create objects out of thin air quite frequently. However, it is possible that these objects are summoned rather than created. 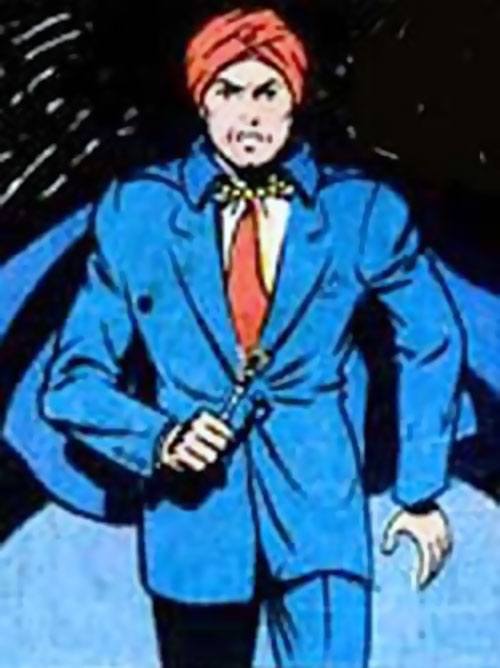